When Sophie Hansa is dropped into the archipelago world of Stormwrack, she is faced with a challenge: Is she dealing with magic, or science? An alternate world, or the climate-ravaged world of the future? Along the way she has adventures on the high seas that include murder mysteries, investigations, and the occasional romance. Alyx Dellamonica weaves a thoroughly original trilogy with these novels, beginning with Child of a Hidden Sea, continuing with A Daughter of No Nation, and culminating in the just-released The Nature of a Pirate.

I caught up with Alyx to talk about her unique take on fantasy, her inspirations, and more. 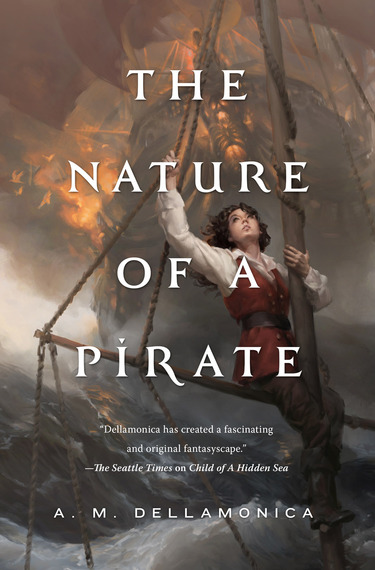 This series is hard to categorize: There are elements of fantasy, science fiction--even forensic mystery for good measure. Can you comment on this fusion of elements in your work?

I write books about contemporary earth dwelling human beings, many of them North American, and most privileged to have had a pretty decent education. Then I take these people and confront them with magic.

I'd like to think that if Gandolf the Gray or Hermione Granger showed up in present day Mumbai or Amsterdam, and began performing miraculous feats for the benefit of CNN and all comers, someone would run a Geiger counter over them, grab blood samples, ask them to make light with their wandy-staff things a few thousand times, under various controlled conditions, and run a study on how they get those moths and snakes to do their will.

Most of us believe the world is somewhat explicable, in other words, and I want at least some of my present-day characters to grapple with that possibility that magic could be understood. Fictional heroes cave in too readily, in some stories, to accepting that the laws of the universe are radically different from our own.

In the case of my trilogy, Sophie Hansa and her brother are actual scientists, which dials this trait up significantly.

I also think magic shouldn't be able to do everything, and one of the areas where it tends to fail on Stormwrack is in giving people the tools to solve crimes methodically, using observation and forensics. This is what leads Sophie into solving murders and teaching the Watch the techniques of analyzing fingerprints.

How were you inspired to create the unique ecosystem of Stormwrack?

When I started thinking about this particular project, I made a huge list of everything I love. And, inevitably, some of the things on that list were nerdy as all get out. Microclimates! Biodiversity! The Galapagos Islands! There were also more obviously fun things on the same page, things like tall ships, pirates, police procedurals, mermaids, Mount Vesuvius, constitutional process... and okay! At that point any rational person would have started trimming the list.

But I'd come through a couple of tough years, just around that time, and I decided that I didn't want to give things up. This was my fiction! It should be filled with all the things I find cool, am I right? I made the (arguably) self indulgent decision to see how many of those wonderful elements I could squeeze into one big narrative.

Having said that, the foundation of the book is very much inspired by the theoryof evolution and Galapagos-style biodiversity. Stormwrack is a world with a lot of ocean and comparatively little landmass. Everyone lives on little archipelagos of islands. Each island is a different nation, and whatever it has within its microclimate determines the kind of magic that can work there. If a nation's turtles are even a little bit different, genetically, from the turtles on the island fifty nautical miles away, the magical potential of each species will be radically different.

The character of Sophia Hansa goes through many transitions in the course of this trilogy. Were there moments when she surprised you?

I think of Sophie is being quite sweet tempered in a lot of ways, though she's also quite privileged and a bit intolerant, with a tendency to to judge the nations of Stormwrack by modern US standards. In the first book in this trilogy, she is essentially declared persona non grata on one of the most important island nations, and it's the one her birth mother is from.

I certainly didn't have room to write in a subplot where Sophie throws herself against that particular bureaucratic wall. But the degree to which she's okay with being banned from Verdanni surprised me for awhile. Over time, though, I came to realize this is how she approaches problems that aren't immediate barriers to what she wants: she blithely assumes that if the ban ever does get in her way, she will just overcome it somehow.

This is something I've been thinking about a lot in the last year or so. Human society is built up from a foundation of rules, both written and unwritten ones. Yet everyone chooses a few that, they decide, don't apply to them personally. Many of us feel that speed limits, for example, are kind of a general driver's guideline... as long as you don't get caught.

This is a a basic contract we make with the universe and our civilization, a bit of magical thinking that allows us to rebel a little because we think we can and we feel, for whatever reason, justified. And it's occurred to me that Sophie has an unreasonably large dose of that trait.

Can you describe the kind of research that went into this work?

Sure! I ran all of the scuba diving scenes past two master divers, after it proved impractical to take diving lessons myself. I went on a cruise on a tall ship to learn how to haul sails and steer a wind powered sailing vessel. I had already been an avid amateur nature photographer, so a good chunk of Sophie's professional life was covered by the tens of thousands of pictures I've taken in the past couple of decades. I spent a lot of time at the Beaty Biodiversity Museum at UBC. Finally, for the last book, The Nature of a Pirate, I did a lot of reading on the history of fingerprinting and the propagation of the techniques of forensic policing during Victorian times.

With such a diversity of genre elements in this work, I was moved to wonder what sort of work inspires you. Can you name some writers whose work has been important for your own?

James Tiptree, Junior, for one. Of course there is no comparison, but I'd like to think Sophie is at least distant kin to the characters in stories like "The Only Neat Thing To Do" and "Backward, Turn Backward." (Though not as doomed, of course!)

I love Connie Willis's disciplined approach to research and history, particularly in The Doomsday Book, and Peter Straub for the incredible clarity of his prose, not to mention his penchant for corrupt old men. 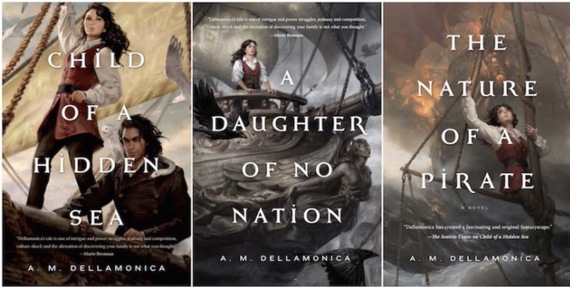 Without giving anything away, the ending of The Nature of a Pirate seems to leave open possibilities for future stories. What are the chances that we'll be returning to the world of Stormwrack?

There will definitely be more of The Gales, the short stories that tie into the series: the next of these is called "Losing Heart among the Tall" and it tells about the lost magical artifact that is at the heart of the mystery in the first book, Child of a Hidden Sea. It will be up on Tor.com on February 22nd.

I would also love to write some kind of series about Bram and Tonio. A lot of my fans really want to see if the two of them can come together, romantically, and they'd make a launchpad for the ongoing political problem brewing within the Fleet of Nations: a perhaps-inevitable battle between the slaveowning nations and the free ones.

Finishing a trilogy was a big effort and now that it's done, I am taking advantage of the chance to write more short stories, while considering my next big project. I have a few book concepts on the go and am pondering which of them I like best. One of the funny things about putting the entire long list of everything I liked into Stormwrack is that I may need a whole new list for the next thing! Luckily, I'm picking up new passions all the time. 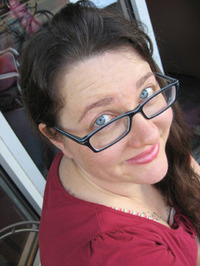 A.M. Dellamonica's first novel, Indigo Springs, won the Sunburst Award for Canadian Literature of the Fantastic. Her fourth, A Daughter of No Nation, has won the 2016 Prix Aurora. She is the author of over forty short stories, appearing in Tor.com, Strange Horizons, Lightspeed and numerous print magazines and anthologies. She was the co-editor of Heiresses of Russ 2016. She teaches at UTSC and through the UCLA Extension Writers' Program. Alyx is married to fellow Aurora winner Kelly Robson; the two made their outlaw wedding of 1989 legal, in 2003, when the Canadian Supreme Court conferred equality on same sex couples.