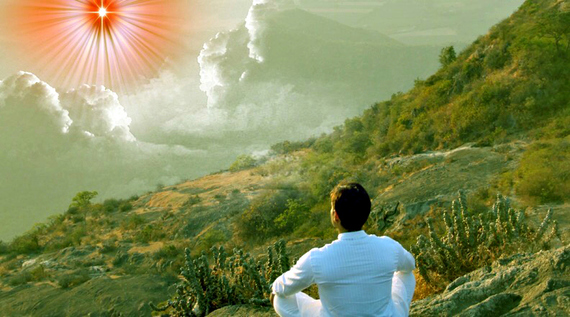 A gathering of people from over 100 countries is here on the mountaintop, Mt. Abu, 5,000 feet above sea level in Rajasthan, India. It is my spiritual retreat and the place where I come to catch up on all the administrative details of my spiritual community, the Brahma Kumaris.

I was amazed after coming all this way, to a land of rich spirituality, that one of the first questions from old friends who are in service in making the world a better place was, "Jen, do you think Donald Trump will be the next president of the United States?!" I paused. I could approach this simple question from so many angles. It's hard for any of us to know, and so we wait for the film and all the actors in this movie called politics to play out their parts.

In my early morning meditation, these thoughts arose and I share them with my purest feelings that they have merit.

I don't know if Donald will win this presidential race, there is still a long way to go. He is, however, touching on many hidden thoughts of some Americans and it is shedding light on the world. That concerns me very much. Do we lose our ability to love all due to theater as a means to get votes and compromise the upcoming generation's ability to see what it is like to hold such a distinguished office and represent the world with dignity? I can't say.

I recently read a Twitter message from Brian Bacon of Oxford Leadership and it spoke volumes. "My heart is with Bernie, but Hillary has my head on healthcare and foreign policy in this debate," Brian tweeted. I wonder what it would take for Hillary to simply win the hearts of the rich, the poor, the indifferent? Perhaps, simply showing her side away from the cameras and the stage. Maybe she could speak from her heart, which might go against some of her commitments to stay the course, and in the process show how human and vulnerable she can be. Perhaps, she then won't challenge the egos of anyone? I can't say.

Bernie Sanders does seem to hold a grandfatherly way, which makes him easily likable. For many cultural creatives who are passionate about the direction of the country, he has won their hearts. However, in a recent Time Magazine article, Senator Cory Booker said that "when it comes to Hillary Clinton... it wasn't even a question. She's profoundly qualified to lead our country during perilous times..."

As with any change, from where we are moving has much to do with where we are going. The nation is preparing to say goodbye to President Obama. Prior to the President's final State of the Union address, Vice President Joe Biden spoke with a group thanking them for their support of the President and noting that President Obama has "more character in his little finger than most people I know have in their whole body."

President Obama certainly does not get equitable public credit through the media or on the Hill, but I have a guess as to why that is. He is living out virtues and bringing virtues to our nation and the world and that is not considered by some to be newsworthy. But I trust it is news in God's heart.

So, my friends, the game of karma is playing out in American politics and as much as I'd love for the most qualified person to sit on that seat of responsibility, it will be left up to the collective karmic story of not only the American people, but of all people who have a karmic connection to America. Do I think Donald Trump will become the next president of the United States and create pandemonium in our world as some fear, I can't say. It is in the hands of drama, destiny and our karmas in the land.

As someone who has been cared for in this country for over 40 years, it is my pure wish that we continue the legacy of virtues and strength of character for this amazing country I call home. I ask everyone to consider the power that lies in slow and steady versus fast and furious.