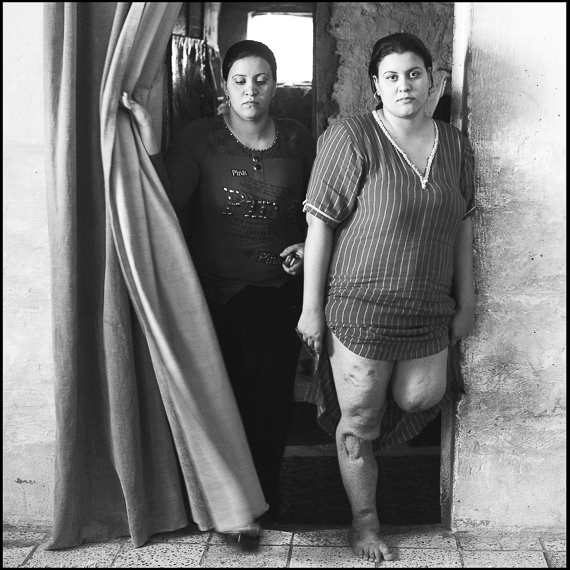 For award winning photojournalist Farah Nosh, there is a photograph that defines the madness of war, and it's one of her own.

"In 2009, I photographed a woman who, through an American airstrike, lost one of her legs, her sister and her unborn child, she was 9-months pregnant," says Nosh. "I spent a lot of time with her, at her home. She had tried to commit suicide a few times. She just broke down crying out of pure depression and sadness. When I look at her photograph, it definitely stirs a lot of emotion for me. I really feel like her tragedy is Iraq's tragedy."

Nosh, 38, who has been featured in Time, Newsweek and the New York Times, began her first day of photojournalism school on Sept. 11, 2001. She knew immediately that she was going to a war zone. As America ramped up its military presence and began a series of invasions in the Middle East, Nosh's career plan was perfectly obvious.

"I didn't really have a backup plan or another option," Nosh says. "It was just clear that I was going to Iraq."

Nosh's first assignment after graduation was for the New York Times, documenting Saddam Hussein's awesome fall from power during the American occupation. She jumped on a plane and flew to Baghdad.

Nosh is a Canadian and an Arabic speaking Iraqi. This allowed her incredible access to a world off limits to almost every other Western photographer. She strapped on a flak jacket and began patrolling with U.S. troops, risking her life to capture the images that might change the world.

"There was an ambush when I was patrolling with the Americans, and improvised explosive devices, I've definitely been around a lot of gunfire too. The kidnappings were definitely the scariest and most dangerous."

After that experience, Nosh began documenting the lives of everyday Iraqis struggling under Saddam's regime and facing the horrors of the American invasion.

"I really felt that my efforts were better spent covering the civilian side of things where I had a unique perspective and an insider's view ... that's definitely where my photography mattered more."

When the American bombs fell on Baghdad, Nosh wasn't with the other journalists in guarded compounds - she was with her family in a basement, hoping to live through the weeks of explosions. She had her camera with her at all times, capturing some of the most moving images of the entire conflict.

Nosh says the art of photography in a war zone comes down to having the lens cap off and being alert. Pre-visualizing your images, the same way a wedding photographer might, is not really an option when the shrapnel is flying.

"You be as ready as you can, with all senses out there," says Nosh. "I always have my camera around my neck with my exposure ready, and you're just kind of welcoming whatever unfolds in front of you. That's what's so exciting about it; you can't really anticipate what's going to happen in any particular moment. I think that's why I loved it so much."

Nosh currently lives in Vancouver. It's been five years since her time in war zones and she admits to missing it, but for now, her family comes first. She's focused on a long-term and distinctly Canadian project: Haida Gwaii in Northern British Columbia, photographing the last speakers of First Nations' languages.