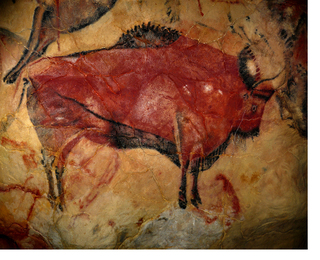 Sometime around 10,000 BC, a prehistoric human smeared ochre paint on a cave wall in a part of northern Spain that would eventually be known as Altamira. The artist painted an image from his environment - a bison - in vibrant burnt orange.

As the artist applied the final brushstrokes to his masterwork, he was unaware that, 10,000 miles to the south, on another continent, ice slowly flowed from glaciers onto an Antarctic sea. The glacial flow eventually formed a colossal ice shelf of 4,800 square miles, creating a backstop against its tributary glaciers, resisting their advance into the ocean.

Thousands of years later, humans would give that ice shelf a name after an Antarctic explorer. The "Larsen B" ice shelf shared its birthday (give or take a few hundred years) with that of the Holocene epoch. As fate would have it, Larsen B and the Holocene share another date in common: both will die at the same time - sometime around the year 2020. 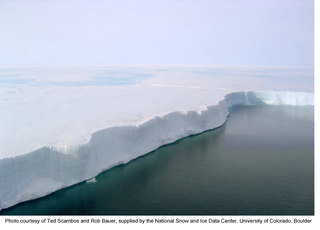 On May 14, NASA's Jet Propulsion Laboratory announced the results of a study, finding that the last remnant of the Larsen B ice shelf is likely to disintegrate completely by the end of the decade. Larsen B is believed to have been stable until the 1950's when a combination of warming air and ocean water began to erode it. This means that a block of ice nearly the size of Connecticut, which existed for over 10,000 years, will have been destroyed in less than 100 years.

As it turns out, the deaths of Larsen B and the Holocene epoch are related.

The Holocene epoch is the most recent of the dozens of chapters that comprise the geologic history of Earth's 4.5 billion year life. The Holocene marked the rise of human civilization, including the Bronze Age, the Iron Age, as well as the dawn of the Industrial Revolution, when humanity lit its fossil fuel bonfire, eventually releasing 350 billion tons of subterranean carbon into the atmosphere. That vast underground carbon reserve, formed over millions of years, was set loose in only a couple hundred - a relative nanosecond in the history of the planet.

All that carbon has spiked the Earth's atmosphere, jacking its concentration 43% since the 18th century from 280 parts per million to over 400 today. Air temperatures have climbed along with carbon levels. In the Antarctic Peninsula, mean annual temperatures have risen a stunning 2.8°C in the past 50 years.

A growing number of scientists argue that human impact on the planet has been so profound that it has actually changed geologic history. They argue that the Holocene epoch has ended, and that a new one, the "Anthropocene" has begun.

"Formally defining the Anthropocene would state that humans are a force of nature at a geological scale, equivalent to plate tectonics or a meteorite strike, or sustained volcanic eruptions," said Simon Lewis, an ecologist at University College in London who made the case for the name change in the journal Nature.

So how do you tell the difference between one epoch and another? The answer is literally etched in stone. For example, meteors that pummeled the Earth 65.5 million years ago sprinkled the planet's crust with Iridium, leaving a telltale marker that defined the boundary between the Cretaceous and Tertiary periods.

We're leaving our own geologic markers, such as 20th century radioactive fallout from atomic bomb testing, lead particles from gasoline, plastic, changes in the fossil record due to mass extinction, as well as myriad effects of increased atmospheric carbon levels. These badges will distinguish the age of man from other epochs.

Figuring out whether or not an epoch has ended is the job of the International Union of Geological Sciences. An Anthropocene Working Group within the IUGS is currently studying the question. If the IUGS writes the Holocene's obituary, that epoch will have set a new world record for the briefest in history. While epochs normally last millions of years, the Holocene's lifespan will have been only 11,700 - about the same as Larsen B. For the first time, one of Earth's species will have artificially changed the course of its geologic history.

Though the end of Larsen B and the Holocene epoch portend global catastrophe, Congress' reaction to the pending disaster has been to avert its gaze away from it.

In May, the House Science, Space, and Technology Committee, chaired by Rep. Lamar Smith (R-Tex.), introduced a new spending bill that would slash NASA's earth science programs by more than $300 million. These are the same programs that track the imminent collapse of Larsen B. To put that $300 million number in perspective, that's 16 times less than the $4.8 billion taxpayers currently pay oil companies in tax breaks and subsidies to produce the stuff that is causing the crisis that congress doesn't want NASA to talk about.

Whether or not humans have killed an epoch seems like a pretty big question, though it's actually trivial compared with this one:

Will the Anthrpocene be Earth's last epoch?

Epochs, like cave art, require humans to define their contours. If we can melt a 500 billion pound block of ice and crush an entire epoch in only 200 years, where will we be in a thousand years? Will we survive the warming world we've created and live to name a successor to the Anthrpocene? Will there still be artists to paint images of their environment as their ancestors did ages ago.

That bison on the wall of a Spanish cave has outlived the artist who painted it by thousands of years. It will outlive an Antarctic ice shelf and an entire geologic epoch. It will also outlive the congressmen who fiddled as their world burned.