There's a striking image by Farida Batool in a current exhibit at New York's Aicon Gallery (reviewed at the New York Times). Seeing it was especially astonishing for me because I know something of the artist and the complexity of her relationship to Pakistan, its history and its images. 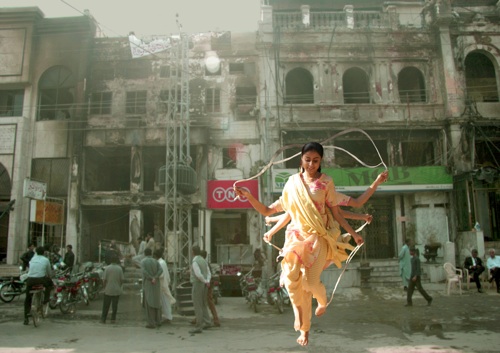 Batool contains one of the many histories of Pakistan and her life and work manifests its many rivulets daily. She is the daughter of a noted Pakistani legal scholar and expert on Shari'a law. At one time he was the lay member of a national council that reviewed statutes passed or proposed by the Parliament to see if they were compatible with Shari'a.

I first came to know Batool after discovering a wonderful book she had written on women and street art in Pakistan, a robust and interesting volume on feminism and vernacular imagery: Figure: The Popular and the Political in Pakistan. I found it on the shelf of a hip coffee house in Islamabad (where I was spending a few days working with the NGO Internews), where you could have tea and rummage among journals and books and newspapers that would otherwise be hard to find.

I asked the manager of the cafe about Farida, and he told me how I could reach her by phone in Lahore (where she was living at the time, and I was, conveniently, heading the next day). I called and visited her and her then husband, Saeed Urrehman, in her father's elegant book-filled study in a sheltered middle-class 1950's or 1960's suburb.

Farida and Saeed were extraordinary young practitioners of critical studies, comparative literature, film, vernacular art and art history. They were both teaching at a relatively new institution of higher education, the Beaconhouse National University. They were pioneers at getting the world's best postmodern texts through Internet file-sharing. They represented to me a kind of margin of intellectual hope in the region.

I have stayed somewhat in touch and watched their paths diverge. Farida is now a PhD candidate in film studies at SOAS in London writing, among other things, about masculinity in Pakistani culture. As the Aicon Gallery exhibit in New York--and others in Dubai and elsewhere--indicate, her career as an artist is taking off. Saeed and Farida divorced shortly after the birth of their son Zain. Saeed went off to Germany for a fellowship and is now back in Pakistan working as a writer and editor.

Farida's image of a Pakistani girl is becoming iconic. The young woman looks as if she captures or typifies some cross between the ordinary and the divine, the ruin and the ritual. She is skipping rope in front of a burnt-out building in Lahore. The piece partakes of Farida's commitment to the vernacular and to dialogue between the religious and the secular, between the personal and the city.

It's a side of Pakistan and its culture that rarely makes it into the American press.