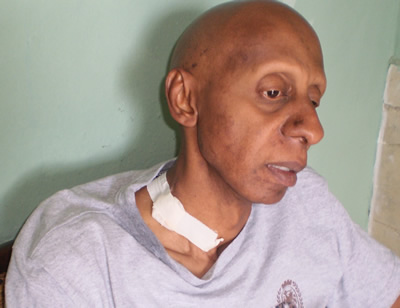 Guillermo "Coco" Farinas, on a hunger and thirst strike in Cuba, for the release of political prisoners who are ill.

To report what hurts us, to write about what we have encountered, touched, suffered, transcends the journalistic experience to become a living testimony. The distance between articles about a man on a hunger strike and the act of feeling his ribs protruding from his sides, is an abyss. Thus, no interview can reproduce the tear filled eyes of Clara, Guillermo Farinas' wife, while she tells me that for their daughter her father has a stomach illness and so grows thinner every day. Not even a long report could manage to describe the panic induced by the camera which, a hundred yards from the home of this Villa Claran, observes and films everyone who approaches number 615A Calle Aleman.

To accumulate paragraphs, compile quotes and show recordings, fails to convey the odor of the emergency room where Farinas was moved yesterday. My guilt for having come too late to beg him to eat again, to persuade him to avoid irreversible damage to his health, is unbearable. On the drive there I wove together some phrases to convince him not to carry on to the end, but before coming into the city a text message confirmed he was hospitalized. I would have said to him, "You have already accomplished it, you have helped to remove their mask," but instead of this I had to offer words of consolation to his family, sitting in his absence in that room in the humble neighborhood of La Chirusa.

Why have they brought us to this point? How can they close all the paths of dialog, debate, healthy dissent and necessary criticism? When this kind of protest, a protest of empty stomachs, happens in a country we have to question whether they have left citizens any other way to show their lack of consent. Farinas knows they will never give him one minute on the radio, that his voice cannot rise up, without penalty, in a public place. Refusing to eat was the way he found to show the desperation and despair of living under a system that gags and masks his most important "conquests."

Coco cannot die. Because in the long funeral procession that is taking Orlando Zapata Tamayo, our voice and the rights of citizens which they killed long ago... there is no room for one more death.

You can support Cuba's remaining political prisoners by signing a petition for their release here.