At just 32 years of age, Farkhunda Zahra Naderi is a Member of the Afghan Parliament, elected to represent Kabul. After starting her education in Kabul and Baghlan provinces in Afghanistan, Naderi completed her baccalaureate and A Levels in the UK and obtained a Bachelor of Arts in Legal Studies from Westminster International University in Tashkent, Uzbekistan. Naderi joined the National Unity Party of Afghanistan to encourage women and youth to participate in politics and was appointed Head of the Party's Women's and Youth Committee in 2007. 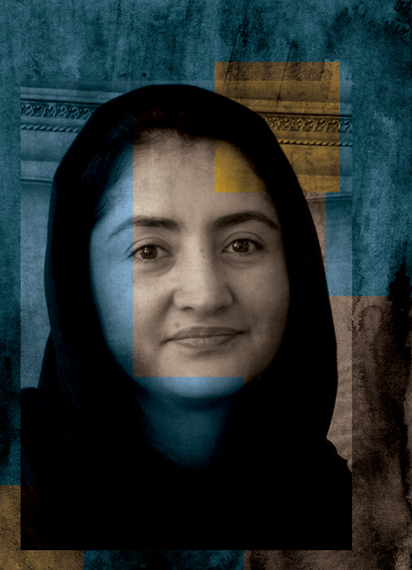 Can you give us an example of a time when your rights have been violated?

When I was growing up, my brother used to boast about how he went out with his friends, played chess, and was generally free to do as he pleased. He wanted me to see and accept the vast differences that existed between men and women. These discriminatory ideas pervade all aspects of our life in Afghanistan; we see and breathe them every day. If men had less of a free hand, and men and women were punished equally for wrongdoings, we would not have any problems. Our society is still a long way from ideas of human rights, equality, and women's rights.

At least now we are talking about women's issues and rights; this is a major achievement in itself. Other achievements are the growth of the media, the holding of elections, and people's participation in their political system by exercising their right to vote.

Democracy is the gate of hope for the people of Afghanistan. Democracy is the reason I can talk about women's rights today. Were it not for democracy, there would not be no space to voice demands for rights and equality for youth and women, or for freedom of expression or anything else. All of these rights originate in democracy. This didn't exist in Afghanistan in the past.

Is there something you are afraid of today?

I am worried by the level of apathy towards the elections in the population. I also worry about security for Afghanistan. But my most fundamental fear is that if people miss the opportunity to go to the polls on election day and cast their vote, they will destroy their own power and the future generations of Afghanistan will look back on them in condemnation.

Though we do have a system of democracy in Afghanistan, there has not been enough energy invested in developing our institutions. For the last 12 years, most attention has gone to individuals not institutions. It is the institutions of democracy that provide services to the people, and ensure that governance is for the benefit of all.

On the level of culture, the biggest problem is the persistence of traditionalism and a belligerent mentality. Some people mistake this for 'Afghan culture', but a culture of war is not the Afghan culture. War is an immoral practice imposed on our people by oppressive leaders for the past three decades. But we have 5,000 years of culture to draw upon. We need to look to our history to clean up the present mess and undo the damage done to our culture in the last 30 years.

Which factors are blocking women's full participation in society?

Our institutions are steeped in patriarchy. I can't see how women will achieve their basic rights as long as the Supreme Court has not opened its doors to women. Women's rights are imprisoned in that institution and it is men who define those rights. Identifying the existence of patriarchy in our system is not to say that we ignore the rights and wellbeing of men. I advocate for women's rights in parliament because women are oppressed. But I also represent and advocate for men's rights. If men are being oppressed, I won't just stand by and ignore it. But our statesmen do exactly this when it comes to women's rights being violated: with respect to half the Afghan population, they keep silent. They do not see; or at least, they don't want to see.

Women need to be represented on the Supreme Court. Violence must be recognized as a national concern. Women need to be recognized in roles beyond being mothers. It is the greatest honour to become a mother, but women are human beings just like men, and they have a right to enjoy a range of roles in society, including and extending beyond parenthood. Women's problems need to come into the spotlight, so that we can understand the causes and find solutions.

What have you done in your personal and professional life to fight against obstacles to women's participation in Afghanistan?

Democracy finds its power in peace, not war. When people stand together against oppression, this is true power. My role is to speak out against oppression. Even when I am speaking to the strongest opponent of democracy and women's rights, I still stand for what I believe in. I tell them: "I respect your views, and you need to respect mine". I combat monopolies on discourse and action. I also work for the empowerment of women by pushing for women's representation on the Supreme Court. This was a taboo subject before, but now it is on the table for discussion and many people are speaking up in favour of it.