If you missed the Super Bowl commercial that reframes the idea of doing something "like a girl" as a compliment (as it should be), I can't recommend it highly enough. But one pork industry spokesperson was also moved by the commercial -- moved to attempt to co-opt the hashtag by blogging about it on Pork Network in reference to what it means to "Farm #LikeAGirl."

There's a major problem with this PR ploy though: In the pork industry and in much of animal agriculture, it's actually the female animals who are the most abused. 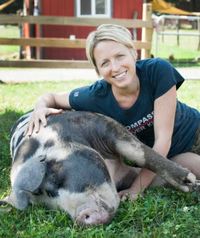 Case in point: Pork Network supports the standard pork industry practice of locking a female pig inside a tiny cage, forcing a human arm deep inside of her to artificially inseminate her and then leaving her to languish immobilized for the entirety of her four-month pregnancy. When she finally gives birth, she's moved to another crate where she'll also be so confined she can't even turn around and is separated from her babies. She'll push her body against the bars that confine her while her babies scream as their tails are cut off without painkiller. And after just a few weeks, those babies will be torn from her prematurely so she can be impregnated to start the cycle all over again. And again. And again.

The pork industry's sordid track record of systematically tormenting female pigs is matched by the egg industry's rampant cruelty toward hens. Nearly all female chickens used for egg production are locked in cages so small they can't even spread their wings. For more than a year, these hens suffer in squalid, cramped conditions.

And the dairy industry's abuse of female cows is also notorious. Like mother pigs used on breeding factories, dairy cows are essentially kept in a perpetual state of artificially-induced pregnancy, since of course only female mammals produce milk. Not only do we take the milk intended for their babies, but those babies are stolen from their mothers on the very first day of life, a traumatic experience for mother and baby alike.

Even in farmed animal experimentation, this trend of female exploitation seems to continue. A recent New York Times exposé of a federally-funded meat industry research facility revealed that in order to study libido in cattle, the experimenters locked a cow's head in a cage so she couldn't escape and then put six bulls in with her. The researchers allowed the bulls to rape the immobile cow for hours, until "her back legs were broken. Her body was just torn up." She died later that day from the assault.

The point isn't to suggest that male animals don't suffer in the meat, egg and dairy industries. They do -- terribly. The point is, though, that often the most insidious abuses in the animal agribusiness world are reserved for female animals. It's almost as if the industry somehow feels even more comfortable inflicting horrific cruelty when the animal victims are female.

Erica Meier is executive director of Compassion Over Killing. You can follow her at http://twitter.com/ericameier.