Throughout history, hospitals have sprung up during times of crisis to treat the victims of disaster, violence, and neglect. Farm Sanctuary's new Melrose Small Animal Hospital is no different. At our sanctuary in Watkins Glen, New York, Farm Sanctuary has just completed construction of a unique hospital for animals born and bred to be our food, who have suffered severe injury and disability at the hands of the factory farming industry. If an ER for calves, pigs, chickens, turkeys and goats seems extreme to you, you may be more out of touch with your food than you think.

Animals exploited for meat, milk and eggs live short, miserable lives. They are systematically exposed to intense confinement, filth, crowded conditions and brutal abuses. Parts of their tails, toes, genitals, ears and beaks are cut off, without painkillers, to better mold them to the perversely unnatural and highly stressful environments of factory farms. It is common for farm animals in these environments to succumb to injury and disease, and every year hundreds of millions die before reaching the slaughterhouse. Factory farming subjects billions of animals to intolerable conditions and untimely deaths, while a majority of U.S. citizens unwittingly support this cruelty by consuming meat, milk and eggs. 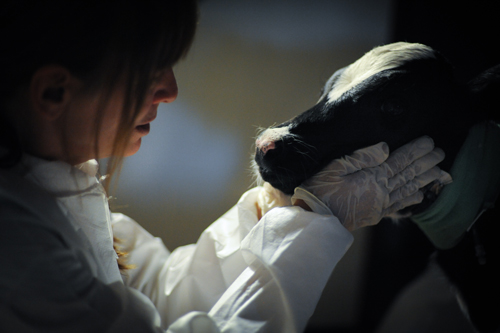 Jo-Anne McArthur/The Ghosts in Our Machine

Farm Sanctuary was founded in 1986 to expose and challenge this system and to aid its victims. We care for cows, pigs, chickens, turkeys, sheep and other animals who had been discarded in trash cans, in stockyard alley ways, on "dead piles" or who were found on the side of the road after falling out of transportation vehicles. In some cases, farm workers have intervened on the animals' behalf and brought refugees of this brutal industry to the safe pastures of Farm Sanctuary.

Our new animal hospital will provide life-saving care to animals in distress, healing them so that, for the first time in their lives, they can experience peace and freedom. These individuals will serve as ambassadors for less fortunate members of their species who suffer hidden from public view on factory farms.

This hospital will bring new efficacy to work we have conducted since long before its construction. One beneficiary of that work is Sonny, who we found when he was less than a day old, lying motionless in a filthy stockyard pen. As a male calf born into the dairy industry, he was considered a "by-product" to be sold for cheap veal or beef -- if not simply discarded as trash. Sonny's umbilical cord had been torn off leaving an open wound; he was sick from infection, dehydrated, and exhausted. Without intervention, he would have only known pain and suffering in this world. In this case, our caregivers were able to rush Sonny to Cornell University's Hospital for Animals, where he received a blood transfusion and antibiotics. Sonny recovered from this trauma with close follow-up attention, and he now flourishes at our New York Shelter in Watkins Glen. Today, other sick and injured animals, like Sonny, who are lucky enough to find their way out of the factory farming system will receive round-the-clock care at our new hospital dedicated to their special needs.

Please see below for a gallery of BEFORE and AFTER images of animals who were given a second chance at life after being rescued and rehabilitated by Farm Sanctuary.

Farm Sanctuary Before and After