Occupying 90,000 square feet of a formerly abandoned suburban Chicago warehouse, FarmedHere is not only the first indoor vertical farm of its kind in the nation -- it's also the largest.

Celebrating its grand opening in Bedford Park, Ill., on Friday, FarmedHere utilizes a soil-free, aquaponic process to grow organic greens that are both tastier and more sustainable than traditional farming.

Here's how it works: Plants are grown in beds stacked as much as six high by using a mineral-rich water solution which is derived from tanks of hormone-free tilapia offering up nutrients to the plants in a controlled environment that ensures optimal growing.

(Peek inside the Chicago-area facility below.)

The facility hopes to produce an anticipated 1 million pounds of chemical-, herbicide- and pesticide-free leafy greens -- including basil, arugula, mints and other greens -- to the Chicago area once it hits full production. In addition, the facility says by 2014 it will be providing about 200 jobs to the community, many of them via a partnership with Windy City Harvest, a Chicago Botanic Garden-led urban agriculture training program targeted to underserved local youths.

At the helm of FarmedHere is CEO Jolanta Hardej, a former interior designer and mortgage broker who saw the potential in vertical farming for the Chicago area after the 2008 crash of the real estate market.

"Growing indoors in [a] controlled environment, perfect humidity, perfect temperature. We hire local, we grow local, and we sell local," Hardej explained in a recent interview with WGN.

The Bedford Park facility is FarmedHere's third farm, joining a 10,000-square-foot facility in downstate Flanagan and a 4,000-square-foot one in Englewood. Whole Foods, which sells the company's greens in its Chicago stores, helped finance the new facility with a $100,000 loan, Crain's previously reported.

FarmedHere's products are also sold in Chicago-area Mariano's locations as well as Green Grocery, and Hardej told Crain's last year she was also in talks with Meijer and Trader Joe's.

As Chicagoist points out, FarmedHere isn't alone on the local aquaponics startup scene in Chicago -- as several businesses operate out of the innovative The Plant farm and agriculture incubator -- but none to date match the scale of FarmedHere. 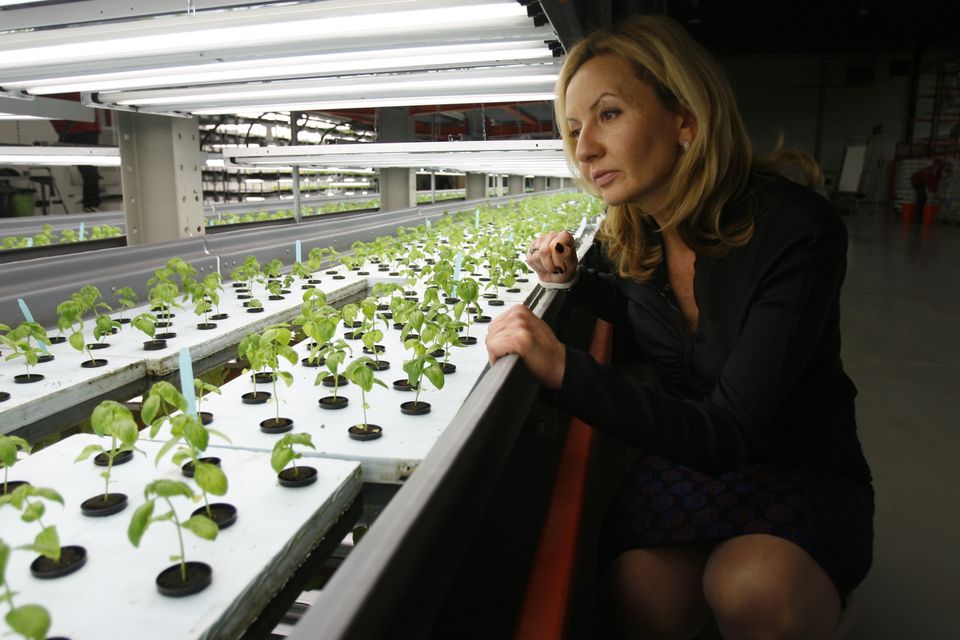 1 / 15
Jolanta Hardej, CEO of FarmedHere LLC, examines a young basil crop at the indoor vertical farm in Bedford Park, Ill., on Wednesday, March 13, 2013. The farm, in an old warehouse, has crops that include basil, arugula and microgreens, sold at grocery stores in Chicago and its suburbs. Hardej says FarmedHere will expand growing space to a massive 150,000 square feet by the end of next year. It is currently has about 20 percent of that growing space now. (AP Photo/Martha Irvine)
AP