A farmer with a stomachache ended up having hundreds of coins, nails and several other objects removed from his belly.

Rajpal Singh 34, from Bathinda in India's western state of Punjab, went to the hospital last Wednesday, according to Caters photo agency. An endoscopy revealed hundreds of objects inside Singh's stomach.

In two operations, one on Wednesday and one on Saturday, doctors at R Gagan Gastrocare removed 140 coins, 150 nails and a handful of nuts, bolts and batteries. 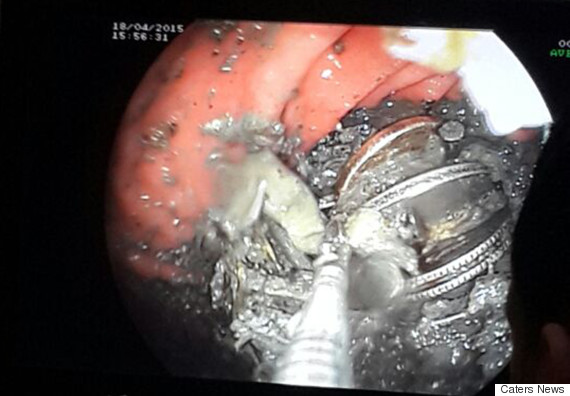 "I used to gulp down coins and metals with fruit juice or milk," Singh told Caters. "Due to family problems I had slipped into depression and got hooked onto this weird habit."

Singh added that his habit could have killed him. “Doctors have told me those sharp needles would have punctured my intestine and I would have eventually died," he said. "I feel much more relaxed now. I am never going to do this again.”

Dr. Gandeep Goyal led a team of five doctors, who operated on Rajpal for more than nine hours. "The patient came to us with severe stomach pain," Goyal said. "When we did the endoscopy, we were shocked to see so many foreign bodies, including coins and needles in his stomach."

Goyal said some items remained in Rajpal's stomach after the first surgery. Doctors then waited three days for Goyal's body to recover before going in for the rest of the objects.