Wednesday night I saw a fine documentary called FRESH in which farmers using brilliantly conceived, sustainable growing methods were celebrated for the heroes they are.

The film, directed with great sensitivity by Anna Joanes, portrays the palpable joy of farmers like Joel Salatin in rural Virginia and Will Allen in urban Milwaukee who are finding ways to farm that create high-quality food profitably and chemical free. It was thrilling to have Salatin, Allen, chef Dan Barber of Blue Hill, and nutritionist/organic gardener/author Joan Gussow emerge after the screening to take questions.

The film and panelists received a standing ovation. It was a thrilling moment, full of hope that we are on the cusp of great and long overdue change in American agriculture. (For more details on the growing grassroots movement towards sustainable farming, a great site to visit is eatwellguide. I subscribe to their informative blog The Green Fork on an RSS feed.)

Before viewing the happy pigs, cows, chickens, and sprightly salad greens of these two featured farmers, I had to close my eyes during those moments when the devastating conditions of factory farming were screened. A few times in the film, we witness a vacant look in the eyes of an average-Joe farming couple caught up in a nasty procedure that "grows" chickens inhumanely. During the interview, two beloved poodles cuddle on their laps, a visual that brilliantly captures the irony and tragedy of an animal-raising system that splits human psyches asunder.

On my recent trip to Utah, I met a farmer hero like Salatin and Allen by a combination of chance and determination. Despite the magnificent scenery all around us, The Sweetie and I were beginning to languish about the fourth day into the trip. Looking forward to eating well prepared, real food means a great deal to both of us, and we were having a rough time finding anything healthy to put on our plates. There were overweight people and fast-food restaurants all around us, and we'd run out of the wholegrain bread I'd brought along for breakfast...

So when we were served a complimentary appetizer of fresh, lightly pickled vegetables at a delightful restaurant called Cafe Diablo in the tiny town of Torrey, we immediately asked their source and were told about Randy Ramsley's Mesa Farm Market Bakery and Cafe in nearby Caineville. In addition to wanting to see those veggies at their source, it so happened that Randys' farm was right on scenic route 24.

So the next day, we headed for his place and traveled for what seemed like hours through variably gorgeous and desolate landscapes before suddenly out of nowhere there appeared this shack on the right side of the road: 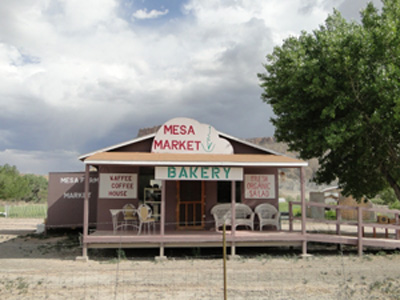 It was about 4 p.m. and the place looked very closed, but I spotted a silver-haired man at the back and decided to knock on the front door. Someone opened the door and there was Randy, who turned out to be the farmer and just about everything else at the moment.

Once inside, the place looked pretty barren of veggies and sandwiches, so we asked for some iced coffee. Randy said he thought that could be done and proceeded to grind some fair-trade beans and make us a fresh batch, which proved to be the best coffee we had on the trip.

Once revived, I spotted some freshly baked loaves and was thrilled to learn that some were made of wholegrain flour. Good, that would be breakfast and maybe part of the lunch for the next few days. Randy had already delivered his organic salad greens and other vegetables to Cafe Diablo and another terrific restaurant called Hell's Backbone Grill in Boulder (yes, there is a Boulder, Utah), so we couldn't buy any of those, but we had a chance to chat as we sipped the fresh brew.

"How did you end up farming on this desolate stretch of road?" I asked.

Randy was hiking through the Caineville area, spotted the land, and knew it was going to be his job to farm there. "We are farming in the heart of the Caineville Badlands," he explained to us (and in further detail on his beautiful web site). "These badlands are some of the 'baddest' badlands in North America. Yet we grow what we believe to be some of the most heavenly tasting organic fruits and vegetables on the planet."

Through hard work, creative genius, and a belief in his mission to provide high quality food to those who can't otherwise get it, Randy and his co-workers have developed a method of farming sustainably in the Utah desert at the same time as he improves the soil in these badlands. He uses a type of drip irrigation developed in Israel and maintains a herd of goats to do the weeding. The goats digest the weeds, and drop their fertilizing pellets onto the soil. Little by little he's developing a small artisanal cheese business based on the goat milk.

On his 50 acres, he also has an acre of fruit trees. In the middle of it is a chicken coop. As explained by Randy, the 50 or so chickens eat garden waste, bugs, weeds, and fallen fruit. They provide eggs as well as nitrogen-rich fertilizer. When he makes deliveries of bread and vegetables to the restaurants he serves, he collects their waste vegetable oil and turns it into biodiesel, then uses the biofuel to run the pumps and tractor.

It's a circular system like the ones described by Salatin and Allen. Nothing is wasted, the soil becomes richer in nutrients each year, and people get to eat the healthiest food they've ever tasted.

Meeting Randy was a highlight of our trip to Utah. We came away knowing we'd met someone who was doing the work that he loved and was meant to do, and we were the richer for the experience. As for me, it's been a long time since I've had any living heroes and I feel very lucky to have met three of them in the space of one week.