Two items crossed my desk recently that were so fundamentally opposite in their visions of the future that it was enough to give a reader whiplash. The first was the 2012 book Abundance, the optimistic paen to entrepreneurs, inventors and Silicon Valley gazillionaires written by X-Prize founder Peter Diamandis and science journalist Steven Kotler. The authors claim that the exponential growth of technology will solve all the world's ills, and, "within a generation ... provide goods and services, once reserved for the wealthy few, to any and all who need them." Poo-burning toilets, refrigerator-sized water purifiers, portable nuclear power plants, algae biofuels and skyscraper greenhouses capable of feeding the world's 800 million hungry, among many other gadgets, they contend, are just around the corner and, within 25 years, will create a techno-utopian world. The other item was more sobering -- an article in London's Independent newspaper headlined, "Society will collapse by 2040 due to catastrophic food shortages, says study." The study, based on a model created at Anglia Ruskin University's Global Sustainability Institute, forecasts that if global emissions continue unabated, plausible climate trends will lead to catastrophic crop failures and food riots around the globe. "In this scenario, global society essentially collapses as food production falls permanently short of consumption," Aled Jones, director of the Institute, told reporters. The study echoes a similar, peer-reviewed report from Lloyds of London, which found the probability of a major food crisis "significantly higher" than the insurance industry's benchmark return period of 1:200 years. The takeaway seems pretty straightforward. If the Tom Swifts of today are going to save our skins, they'd best get on with it.

"The ultimate irony is that agriculture pumps out a third of the world's greenhouse gas emissions."

This is not a new debate. Enlightenment-era utopians like the Marquis de Condorcet and English anarchist William Godwin argued in the 1790s that advances in reason, science and technology would ultimately create a harmonious human society. Fields would produce an increasing bounty, desires of the flesh would be replaced by exercises of the mind and humans would live longer and longer until they achieved God-like immortality. (Godwin's daughter, Mary Shelley, expressed a darker take on technology when she penned Frankenstein in 1818.)

But a statistic-loving Cambridge-educated preacher stopped the dreamers in their tracks. Unchecked population increases in a geometrical ratio, argued Rev. Robert Malthus (1798), while agricultural production increases in an arithmetical ratio. "A slight acquaintance with numbers will show the immensity of the first power in comparison of the second...The natural inequality of the two powers ...form the great difficulty that to me appears insurmountable in the way to the perfectibility of society. ...I see no way by which man can escape from the weight of this law which pervades all animated nature. No fancied equality, no agrarian regulations in their utmost extent, could remove the pressure of it even for a single century." And yet, escape it we did. We escaped it time and time again, though not without enormous suffering (famine killed an estimated 100 million people in the 19th century) and world-altering environmental impacts, including what Harvard biologist E.O. Wilson calls "the sixth great spasm" of species extinction in the history of the planet. We did this first through the British agricultural revolution of the mid-19th century that gradually spread around the world, and then through the Industrial Revolution that soaked up all those displaced farm workers and put them to work on the factory floors.

The great British chemist Sir William Crookes raised the specter of famine again in the early 1900s, warning that without a new source of nitrogen fertilizer, the world would run out of wheat in 30 years. Thirteen years later, German scientists Fritz Haber and Carl Bosch commercialized a method to pull unlimited amounts of nitrogen from the air, leading to grain surpluses as well as the first chemical weapons. Scientists and economists again raised the warning around 1970, when exponential population growth resulting from vaccines, improved sanitation and falling death rates left a quarter of the world hungry.

Their concerns were swept away in half a decade by high yielding varieties of wheat and rice developed by
Norman Borlaug
in Mexico and the
International Rice Research Institute
in the Philippines (though Borlaug had been working on them for the previous 20 years). The increase in food availability and reduction in poverty was so dramatic it was dubbed
"the green revolution
." Borlaug was awarded the Nobel Peace Prize for his efforts -- the only agricultural scientist to win the award. Yet the chemical-dependent monocultures he helped create left ecological destruction and chemical pollution in their wake.

"In order to feed the estimated 9.6 billion people expected to be living on Earth by 2050, experts predict we'll need to increase food supplies by 70 to 110 percent."

Today, respected organizations like Lloyds, the Food and Agriculture Organization of the U.N. and the World Bank among many others, are once again raising the warning flag about future food security, and this time the yawning gap between supply and demand of our staple food grains that produce the bulk of the world's calories is even greater. The spectacular yield gains of the green revolution have flattened in the great grain baskets of the world, while population growth, income growth (which leads to more meat and dairy consumption, multipliers for grain consumption) and food-based biofuels are driving demand even higher. In order to feed the estimated 9.6 billion people expected to be living on Earth by 2050, experts predict we'll need to increase food supplies by 70 to 110 percent, or as World Food Prize recipient Gebisa Ejeta said in 2010, "We'll have to learn to produce as much food in the next four decades as we have since the beginning of civilization." That alone seems an impossible task. But a few additional hurdles lie in our way. The fundamental requirements for growing food grains haven't changed much in the past 10,000 years: suitable soil, adequate freshwater and a climate that food crops can endure. The first two are finite resources already showing their natural limits as we pave over good farmland and steadily drain our aquifers. By some estimates, the amount of arable farmland lost to development and degradation amounts to about 30 million hectares each year -- roughly the size of the Philippines -- while the World Bank estimates that 15 to 35 percent of global water withdrawals are unsustainable. Yet water demand is projected to increase 55 percent by mid-century -- when nearly half the globe will be living in water-stressed regions of the globe. A benign climate also seems a thing of the past. The heat wave that hit Europe in 2003 killed more than 70,000 people and withered grain and fruit yields by 20 to 36 percent. Russia, one of the largest exporters of wheat, lost a third of its crop in 2010 to the hottest summer since 1500. Back to back droughts in the United States during 2012 and 2013 were the worst since the 1950s, affecting more than half the nation's farmland and costing more than $30 billion.

And here's the scariest part. A broad review of climate studies by England's Royal Society concluded that a 4 degree Celsius increase in global average surface temperature could make half of the world's current farmland less suited or even unsuitable for agriculture by century's end, when global population will likely reach nearly 11 billion. Our current emissions are on track to increase temperatures by 3.6 to 5.3 degrees Celsius by then. The ultimate irony is that agriculture, as currently practiced, is one of the greatest offenders, pumping out a third of the world's greenhouse gas emissions. We are literally farming ourselves out of food.

"The roadblocks, as they have been since Malthus's day, are political, cultural and economic."

We actually already have tried-and-true solutions to ease the impending food crisis, some of which find their way into Abundance. The roadblocks, as they have been since Malthus's day, are political, cultural and economic. The enormous yield gaps between the developed and developing worlds (as well as former Soviet states) could be closed with our current stock of fertilizers and seeds, were it not for political opposition, rampant corruption and the cost of building roads and infrastructure. We could vastly expand aquaculture around the world, the most efficient way to produce animal protein, if coastal residents would allow it; this would enable us to outlaw the use of food-based biofuels, freeing up millions of hectares of arable land.

New, cheap drip irrigation systems, as well as agronomic systems like SRI rice, can save half the water lost in traditional irrigation. Perhaps most importantly, we could help reduce future population growth -- and food demand -- by educating girls in developing countries and making family planning services and contraceptives free and available to all who want them. Simply giving African women equal access to land, technology and capital as men, according to USAID, would increase African production as much as 30 percent. And of course, we could all eat far less meat, particularly grain- and water- intensive, methane-emitting beef.

Yet all of these solutions pale in the face of a world that is warmer by 4 degrees Celsius.

In Abundance, Diamandis and Kotler argue that instead of learning how to share a dwindling pie of global resources, we simply need to make more pies. I sincerely hope that history will once again prove them right. But until the great gizmos they promote actually start to make a dent in global food, water and energy security, it seems wise for us, and by extension our political leaders, to also go on a diet -- and a massive carbon diet at that.

PHOTO GALLERY
Grandparents.com: 10 Food Scraps You Should Always Save
Download
Calling all HuffPost superfans!
Sign up for membership to become a founding member and help shape HuffPost's next chapter
Join HuffPost

We Are Literally Farming Ourselves Out of Food
Grandparents.com: 10 Food Scraps You Should Always Save 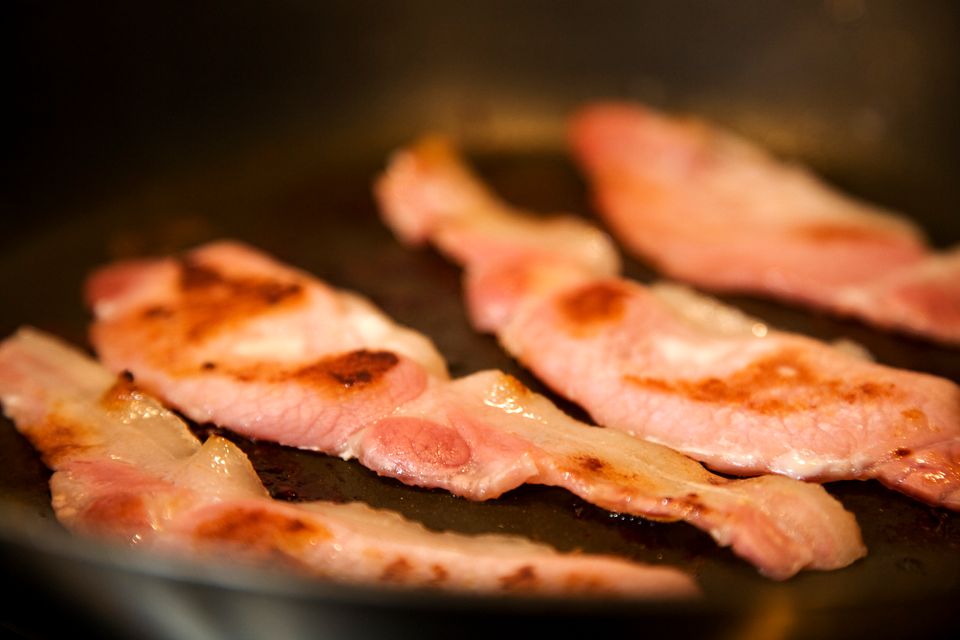 1 / 10
Meat fat, scraps, and bones
You probably knew that you can save chicken carcasses and beef bones to make soup stock. But those other spare parts can be useful, as well. <br><br> "The next time you roast or sauté meat, save the leftover juices and oil," says Jess Goldman Fuong, proprietor of SodiumGirl.com and author of Waste Not column at TheKitchn.com. "Depending on what else you are cooking, add the savory leftovers to a pot of beans, cooked grains, or even sautéed greens." Bacon grease is especially good for this (cooled first before storage, of course), lending flavor to everything from eggs to popcorn. On a similar note, duck fat is said to be especially good on roasted potatoes. <br><br> Don’t dispose of leftover bits of meat, either. TheKitchn.com commenter ThosePotatoes saves, "pieces of roasts, steaks, chops, etc (nothing is too small) in a freezer bag until full," then "grind(s) or chop(s) them up for chili, soups, casseroles, tacos, etc." She finds the bits add flavor and texture to many dishes.
Getty Images/Flickr RF