While Japan may be in the hot seat with the international community for it's annual Flipper killing-spree, recently exposed by this year's Academy Award winning film The Cove, it is certainly not the only nation guilty of gruesome cetacean massacre. Last week, The Sea Shepherd Conservation Society captured shocking and highly disturbing images of 236 pilot whales brutally slaughtered in the town of Klaksvik in the Danish Faroe Islands. Ah yes, something is indeed very rotten in Denmark. 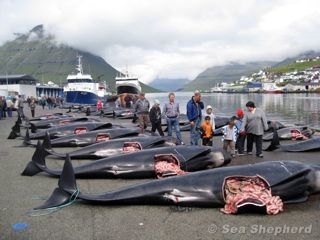 Living incognito and posing as a Swedish film student under the alias Frederik Nilsson, Sea Shepherd's Peter Hammarstedt was alerted to the annual "grind," as referred to by the Faroese, by a broadcast over the local radio station. Without hesitation, the veteran activist quickly arrived on the scene to document the grisly bloodbath that is considered a cultural tradition and rite of passage in the tiny island group situated approximately halfway between Britain and Iceland.

Hammarstedt, a Swedish native, offered his first hand knowledge on the matter earlier this week and recounted the harrowing experience that left him fleeing the seaside village once his true identity was discovered and he began to receive threats and was followed by local fisherman who recognized him for his prominent role on the hit television series, Whale Wars.

"An entire pod that once swam freely through the North Atlantic has been exterminated in a single blood bath," stated Hammarstedt on the Sea Shepherd website. "Unborn babies still attached to their mothers by the umbilical chord had been cut out of their mother's dead bodies and left to rot on the docks," added Hammarstedt, who photographed several dead pregnant females, infants and fetuses. "Pilot whale groups are strongly matriarchal; I can't imagine the fear and panic that these mothers must have felt as their families were wiped out in front of them." 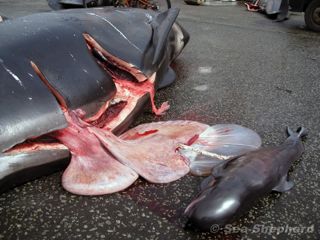 While, there is no such thing as a pretty picture when it comes to the topic of whaling, this particular "method" is especially gruesome as is harshly evidenced by the grueling photos taken by Hammarstedt in order to expose the sheer cruelty behind the killings. This horrendous tradition, if not blatant act of 21st century barbarism, involves stranding and capturing pods of pilot whales and violently cutting out their spinal chords with long knives while simultaneously bludgeoning them to death with stones, spears, hatchets, clubs and axes. All the while young village children frolic in the shallow bloody waters and participate in the butchery of the visibly and audibly terrified whales in what is considered by locals as a community sporting event. According to Hammarstedt, "Among the male population, it is a coming of age ritual as a boy is allowed to partake in the actual killing when he becomes a teenager." While the grim images speak for themselves, Hammarstedt described the massacre of one of the grind's innocent victims in detail:

"One whale had five to six brutal chops to her head. The islanders basically used her as a chopping board. Her death would have been slow and extremely painful. Some whales are hacked repeatedly for up to four minutes before they finally die." 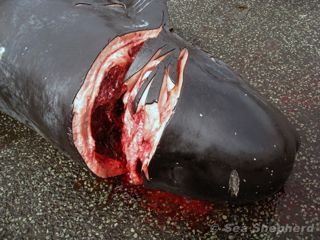 While there is some local criticism of the grind amongst villagers, most are reluctant to voice their opposition as cultural tradition runs deep in the small tight nit community of Norse descendants. Furthermore, townspeople are expected to participate in the bloody "festivities" that have taken place since the 1500s against the pristine fairy tale like back drop. According to Hammarstedt:

After the Klaksvik grind, several eyewitnesses criticized the grind to the media but all chose to remain anonymous. The Klaksvik grind was particularly cruel because the number of whales taken far exceed the carrying capacity of the shore. Since the whole community partakes in the grind, critical voices are rare. 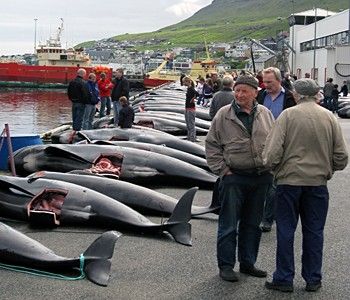 Although listed as "strictly protected" under the Convention on the Conservation of European Wildlife and Natural Habitats, also known as The Berne Convention, pilot whales in the Faroes Islands are anything but that. According to Sea Shepherd founder and lifelong champion of all whales and dolphins, Paul Watson, who referred to the Faroes as "The Ferocious Isles" in a recent email correspondence:

"The killing of the whales in the Faroe Islands is a violation of the European Union, specifically the Berne Convention but the Faroes as a Danish Protectorate are not a member of the EU although they directly benefit through Denmark from the EU. Denmark should be held accountable but apparently they are not.

While there is a little bit of grey area, added Hammarstedt, the Convention states clearly that,

"all signatories are responsible for co-ordinating their efforts for the protection of migratory species specified in Appendices II and III whose range extends into their territories. Long-finned pilot whales are classified under Appendix II and the Faroe Islands are a territory of Denmark. The Faroes have so-called "home rule", but Denmark is responsible for Faroese foreign policy."

Furthermore, The international Whaling Commission, the only supposed regulatory governing body of worldwide whaling practices, does not recognize small cetaceans such as the pilot whale, which contrary to it's name is actually a member of the dolphin family. Just like it's cousin in Taiji, these sentient and intelligent marine mammals literally have zero legal representation in the international conservation arena, leaving it largely up to direct action environmental organizations such as Sea Shepherd to take it upon themselves and risk personal safety by bravely exposing these issues. "I have sent expeditions there to oppose the slaughter in 1983, 1985, 1986 and 2000. In 1986 we worked with the BBC to make the documentary film Black Harvest," added Watson.

The Faroes, whose fisheries products account for more than 95% of total exports, have historically relied upon the fishing industry as a primary food source, however current scientific research indicates that the levels of mercury found in cetaceans such as the pilot whale are toxic and dangerous for human consumption. However, "The Faroe Islands now have one of the highest standards of living in Europe and the grind is no longer necessary for subsistence," explained Hammarstedt. Furthermore, he added:

"Since a health advisory was put out in 2008 by the Faroese chief medical officer Paul Weihe, less pilot whale meat is consumed because of the high contents of heavy metal pollutants. So the grind continues to a large part because of cultural tradition." 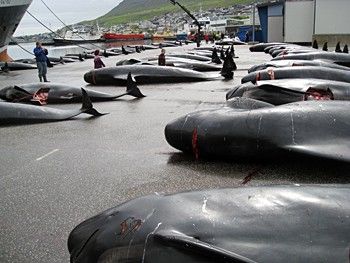 When asked what people could do to become actively involved in bringing an end to the senseless thrill kills, Hammarstedt suggested hitting the Faroese in their wallets, a tactic not at all unfamiliar to Captain Paul Watson and Sea Shepherd who are well known for their successful efforts to bankrupt rogue maritime industries including the collapsing Canadian seal hunt and illegal Japanese commercial whaling. Noted Hammarstedt:

Forty thousand people visit the Faroes as tourists every year. There is huge potential for the tourism industry to grow. Iceland gets over half a million tourists a year. It's a shame for Faroese business that when you do a Google search for the Faroe Islands, images of dolphin slaughter are the first to come up. I would contact the Faroes Tourism Board and state that you won't travel there until the grind is stopped.

For more information on the grind, visit: www.seashepherd.org or contact the Tourism Board directly: