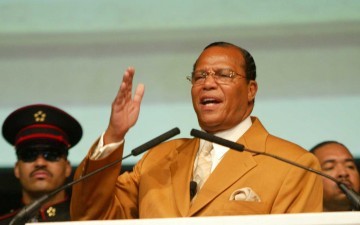 When I started touring, thousands of people came out. I'm talking about men. In the major arenas, in the major cities, they came out by the tens of thousands. I told them about our desire to go to Washington. I told them there would be nobody paying their way. I told them, 'You are not to bring any weapons to Washington. We will demonstrate the power of our unity.' That would produce a beautiful brotherhood on that day.

They heard me and believed me. You saw it in 1995: the greatest demonstration in the history of America, of Black love, Black men coming together. We would go into Washington not to demand anything from the government except to let the government and the world see a sea of Black men responding intelligently to a call and showing that we were not the savages that the movies portrayed us [as]. That we were highly civilized and could make a difference, not only in America but also for our world of Black people.

Read Min. Louis Farrakhan's announcement of this year's "Justice or Else!" event
The theme was atonement; we had to atone to God for our failure as men to be the providers, the protectors, the defenders of our women and children, and that was one of the principal cornerstones of the march. Atonement, then reconciliation, that we were asked to reconcile our differences with each other, in our churches, in our organizations, in our families.

Even though some of our sisters felt [a men-only march] was a sexist move, if you go to back to the March on Washington, there was only one woman on the program. That woman was Mahalia Jackson, who sang. But if you go to our march, in 1995, the mother of that march was Dorothy Height. Mayor Marion Barry's wife, Sister Cora Masters Barry [provided support]. So many women came to back us in our effort. On the stage that day was the late Maya Angelou [and] the late Betty Shabazz and two of her daughters. Mother Rosa Parks was present. Women were represented on the program as well as female children and male children.

Yes, of course, [Black men] have challenges. Whether we are confronted with that difficulty or not, we have a responsibility to our women and children. A real man accepts the challenge and defeats it. That's why we were right to atone to God, because as the Scripture says, 'If God be for you, who can be against you and win?' If we were not connected to God, that was where the challenges broke us rather than us breaking and defeating the challenge.

Right now, do we have some atoning to do with the blood that is being let in our community, Black-on-Black crime, Black-on-Black rape of our women and disrespect of us? Do we have something to atone for when we get on television and records and radio, calling our women out of their names, facilitating gun violence and drugs, and glorifying it? Of course we do.

We shouldn't let our people off the hook who said, 'Well, I didn't agree with [the call for] atonement.' Do you understand why it is necessary for us to rebuild our families, rebuild our communities and atone for the way we treat one another? Atonement is still a principle that is absolutely and vitally necessary.

I accept that there were things that could have been done better. [For example,] Jesse [Jackson] came on at the last minute. If Jesse [had been] there from the beginning, he would have shown me what was going on up in Congress that I was not aware of. At the time that we were having the Million Man March, Congress was debating the merits of crack cocaine and powder cocaine in sentencing. If I had known that, we could have been stronger in [pushing against] Congress, and [it] passed that bill [that led to] heavy penalties for crack cocaine, which is what Black youth were using, and [lower jail sentences] for powdered cocaine, which Whites and middle-class Blacks may have been using.

Yes, there are many things that could have been done better, but has anyone ever done anything like what we did? I did the best that I could with the knowledge that I have and the vision that I had.

Nobody can deny the vision that led to that [march] is in operation today. We have proof that the U.S. government brought the drugs in, the guns in, and facilitated Black-on-Black crime and murder. The government dried up the jobs in the cities, closed down factories and sent them overseas to cheap labor markets. City and state governments closed down the schools that teach young people trades, so Black youth don't have a trade that they can use to make a decent living.

We were herded into a drug culture, a gang culture, a criminal culture. What is our condition today? Has it really changed from 1995? The facts then are the facts now. We were more united after the Million Man March, and then the intensity of the opposition went to work.

That's why Blacks are in the streets saying, 'Black lives matter.' It's the right response. This is the generation that's going to make the biggest difference, because they're fearless. When you look at Ferguson on the news now, look at who's challenging the police: it is young Black men and women, boys and girls standing up for the dignity of their own humanity. That's why we [have called the 20th anniversary march] 'Justice or Else!' because now, this has to lead to something positive. Because if anger is not directed properly, it will lead to slaughter. Many of us are willing to give our lives now to make the change that we seek and to be the change that we'd look for somebody else to be.

As an old man who is going down into the valley of death, for me to look back over my shoulder and see these intelligent young people defending their positions not just with anger,but with intelligence, I admire them. If I live a little longer, all I want to do is give guidance to them [so] that they know the time and know what must be done in this time period.

We are moving toward Washington and moving toward [the anniversary march on] 10-10-15 but we are not interested, really, in a march. We're interested in a movement that can become the basis of national development of our people.

It's a great mistake to suggest that only Black men should lead. It's women who are leading the movement today. Why is that? What has happened to the Black male since 1995? We really need to look at ourselves, because there's medicine for our condition and what you see today is our women leading, our women standing, our women strong--our men, not as strong.

[Black women] are very powerful. This is your time to shine, and we are coming up to shine right along with you. It's not men in front, women behind; it's men and women walking together, working together to make a better world. When the woman is more qualified, she goes in the front. It's not her gender that's in front, it is her mind, her wisdom, her intelligence that's leading. If we can get past that, we've got a new world coming.

Ultimately, the Million Man March showed that for one day, we could come together and love each other and be brothers to each other. In the city of Washington, there was no crime on that day. The legacy that what we established on that day needs to be analyzed, because if we can do it for a day, we can do it for a week, a month, a year, and that is the beginning of a brand-new reality of a Black life. What we did for that one day should be for every day of our life."