For those who are not clear on what fascism actually is, let me highlight Adam Gopnik's description:

As I have written before, to call him a fascist of some variety is simply to use a historical label that fits. The arguments about whether he meets every point in some static fascism matrix show a misunderstanding of what that ideology involves. It is the essence of fascism to have no single fixed form--an attenuated form of nationalism in its basic nature, it naturally takes on the colors and practices of each nation it infects. In Italy, it is bombastic and neoclassical in form; in Spain, Catholic and religious; in Germany, violent and romantic. It took forms still crazier and more feverishly sinister, if one can imagine, in Romania, whereas under Oswald Mosley, in England, its manner was predictably paternalistic and aristocratic. It is no surprise that the American face of fascism would take on the forms of celebrity television and the casino greeter's come-on, since that is as much our symbolic scene as nostalgic re-creations of Roman splendors once were Italy's.

What all forms of fascism have in common is the glorification of the nation, and the exaggeration of its humiliations, with violence promised to its enemies, at home and abroad; the worship of power wherever it appears and whoever holds it; contempt for the rule of law and for reason; unashamed employment of repeated lies as a rhetorical strategy; and a promise of vengeance for those who feel themselves disempowered by history. It promises to turn back time and take no prisoners. That it can appeal to those who do not understand its consequences is doubtless true. But the first job of those who do understand is to state what those consequences invariably are. Those who think that the underlying institutions of American government are immunized against it fail to understand history. In every historical situation where a leader of Trump's kind comes to power, normal safeguards collapse. Ours are older and therefore stronger? Watching the rapid collapse of the Republican Party is not an encouraging rehearsal. Donald Trump has a chance to seize power.

Hillary Clinton is an ordinary liberal politician. She has her faults, easily described, often documented--though, for the most part, the worst accusations against her have turned out to be fiction. No reasonable person, no matter how opposed to her politics, can believe for a second that Clinton's accession to power would be a threat to the Constitution or the continuation of American democracy. No reasonable person can believe that Trump's accession to power would not be. And, this time, would there be a second America, a new Chicago, waiting to receive the once-cosmopolitan citizens ejected by the triumph of this warped will?

Trump is a fascist. Win or lose, he has, with the connivance of the American corporate media which has provided him with billions of earned (free) media, permanently changed the nature of American politics. We are now in the era of an anti-politics, the likes of which this country has never seen. Coupled with the hyperpolarization which has been growing since the institution of the Nixonian "Southern Strategy" in 1968, we are looking into the pit of another civil war.

I am an optimist; it's been the only way I could survive my own trauma over the decades of my life. I do, however, see a way out, and it begins with a Clinton victory in November to buy us time. But I do not believe that would be the end of it. The rump of what remains of the Republican party will most likely not unite with Democrats to save the Republic, but continue on their path of obstructionism. To end that, to shut down the worst of the polarization that continues to grow, and give most Americans the opportunity to live as a free people, requires what has heretofore been considered a taboo. The last taboo, actually. We must divide the country, and undo Andrew Johnson's overly hasty and corrupt reunification of the country in the late 1860s.

Lincoln went to war in 1860 not to end slavery, but to preserve the Union. That should not have been his cause then, nor should it be ours now. America has always been two countries, conceived in sin, and ending the effort at forced cohabitation would benefit us all. In a world where many will admit matters have improved with the breakup of Czechoslovakia, Yugoslavia, and the Soviet Union, and which is now coming to terms with at least a partial breakup of the EU and the possible fragmentation of the United Kingdom, it might just be time to seriously consider how much better off we'd all be with the Confederacy off on its own. We could have a confederation, with a single currency and Federal Reserve, perhaps. Share a military, like NATO.

But the people we on the Left call deplorables will have the opportunity for self-governance, and may come to a new understanding of the responsibilities of civil society while they celebrate their religious freedom to their heart's content And we on the Left, whom the Right has also thought of as deplorables, or "feminazis" or whatever locution of the day is concocted by Fox News, can go on our very gay way and the Right could still taunt us from behind their border wall along the 36th parallel. I can guarantee that the United States, with some 38 +/- states, will not declare war on the Confederacy to undermine their Christmas celebrations. 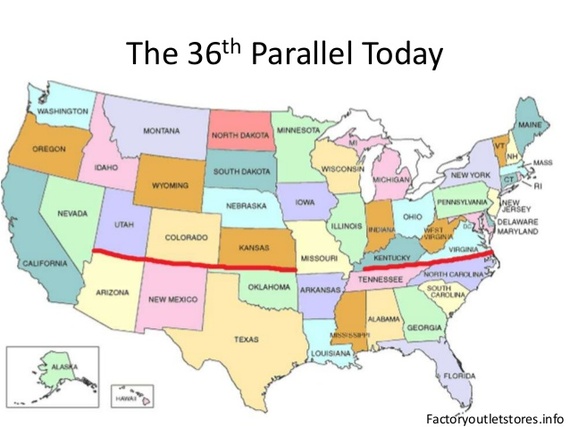 Let's give it a thought. A functioning two-state solution which will provide a settled life for most people is a better option than continued ideological stalemate and governmental paralysis, or a fascist takeover of the entirety of our constitutional republic.

In the meantime, don't be self-righteous and vote third party. Don't stay home. Vote for Hillary - and if you don't, America's Jewish grandparents will haunt you for the rest of your life.