Hypersexualized advertisements showing women's bodies (or disembodied parts) are all too commonplace -- but would we react to these ads differently if they objectified men the same way they do women?

(Some images are NSFW.)

The pair focused on images related to men who have had an active hand in objectifying female models. For example, the pair used Sisley and Tom Ford campaigns shot by fashion photographer Terry Richardson, who has for almost a decade been accused of sexual harassment and taking advantage of models. They also used American Apparel ads, pointing to the company's recent controversy with former CEO Dov Charney as another example of sexism and objectification in the industry. Charney is accused of numerous work-related "sexual transgressions," including making one former employee his "sex slave" shortly after her 18th birthday.

Wade spoke to The Huffington Post about their decision to focus on images linked to Charney and Richardson. She said in an email:

Charney and Richardson are really representative of a specific form of sexism and objectification in media today. Their collaborations, in particular for American Apparel, depict women in sexually vulnerable, pornographic positions where a lot of the model's facial expressions look like they've been drugged or they're drunk. These images are predatory. They depict women being taken advantage of and it's supposed to look "sexy" and sell sweatshirts? 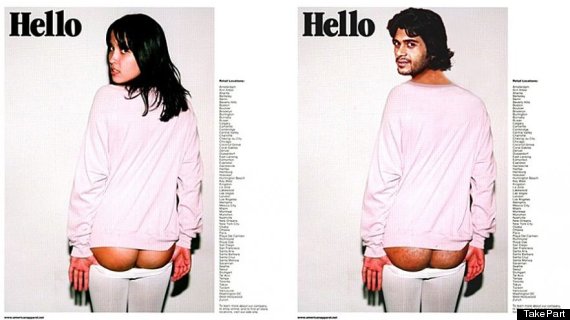 "I think photoshopping men's faces and bodies into these ads points a finger at how ridiculously demoralizing they really are," Wade told HuffPost. "My hope in pointing this finger is to spark and keep a conversation going—especially amongst women. I think as a whole we've just gotten used to seeing women depicted this way and the only way we can change it is if we stop staying silent and demand change."

The remade ads show us just how uncomfortable the originals are. Hopefully these images will inspire people to critically question the way advertisers are working -- and avoid brands that make a point of needlessly sexualizing women.