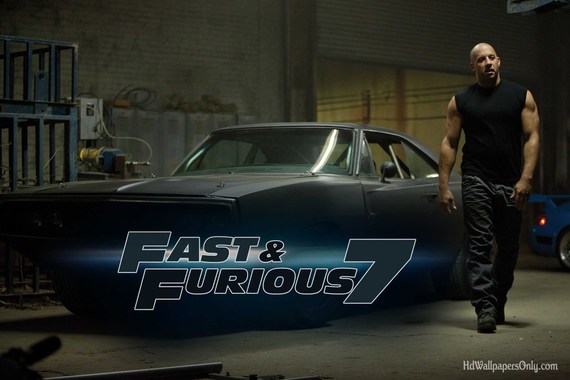 What the Fast and the Furious team can teach us about the struggle to stop climate change.

For me, spring brings an overwhelming desire to wear flip-flops and a deepening resentment of weather that just won't warm fast enough. If my office is any indicator, spring also brings relatives, lots of them, to gawk at cherry blossoms and clog our streets and sidewalks.

Recently, my parents visited the area. Of course, I took them to see the normal DC sites, but what my dad really wanted to see was the IMAX/3-D theater that I had been bragging about for months. As luck would have it, one of his favorite movie franchises -- Fast and Furious -- was playing.

In a time when the fossil fuel industry spent nearly a billion dollars, that's with a capital B, to influence the 2014 election, we are confronted on a daily basis with a Fast and Furious gang tasked with thwarting any practical and bi-partisan effort to solve, or even acknowledge, climate change.

To illustrate this point let's explore my favorite quote and scene from this latest installment of Dom and his Fast and Furious team:

Let's kick things off with my favorite quote as we encounter the gang attempting a high-speed rescue [are there any other types of rescue?] of a prisoner trapped in a heavily armored semi. Now, I wasn't in the room when Dom drew up the plans for this rescue, but it appears he settled on something like this: soup up a series of already awesome cars, wash and polish the cars to shiny perfection, drop said cars from an airplane and use some incredible driving to blow the back door off this moving semi.

Dom then gives his trademark grunt to the late Paul Walker's character, "You're up, Brian," kicking the next phase into action. All Brian had to do was jump onto the hood of his car, keep his balance while Ludacris "nudged" this car at an incredibly high speed to bring Brian closer to the semi, jump into the back of the moving semi, disarm about six [I just lost count] trained militia with his bare hands and rescue the prisoner who is locked in a cage onboard. Simple, yet foolproof!

It brought to mind days on my job when I feel like the climate movement has a similar plan. Hey, climate movement, "You're up!" All you have to do is stop what could be the biggest threat mankind has ever faced, confront one of the most profitable and politically influential industries in the world, and compete against an insatiable appetite for unsustainable consumption. And this has to be accomplished all while being grossly underfunded. Again, simple, yet foolproof!

Brian pulled off phase two with the help of Hollywood and a brief suspension of reality. We don't have that luxury. If the world is to avert the worst impacts of climate change, then we need practical solutions from the diverse talents and interests of a Fast and Furious team that is on our side. There needs to be political and regulatory actions, like the first-ever limits on the biggest source of carbon pollution [aka the Clean Power Plan] along with businesses like Apple [hopefully] succeeding in achieving its "We don't want to debate climate change. We want to stop it," headlines.

Dom's diverse team didn't come together overnight. It took time and many intense situations [not to mention a love for really cool cars] to build trust and respect. If we fail to do the same, Hollywood may be the only way to create a happy ending for our future.

The Fast and Furious team comes from a diverse background with their own interests and talents. Why can't ours?

I am still choking on the popcorn in disbelief of Brian executing the rescue plan to perfection when my favorite scene happens. Dom gets cornered by the bad guys on the slopes of an incredibly steep cliff. They close in, the situation grows worse. This time it would appear that our hero is officially trapped. Now any mortal man, or woman, would just surrender, but Vin Diesel passed into the ranks of immortality five movies ago. The sneer in his lip goes up as the lightbulb in his head goes off. The entire theater knows he has a plan, and we all dig deeper into our tub of popcorn as we wait to see what it is. We wait for it. We wait for it. We... Okay, I think you get the point; we are waiting for a long time. Then, he drives off the cliff. That's right, he just drives off the cliff and hopes he survives. That was his plan.

In the world of climate change advocacy, or in this case climate denial, we keep finding new and inventive ways to essentially say 97.1 percent of all scientists agree that climate change is caused by human activity. More organizations join our call for action every day like the upcoming encyclical expected from Pope Francis and the Catholic Church. Real problems created by a warming planet continue to escalate, like the one that forced California to issue its first-ever mandatory water rationing last month. This mounting evidence that climate change is worsening would paint most people into an inescapable corner, but politicians heavily funded by the coal and oil industries are just like Dom [minus the muscle-T and sick car] with a sneer on their lips and apparent plans of their own that often defy commonsense or logic.

Political leaders continue advising states to reject the safeguards and guidance from the Environmental Protection Agency. Florida Governor Rick Scott went so far as to ban the use of the term "climate change" in his state. Hell, to put this into perspective, our political leaders recently held a contentious vote to even admit that climate change is real and not a hoax!

The risks to the health of our communities, families and environment are too great for the well-funded opposition to lack a plan for addressing climate change and for solutions to not be honestly and openly discussed.

In my best Dom grunt, we're all up because we are all moving Fast and Furious towards an inescapable rescue. For now, it appears that climate deniers have the same escape plan as Dom -- drive us off a cliff and hope we, or at least they, survive.