Fall fashion week is wrapping up in Paris today, but in the world of fast fashion consumers don't need to wait for the announcement of seasonal trends. Apparel industry leaders like H&M have hit warp speed supplying new styles almost weekly at affordable prices.

It's an ingenious model for getting consumers to buy more clothes, but one that requires tight production timelines. Yet H&M has fallen behind schedule on securing life-saving safety upgrades in their Bangladeshi supplier factories. Such delays are risky for a company that saw 21 workers killed in a fire at their supplier, Garib & Garib, in 2010 because the factory lacked viable escape routes.

Labor rights groups, including mine, published a report this week that provides a case by case review of H&M's top-rated suppliers in Bangladesh, showing a series of missed deadlines on the very repairs needed to prevent future fires or factory collapses like the 2013 Rana Plaza collapse that killed 1,138 workers. 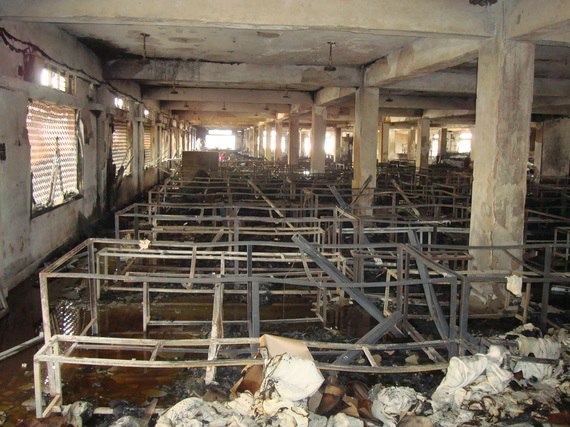 Our review of publicly available factory compliance reports revealed that all of H&M's primary suppliers were behind schedule in making essential safety renovations. Our analysis shows that 61 percent of the factories have yet to install fire-rated doors or enclose their stairwells -- the most important steps a factory can take to prevent workers from dying in a fire -- even though the repair deadlines have long passed.

Some people may wonder why single out that nice Swedish brand that sells those cute t-shirts that are as hip as they are cheap. It's a company that seems to have put all the right policies in place. When it came to taking action in the wake of the Rana Plaza factories collapse, they were the first to sign onto the Accord on Fire and Building Safety in Bangladesh -- thereby making a binding commitment to global and Bangladeshi trade unions to ensure necessary renovations would be made in a timely manner.

But H&M is the largest buyer in Bangladesh, and with great power comes great responsibility. H&M's push back on the schedules set by the Accord means they are not doing everything in their power to ensure factories complete these much needed repairs and upgrades. And let's be clear, fast fashion brands are masters of schedules and the most competitive brands have led the drive for the very tight production schedules and razor thin profit margins that have resulted in entrenched poverty among apparel workers and a lack of investments in factory safety. Results so dire the apparel and footwear industry is responsible for 5 of the 10 deadliest industrial accidents in the history of manufacturing.

To be sure, H&M's willingness to sign a legal agreement with trade unions is more than most American brands, like Gap, Walmart, and J.C. Penney's will do. Unlike the Swedes, these U.S. brands have far less experience -- almost none -- negotiating solutions with workers.

Instead, these dominant American brands have signed up for yet another voluntary program, called the Alliance for Bangladesh Worker Safety, which does not include a binding commitment to worker organizations and allows them to walk away without making a commitment to ensure repairs are financed and completed.

Yet H&M's size and continued growth (the company is now the world's second largest clothing retailer and its goal is to increase its number of stores by 10-15 percent per year) means it is a fierce competitor in the game of fast fashion, which is a key factor in the industry's drive to cut costs so they can sell more clothes at the same price or cheaper than the year before.

As a leader in this high-speed industry and the largest buyer of Bangladeshi apparel, H&M needs to deliver on their commitments and to seek a different course. Otherwise, the whole industry will continue to follow them in shirking their commitments.

Soon enough apparel brands will all be back to pushing factories for lower prices and faster production schedules. This is exactly the kind of pressure that made the managers at Rana Plaza beat garment workers to make them go to work even as the building was cracking. The risk of a building collapse instilled less fear in those managers than the risk of losing orders due to late delivery.