Some day soon, a burger and fries will no longer be the quintessential American fast-food meal.

By 2020, the only burger joint in the top five fast-food restaurants in America by sales will be McDonald's, predicted a note published Monday by analysts at Janney Capital Markets, a financial-services firm. Burger chains Wendy's and Burger King, currently fourth and fifth in sales, will be knocked out of the top five by Dunkin' Donuts and Chick-Fil-A, respectively. Meanwhile, so-called "fast casual" chains like Chipotle will move higher.

Check out the 2013 rankings and Janney's 2020 predictions below: 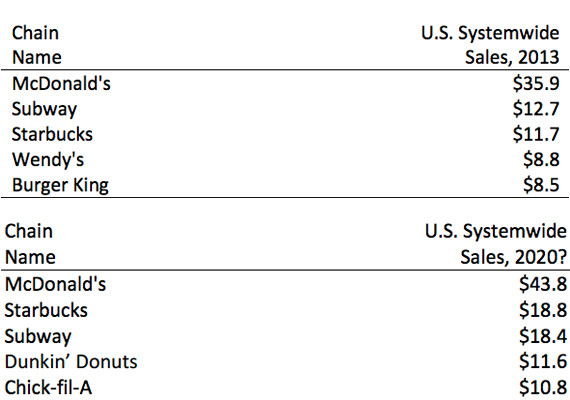 Fast-food burgers are losing popularity for a few reasons. Many Americans, particularly those with higher incomes, are turning to more-upscale chains like Starbucks or Panera. They're also looking for higher-quality food and favoring those chains, like Chipotle and Chick-Fil-A, that promise to deliver it.

And the lower-income customer base for McDonald's, and its burger-flipping rivals Wendy's and Burger King, is still struggling, years after the recession, McDonald's Chief Operating Officer Tim Fenton recently admitted.

All of this makes it tougher for burger chains like Wendy's and Burger King to stand out. McDonald’s, on the other hand, will probably keep dominating the industry, largely because it has been such a huge presence for so long that its position can't realistically change much any time soon, Kalinowski said.

And McDonald's is trying to adjust to Americans' changing appetites -- for example, by trying to convince customers that it, too, makes quality food. Based on a recent Consumer Reports survey that found McDonald's rated lowest among all fast-food restaurants on taste, that might be a tough sell.