According to a 2013 Gallup poll, nearly 30 percent of Americans report eating at fast food establishments on a weekly basis. We know this gut-busting grub saturated in calories, fat and sodium is, in part, contributing to our nation's obesity epidemic. We also know the "food" we ingest sometimes does not seemingly qualify as food at all (also see: this 14-year-old McDonald's hamburger).

And yet, despite the eye-widening facts, we still want those French fries. What witchcraft do big companies like Mickey D's, Wendy's, and others employ that have us dreaming of fast food when hunger hits -- and even when it doesn't? Unsurprisingly, there are many tactics these big corps practice to get us in their doors and put their burgers in our bellies.

1. Fast food companies take advantage of our desire for convenience. 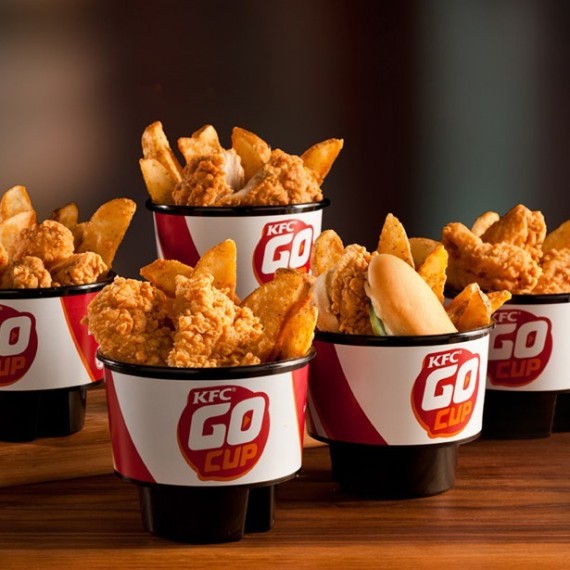 Photo: KFC
According to a 2006 Eating Patterns In America report released by The NPD Group (formerly National Purchase Diary), Americans value convenience over health. This means we'll knowingly spend our money on cheap-to-make, fat-laden food items that are devoid of nutrition, as long as they are tasty and easy to acquire.

So it's no surprise that the ease and convenience of fast food now goes beyond items like KFC's "Go Cup," which is near-irresistible when you're hungry and strapped for time. There are more than 200,000 drive-thru restaurants in America, making our dining choices as simple as, well, a pit stop. In 2011, 57 percent of visits made to fast food hamburger joints were done without stepping out of the car. Gluttony has never been so convenient.

And fast food joints don't just cater to our desire for convenience -- they simultaneously intensify that desire, too. A series of social psychology studies, recently summarized in the New York Times, found that just thinking of fast food made people more hurried, more impatient and less likely to slowly savor experiences. "While the ubiquity of fast food is undoubtedly driven by consumer demand for instant gratification," wrote one of the studies' authors, "it may also play a role in exacerbating that very impatience -- and not just for food, but in many facets of our lives."


2. Fast food companies use "aroma marketing" to tickle your senses and make their product virtually irresistible.

Has the scent of crisped McDonald’s fries ever enticed you to walk through those golden arches? Well, your nose is the victim of a very calculated marketing ploy.

Even if you didn't consider yourself hungry, when your nose catches a whiff of a tempting food like fries or freshly baked Cinnabons, it tells your brain, "I smelled something delicious." Your body, in response, increases the production of ghrelin, which can stimulate your appetite. Your brain then reads this as hunger, and off you go -- following your nose to the trail of food that's nutritionally lacking.

Cinnabon bakery chains, for example, keep the ovens near the front of their stores to lure customers inside (if you've ever been to a mall, this is likely the sticky sweet scent that infiltrates your nasal passages). At Cinnabon, employees will heat sheets of cinnamon (sans the "bon") to keep everything smelling fresh. Panera Bread Company plans to reassign shifts at the majority of their locations to make sure their stores are emitting the scent of freshly baked bread at peak consumption hours, the Wall Street Journal reported in May.

3. Fast food companies use vocabulary to make your mouth water -- quite literally.

Fast food companies make it their prerogative to tell you what to taste. "If you market a hamburger as juicy, people eat it and think, 'Man, this is incredibly juicy,'" Dr. Brian Wansink told Men's Health. The actual taste of the food still has to do some of the lift, but the description of the food can influence what customers taste (think KFC’s "Finger lickin' good," Subway’s "eat fresh," Arby's "slicing up freshness” and Papa John's "better ingredients, better pizza," etc). You are subliminally trained to believe in a taste that has yet to touch your tongue.

Brands use other buzz words that have nothing to do with taste and everything to do with consumer behavior and preference to sell their menu items. As Time reports, "premium" was one of the most persuasive words of 2011:

A 2011 Technomic report found that premium was the most persuasive menu term for getting customers to order an item with beef; 28% of surveyed consumers said they’d be more likely to order beef with the word premium, and they’d be willing to pay a 5% premium for their premium order. Well, surprise, surprise, a study conducted by Mintel for BurgerBusiness last year reported that usage of the word premium on restaurant-chain menus has soared. By its count, there were 138 "premium" offerings on chain menus last year, compared with just 69 in 2007. 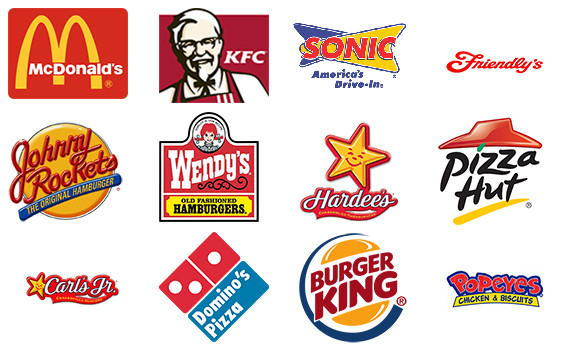 Sure, Burger King, In-N-Out, KFC and the like attempt to distinguish themselves with varying slogans, treats and mascots. But the majority of major fast food chains stick to a similar color scheme in their branding. Studies have shown that these warm colors in particular activate your hunger and grab your attention. Plus, we mentally connect the color red -- the same used in stop lights and traffic signs -- with immediacy, which, again, taps into our desire for convenience. (Even delivery sites like Grub Hub and Seamless have pulled this trick to signify urgency and ease.)

5. Fast food companies promote their products on big, eye-catching billboards, making it hard for you to get their burgers off your brain. 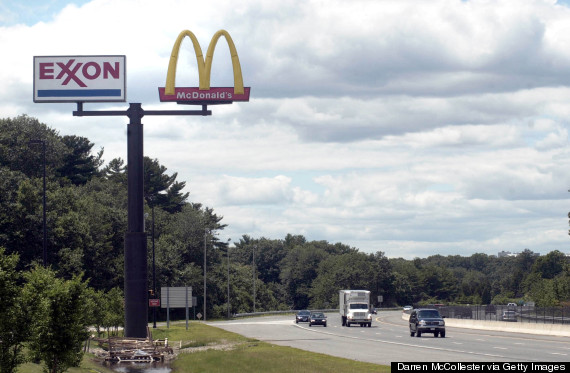 A 2013 UCLA study published in the BMC Public Health journal found a correlation between outdoor food advertisements and modest increased likelihood of obesity. While the research does not conclude that these visible ads cause obesity, it does suggest a connection between billboard marketing and fast food consumption. According to a 2010 report published by the Rudd Center for Food Policy and Obesity, fast food establishments spent a collective $156 million on outdoor advertising in 2009. Outdoor ads are the second most purchased media type, tying with radio and losing out to TV.

6. Fast food companies target children, and can influence their eating habits and preferences. 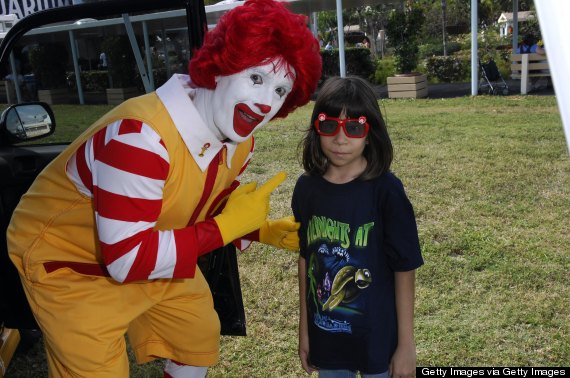 Fast food companies target our youth, it seems, from the minute they depart from the womb. According to a report produced by the Yale Rudd Center, children were exposed to an average of 13.1 food ads every day in 2013. The ads were primarily for fast food restaurants. Over the past six years, the report shows, children's exposure to healthy food advertisements has declined, while unhealthy food endorsements have hogged more air time. One 2012 study revealed that adolescents who were familiar with fast food television ads (we've all had McDonalds' "ba-da-ba-ba-ba" stuck in our heads at one time or another) were at higher risk for obesity.

These mega-brands don't just entrust the boob tube to infiltrate the impressionable minds of U.S. youngsters; they've also crept onto the Internet and social media platforms, where kids spend a significant amount of time. Mr. Ronald McDonald has hopped from the small screen to the even-smaller screen: In 2011, McDonald's designed a new campaign in which the clown urged kids to visit his website and share "Ronaldgrams" with their friends.

Even more, fast food meals intended for kids are likely to include toys and giveaways, and these promotions establish an emotional connection to brands, "making children more likely to continue eating at fast food chains and take their own families there as adults." Happy meal indeed.