Despite fast food companies' pledges to up the nutritional quality of their offerings, a new study suggests that little has changed health-wise in the past 14 years.

The study, sponsored by the Robert Wood Johnson Foundation and published in the American Journal of Preventive Medicine, reveals that the nutritional quality of fast food meals improved only 3 percent between 1997/98 and 2009/10. Researchers used the USDA's healthy eating index; on average, fast food meals only improved from 45 to 48 of 100 possible points. In comparison, the average American’s diet has a score of 55. 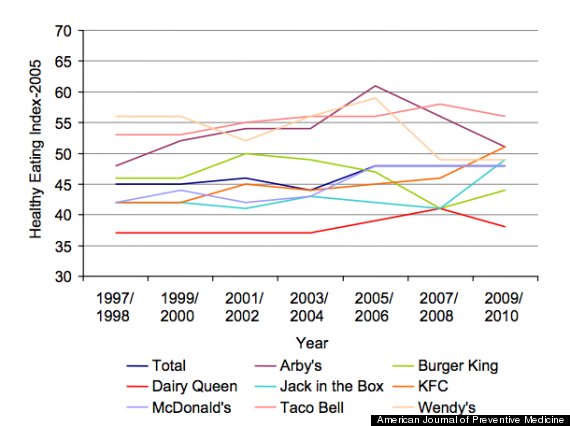 "More than one quarter of American adults consume fast food two or more times per week," the study reads. "Fast food accounts for 15 percent of Americans’ daily energy intake. Speciﬁcally, 37.4 percent of sales of meals and snacks away from home are at limited-service eating places such as fast-food restaurants."

Particularly confusing, in light of this news, is the proliferation of health terms on menu descriptions. The study notes that market research for 2010-2011 shows that use of the word "healthy" increased by 86 percent and the term "low-fat" by 33 percent.

The study does note, however, that some chains have made positive changes. Among them, McDonald's decision to cut the amount of fries in its Happy Meals and add apple slices. Still, the study's researchers determined this is not enough to make up for the "substantial disparity between current menu offerings and many of the components of the USDA's Dietary Guidelines for Americans."

Margo Wootan, the director of nutrition policy at the Center for Science in the Public Interest, was dismayed by the lack of improvement. "This tiny increase is disappointing, and a bit surprising, given the many pronouncements by companies that they have added healthier menu options, switched to healthier cooking fats, are reducing sodium, and are touting other changes in company press releases and advertising," she said in a journal press release.