America is in the throes of a health food revolution if articles on kale and quinoa are any indication, but that doesn't mean fast food has loosened its grip on the American appetite. A recent Gallup poll reveals that eight out of 10 Americans eat at fast-food restaurants at least once a month.

The stat has improved only slightly since 2006, the last time Gallup asked the question.

The survey also found that young adults, aged 18 to 29, eat fast food more often. Additionally, men are more likely to eat it than women, and across racial and ethnic groups, blacks and Hispanics tend to eat it most often.

Interestingly, Americans earning $75,000 a year or more were more likely to eat fast food at least once a week than people in lower-income groups. 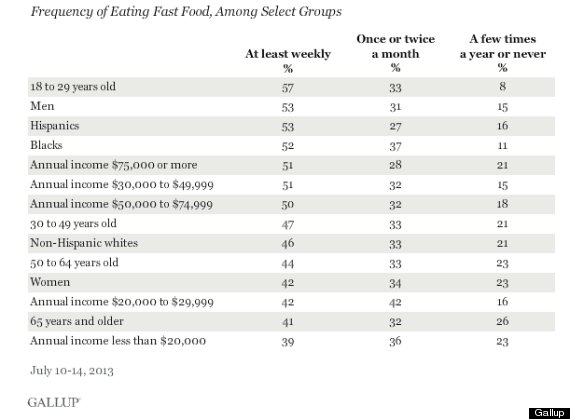 Gallup experts conclude that although a large portion of the American public believes fast food to be unhealthy, most people visit fast food establishments frequently. The numbers suggest that "the appeal of the product -- be it the relatively low cost, the taste, or the convenience -- outweighs the health concerns."