For three decades now, the idea that robots will replace fast-food workers has been more of a pipe dream of tightwad business owners than a reality. But a group of engineers claims to have finally found a way to get rid of pesky humans once and for all.

Momentum Machines of San Francisco has invented a fully-automated contraption that can grind meat, slice tomatoes, grill patties, wrap fully cooked burgers and do pretty much anything else human fast-food workers can do. The machine is capable of cranking out 360 burgers per hour, according to Momentum Machines' website.

The group plans to sell its invention to restaurants and, eventually, open its own chain to sell gourmet burgers at fast-food prices by eliminating the cost of paying line cooks. This, its website claims, will "democratize access to high quality food, making it available to the masses." 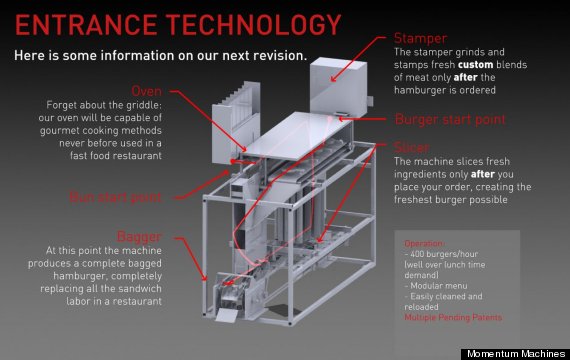 A schematic of Momentum's invention, which grinds custom blends of meat, then roasts patties, slices tomatoes, assembles the sandwich and even bags the final product.

Momentum, which declined to comment to The Huffington Post, doesn’t offer prices on its website, nor does it have a clear business plan or timeline for the chains it claims it will open.

"Unfortunately we are focused on other priorities at the moment and cannot divert resources to press," Vardakostas told HuffPost.

A profile of Momentum, published Sunday by the robotics blog Singularity Hub, generated a new wave of interest in what conservative writers have dubbed the “minimum-wage-crushing” robots.

This comes at a time when the humans currently filling fast-food jobs are demanding higher pay and better working conditions, including calls for a $15 minimum wage. Those who oppose raising the lowest guaranteed wage argue that if it becomes more expensive to employ humans, restaurant owners will simply replace workers with robots.

Last year, the conservative Employment Policy Institute took out a misleading full-page ad in the Wall Street Journal showing a hachimaki-wearing Motoman SDA10 cooking food. This, they argued, would be the future of chefs if employers had to absorb the cost of a $15 hourly wage. But the Japanese company that made the humanoid machine told HuffPost last year that the robot “does not have the real capability for” kitchen work.

In fact, the fast-food industry has been inching toward automation for years, with little success so far.

In 1988, a clampdown on hiring undocumented immigrants shrank the pool of workers willing to flip burgers for $3.35 an hour, then the minimum wage. A spate of articles in newspapers, a popular form of distributing information at the time, predicted that pizza chains and burger joints would soon opt for R2-D2, a fictional droid from the Star Wars series, over workers.

“The fast food industry has no alternative; it will have to robotize,” Joseph Durocher, a professor of hotel administration at the University of New Hampshire, told The New York Times that year. “No longer can they afford the luxury of having human workers standing at the beverage bar with a cup or watching hamburger patties on a grill.”

Instead, lately, the trend has been toward more, not fewer, humans: Fast-food restaurants employ nearly 3.8 million people -- the highest number in 10 years, according to statistics aggregator Statista.

"Ultimately robots are not going to replace humans in food service," Darren Tristano, a food industry expert at the research firm Technomic, told HuffPost. "They would likely reduce some of the labor costs, but I can't believe it'd be significant, even to a burger chain."

But that doesn't mean fast-food jobs are safe forever. A 66-page report published last week by the Pew Research Center found that 48 percent of experts surveyed believed that advances in artificial intelligence will displace more jobs than they create by 2025.

“If you look at the two great scourges of the modern world, the first being rampant unemployment and the second being income inequality,” Jerry Kaplan, an entrepreneur who teaches at Stanford University, said during a 13-minute segment broadcast in April on the radio show On The Media, “I think that a major cause of both of those is the accelerating progress of technology in general, and of artificial intelligence in particular.”

Kaplan said that while robot designers become increasingly wealthy by “skimming off the increased economic value they’re adding to society,” both blue- and white-color workers -- from fry cooks to lawyers and doctors -- will suffer.

"Robot armageddon is going to be economic," Kaplan warned, "not a physical war."

UPDATE: This story has been updated with a statement from Momentum.