Do not be shocked if Sunday, 4/20, is a high-sales day for extreme foods like Doritos Locos Tacos and Stacked Grilled Cheeseburgers. That's because 4/20 is a high holy day for stoners, and many of them will probably be craving food mashups like these.

The companies behind these foods don't make any specific connection to weed users in their advertising, and late-night snacking menus appeal to non-stoners as well. But that doesn't mean some messaging around the products isn't subtly making its way to the right people.

“Take someone like Taco Bell, they’re open really late at night, and they’re targeting in general a younger generation; do you think these people don’t have the munchies that are going there?” said John Stanton, a professor of food marketing at St. Joseph’s University. “Do they specifically say, 'We’re here for those pot smokers that get a little hungry after a few tokes?' No, they don’t, they don’t need to.”

It’s not just Taco Bell courting late-night eaters with its “FourthMeal” campaign. Jack in the Box is using a “Munchie Meal” -- full of strange food combinations like a fried chicken sandwich with cheese sticks, a side of two tacos and some fries -- to get late-night snackers in the door past 9 p.m. Other fast-food eateries have tested expanded late-night offerings in recent months too. And of course we all know why Harold and Kumar go to White Castle.

Some of these campaigns have become even more explicit. Carl's Jr.'s employees donned "Wake and Bake" uniforms of 2012, and General Mills reunited comedy duo Cheech and Chong for a "magic brownie adventure" video in 2011 to sell Fiber One bars.

As pot becomes more mainstream, including legalization in some states, experts and consumers have started to wonder more vocally about whether ads are targeting pot smokers, said Denise Lee Yohn, a brand expert who has worked with companies like Frito-Lay and Burger King. In the future, it may even make some marketing sense to do away with the euphemisms, Yohn said. That's partly because you'd almost have to be high to want some of these bizarre foods.

“When you see products that are all these calories and all this fat and carbs, you’ve got to wonder, who would really find that appealing?” said Yohn. She said the first time she tried Taco Bell’s new breakfast creation, the Waffle Taco, she thought, "If you were either hungover or you were high, this would be a great product."

The proliferation of all these late-night options and strange food combinations makes sense even if you take stoners out of the equation, according to Yohn, because fast-food restaurants have already innovated about as much as they can with conventional menus. “There’s only so many new burgers that you can produce,” she said. High-calorie, odd foods can also appeal to plenty of non-stoners -- pregnant women, students up late studying or hungry workers on the night shift.

But even if companies aren't trying to appeal to stoners, they're probably aware of who's eating their food.

"Companies recognize that their products are being used in ways that they might not have been intended," Stanton said.

Taco Bell President Brian Niccol acknowledged as much recently, a few hours after telling the Reddit community that he didn’t know what 4/20 was. He said that the brand's fans “share what they’re up to, so we do get some interesting insight from people sometimes.”

And in some cases, companies can subtly market to those fans’ sensibilities without offending more conservative customers.

“There are ways of getting these messages across, especially to the people that are users,” Stanton said. Imaging can speak to both audiences at once without being overt, he said. "Most of these brands have billions of dollars tied up in the value of their brand, they won’t jeopardize that to go after a pretty small niche.”

There is precedent for using subtle advertising to target certain groups that society might momentarily deem controversial, Stanton said. Decades ago, when Americans were less accepting of the LGBT community, companies like cruise lines would send direct-mail materials to gay customers that featured images of same-sex partners traveling.

Are these companies marketing to stoners? Check out these ads and you be the judge:

Jack In the Box Munchie Meal: 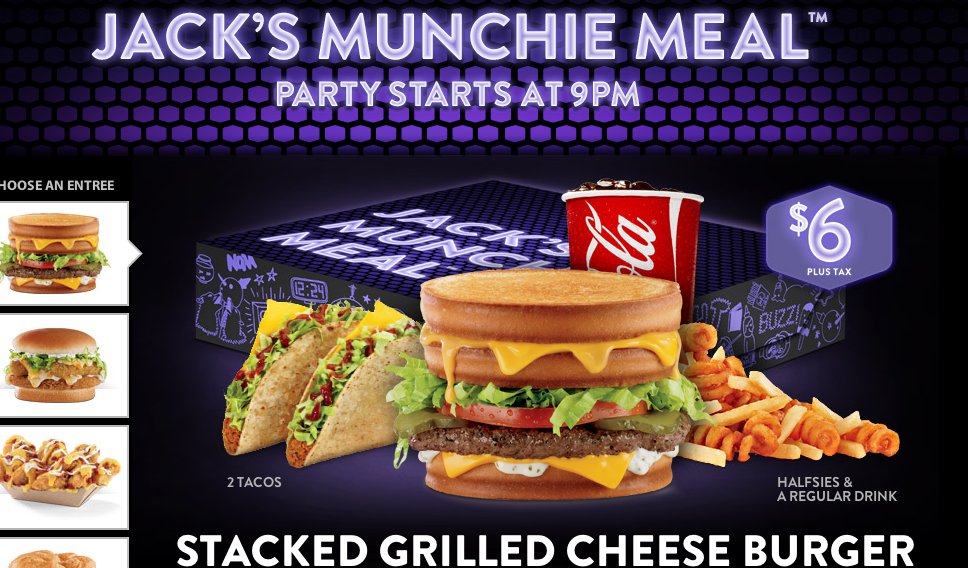 A 2007 commercial for Taco Bell's "fourthmeal":

Skateboarder Rob Dyrdek's Loud Mouth Burritos, which have a calorie count of 420:

Ben & Jerry won the Internet with this tweet on the day after legal weed sales started in Colorado:

BREAKING NEWS: We're hearing reports of stores selling out of Ben & Jerry's in Colorado. What's up with that? pic.twitter.com/zBs8nyxZWn