Workers at a Detroit McDonald's walked off the job early Friday morning, part of a wave of fast food industry strikes that have recently swept across cities around the nation.

Campaign organizers are expecting hundreds of workers to strike in Metro Detroit throughout the day at national chains like McDonald’s, Popeyes, Wendy’s, Little Caesars and Subway. Striking employees are demanding $15 an hour -- far more than the state's $7.40 an hour minimum wage many fast food industry workers are paid -- and the right to form a union without retaliation.

Though fast food work generally pays much less than needed to support a family, with many employees earning so little they are officially poor, in the Detroit area such jobs now outnumber those in the auto industry by nearly two-to-one, according to organizers.

About 20 employees began striking at 6 a.m. at a McDonald's located at 10400 Gratiot Ave. in Detroit, according to a release from D15, the campaign helping to coordinate the Detroit actions. The operation's management brought in replacement workers who also walked off the job, according to social media reports. Seven employees of a Long John Silvers at 3755 E. 8 Mile also left their posts this morning in Warren, Mich., shutting down that operation as well, according to the D15.

McDonald's worker Keith Bullard, who has started an online petition for support through the website MoveOn, explained his reasons for participating in the strike in an email sent to The Huffington Post

"This morning, I walked off my job at McDonald's. I'm a 29-year-old husband and a father of two. My wife can't work because of health problems—and the $7.50 an hour I make at McDonald's just isn't enough to cover my family's basic needs," he said.

"Can anybody really feed children and take care of a family on the current minimum wage of $7.40 an hour?" Pastor Charles Williams II of Historic King Solomon Baptist Church, a leader involved with the campaign, asked in a statement emailed to The Huffington Post. "If we truly want to stimulate the economy then we must stimulate the wages of those who collectively have the buying power to strengthen the economy. It's simple. I support the workers today because, raising their wage, raises our economy."

Fast-food jobs are among the most common jobs in the U.S., as well as the lowest-paying. According to the Bureau of Labor Statistics, in 2010 there were 2.9 million "food prep and serving workers," a category covering fast food employees, who were earning an average of just $19,100, or $9.18 per hour.

Detroit is the fourth city to see fast food strikes in recent weeks, after New York City, Chicago, and St. Louis, where workers are all demanding living wages.

Although the workers and advocates in each city are affiliated with different organizations, they've communicated with one another and have even travelled on charter buses to one another's cities to show support during the strikes.

This recent wave of strikes can be traced back to November, when about 200 fast-food workers in New York walked out of their restaurants, demanding 15 dollars an hour and the right to form a union. In April, around twice as many New York fast-food workers participated in a second strike, and that action, in turn, inspired both fast-food and retail workers to stage a similar demonstration in Chicago.

On Wednesday, dozens of fast-food workers in St. Louis followed suit. Among them was Jamanda Gordon, a college student who said half her paycheck goes to pay off the loan on her car, which she needs to travel between home, school, and work. She said she was tired of working hard just to stay out of debt. "I'm over it," she said. 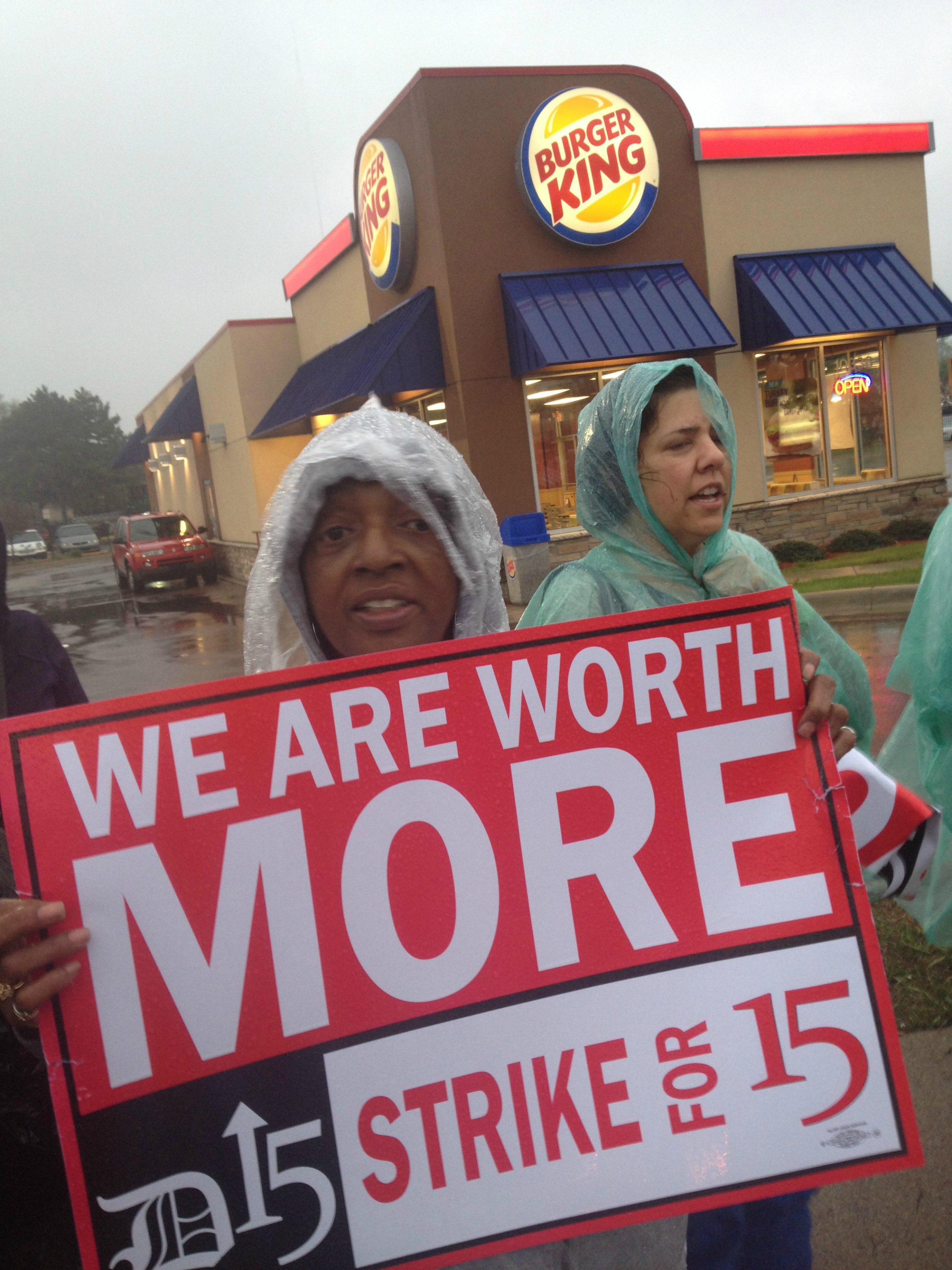