24/7 Wall St.: The fast-food industry is one of the nation’s largest employers of low and minimum wage workers. According to one group, often the industry workers’ pay is not enough and many turn to government programs for assistance.

According to the National Employment Law Project’s (NELP) newest report, because the fast-food industry pays its workers less than a living wage, U.S. taxpayers must foot the bill in the form of the public assistance programs these workers must use to get by. McDonald’s alone, according to the group, cost taxpayers $1.2 billion last year. Based on NELP’s estimates, 24/7 Wall St. reviewed the annual costs of providing public assistance to low wage employees working at the seven largest publicly traded fast-food companies.

“What this report shows,” explained NELP policy analyst Jack Temple, “is that whether or not you work in the fast-food industry or eat fast-food, the industry is costing you. The low wage business model that this industry is based on drains resources from the economy by forcing low-pay workers to rely on public assistance in order to make ends meet.”

These public assistance programs include the earned income tax credit, SNAP benefits (also known as food stamps), Medicaid, the Children’s Health Insurance Program, and the Temporary Assistance for Needy Families program. The largest of these is Medicaid. “Almost 90% of workers in the fast-food industry do not get health insurance,” Temple said. “In addition to being a low-wage business model, it is also a virtually no-benefit business.”

emple added that while these companies are attempting to save money by paying their employees less, they may in fact be saving much less than they think. One such cost may come in the form of the industry’s high turnover rate. “Companies are just churning workers, and that’s due to low wages. When you invest in higher wages, you actually get significant savings in the form of reduced employee turnover.”

At least one group has taken issue with NELP’s argument. Employment Policies Institute research director Michael Saltsman explained that the current system of lower wages and government benefits is much more ideal than raising the minimum wage substantially. “The earned income tax credit has lifted thousands of people out of poverty, and it has done it without the consequences of increasing the minimum wage,” Saltsman said.

Saltsman added that companies simply are not going to hire as many people if wages increase substantially. “You can have a $15 minimum wage, or have the same number of opportunities that currently exist in the fast-food restaurant industry — but you can’t have both.”

NELP argues, on the other hand, that these companies are in fact in the position to pay their workers more without hurting their bottom line. The two largest companies, McDonald’s and Yum! Brands, had a combined net income of $7 billion. These companies are profitable and growing, the group argues, and they owe it to the employees who help make them successful to pay them closer to a living wage.

In addition, while these companies pay many of their low-level workers a minimum wage, CEO compensation for these seven companies was a combined $52.7 million in fiscal 2012. Yum! Brands CEO David Novak alone earned $14.1 million last year.

Based on a recent report by the National Employment Law Project (NELP), “Super-Sizing Public Costs,” 24/7 Wall St. determined the seven publicly-traded companies that cost the government the most money. Figures on CEO compensation, and the money the companies’ spent on dividends and share buybacks for stockholders in fiscal 2012, were also provided by NELP. Income and revenue figures are from Morningstar and also for fiscal 2012. Salary figures for individual occupations are from Glassdoor.com. Changes in share prices are from Google Finance.

Here are the fast-food chains costing taxpayers the most money, according to 24/7 Wall St.:

PHOTO GALLERY
The Fast-Food Chains Costing Taxpayers The Most Money
Download
Calling all HuffPost superfans!
Sign up for membership to become a founding member and help shape HuffPost's next chapter
Join HuffPost 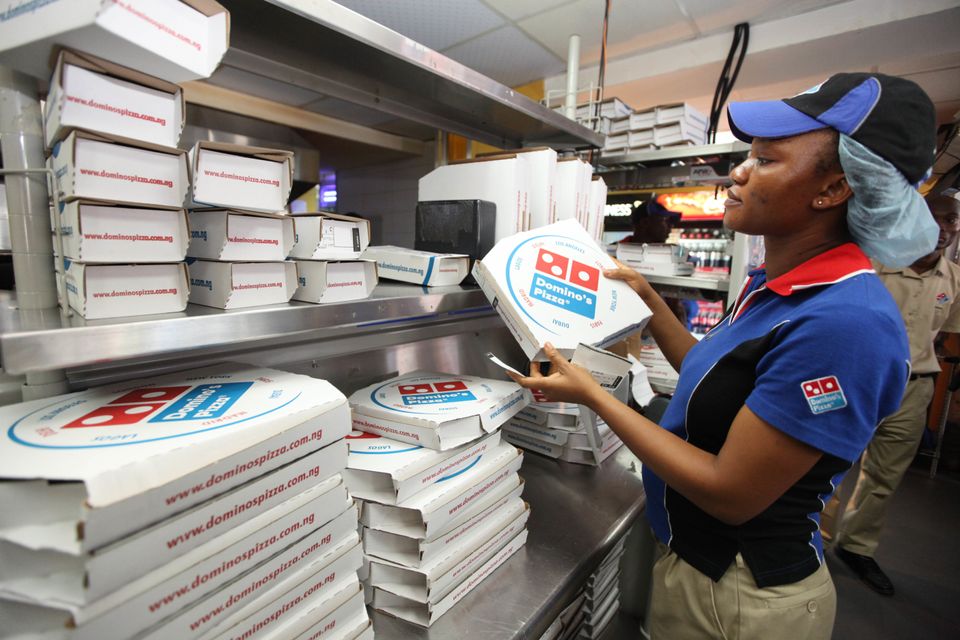 1 / 7
7. Domino’s
> Cost to U.S. taxpayers: $126 million > CEO Compensation: $9.1 million > U.S. restaurant workforce: 73,920 > Revenue: $1.68 billion > Net income: $112 million Domino’s has more than doubled its net income since 2008, when the company posted $54 million in earnings. Many of Domino’s employees are likely enrolled in government programs. According to NELP, the company could have raised employee wages rather than spend that money expanding aggressively overseas and investing heavily in technology aimed at easing the ordering and delivery process. The stock has surged over the last five years with the share price up more than 900%. Meanwhile, the compensation of J. Patrick Doyle, Domino’s CEO since 2010, amounted to more than $6 million in 2011 and more than $9 million in 2012. <a href="http://247wallst.com/special-report/2013/10/21/fast-food-chains-costing-taxpayers-the-most-money/" target="_blank">(Read more at 24/7 Wall St.) </a>
AP