The "TPP," or Trans-Pacific Partnership, is our nation's newest proposed trade deal. It was negotiated without democratic input, and they're trying to ram it through Congress the same way. Like NAFTA before it, the TPP would kill jobs. It would also cause lasting harm to democracy, here in the United States and around the world.

There has been an understandable sense of outrage over the Obama administration's attempt to ram the most extreme trade deal yet through Congress with a "fast-track" provision that forbids amendments or filibustering. Representatives who have had very little chance to review the bill will be expected to vote on it without the chance to change it.

Dave Johnson has rounded up some of the latest reactions from across the political spectrum, including objections from House Democratic leader Nancy Pelosi and other Democrats in Congress over its lack of "transparency" (Leader Pelosi's term). And it's true that the treaty's provisions have been kept secret from everyone -- everyone, that is, except for the 600 corporate lobbyists and executives who've been reading it all along.

The imbalance of power which this reflects doesn't end on our nation's shores.

In this insightful analysis of TPP negotiation records released by WikiLeaks, doctoral candidate Gabriel Michael illustrates the ways in which the United States has been at odds with the rest of the world -- or, at a minimum, has held substantially different positions from other nations in a number of key areas.

This graph from Michael summarizes the relative positions of the nations involved: 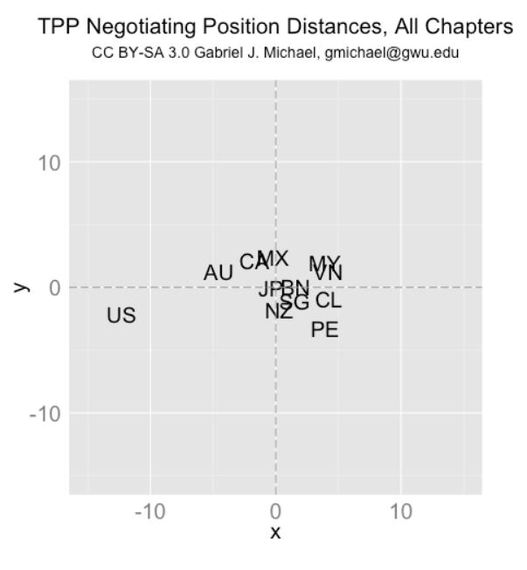 When it comes to this deal, "We Are Not the World." As Mr. Michael notes, "the TPP is anything but an agreement amongst 'like-minded' countries, as the United States trade representative has described it."

The U.S. differs most sharply from the other nations on matters of intellectual property. The WikiLeaks documents show that every other country in the negotiations stood against American intellectual property demands. But the U.S. also has significant disagreements with the other nations on matters of law, rulemaking, and the environment. There's evidence that the United States is pushing back on climate change and resisting other forms of environmental protection. Sen. Elizabeth Warren has expressed concern that the United States may be attempting to restrict financial regulations, and has taken a position on the topic of tobacco.

President Obama's negotiators also fought for the right of corporations to sue foreign governments over their laws and regulations. Australia has objected to this provision on the grounds that it gives corporations equal status with independent nations -- but, as we will see, that's implicit in much of the TPP process.

Our government isn't just trying to push through a draconian treaty. It's working to make it even worse.

But why is the U.S. so sharply out of alignment with the other countries negotiating this treaty? Probably because it's the nominal home of some of the world's largest corporations. (They're "nominally" American because, although they're typically run by Americans, they tend to employ most of their workforces and pay their taxes -- if at all in -- other nations.)

The U.S. negotiators' hard-line positions conform closely to the interests of these nominally American corporations. Whether it's Big Tobacco, Big Pharma, tech, Hollywood, major polluters like the oil companies, or risk-taking financial institutions on Wall Street, the American negotiators have been fighting for their interests -- while disregarding the interests of the taxpayers who pay their salaries.

Although these negotiators were appointed by Democrats, their positions don't seem to differ from those taken by Republican administrations. That reflects a political system that is increasingly being corrupted by campaign cash, and by the post-political work opportunities which American-run multinationals can offer sitting politicians.

It's easy to understand why President Obama and his team want to "fast-track" this deal. Not only are its provisions unpopular with the general public, but any changes that Congress might make would then have to be negotiated with all of the treaty participants. And that list of participants isn't restricted to the nations who will become this treaty signatories if it is passed.

The real negotiations, the toughest give-and-take, has almost certainly not been among sovereign nations but among "sovereign" corporations. That's why hundreds of corporate representatives saw this treaty before any elected representatives did. In many cases, they were the ones doing the wheeling and dealing. Rice producers, dairy corporations, financiers, corporate beef, Big Pharma, and manufacturers of textiles, footwear, and technology ... they had to negotiate with their governments, and perhaps with each other as well.

Here's food for thought: Fast-tracking could become the model for a new and profoundly subversive model of governance -- one in which elected government becomes little more than an afterthought to corporate-backed deal-making. It's not hard to imagine a dystopian future where this becomes the norm.

In the right hands it might make a good science-fiction novel: a world in which individual governments, treaty organizations and even the United Nations have been replaced by a new governing body comprised entirely of corporate representatives. Think of it as a World Financial Parliament or a Global House of Corporate Lords, where the only "voting" the rest of us do happens when we watch a movie, play a video game, or take a prescription medication.

And even when we do, we don't really have much of a choice at all.

But the fight isn't over. Congress is reluctant to pass this unpopular bill, especially in an election year. That makes public pushback especially important right now. An impressively broad coalition of organizations, including the Campaign for America's Future, has come together to oppose fast tracking the TPP. You can get more information and take action here.