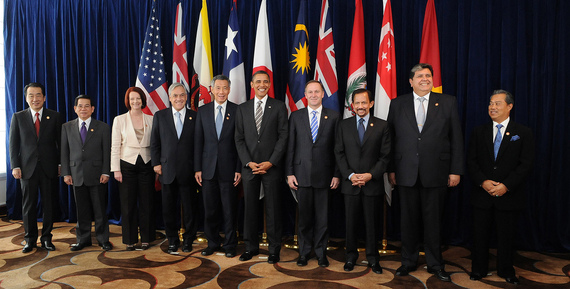 "Our trade agreements should not just be good for Wall Street. It should also be good for Main Street." -- Senator Barack Obama, 2007

The Trans-Pacific Partnership (TPP), if ratified by the United States, is predicted by some to bring about widespread economic opportunity for the American worker. The Obama administration claims the TPP is expected to boost U.S. economic growth by creating new Americans jobs for small business and major corporations alike. The administration also believes Made-in-America exports will increase, labor rights will be expanded and strong environmental protections will be promoted among trade partners.

Yet the last time such a large scale trade agreement was ratified, hundreds of thousands of Americans lost their jobs, weak environmental standards were continued by a partner country, and multinational corporations were given substantial legal protections at the expense of the average worker and consumer. The trade deal fallout I'm describing are the result of NAFTA -- which promised many of the same benefits of the Trans-Pacific Partnership. Those in Congress who voted for NAFTA can perhaps claim ignorance since no trade agreement of that scale was ever attempted prior to its ratification. No such claim can be made by the Obama administration or Congress this time.

It seems the TPP trade agreement is so good the Obama administration wants to fast-track it through Congress. Fast-tracking the TPP through Congress does an injustice to both the general welfare of the United States and the common good found at the heart of Catholic social justice. Simply put, if the TPP is good for the American people it should be able to stand scrutiny in front of Congress.

What would fast-tracking the TPP entail? Essentially, it would give full authority to the president to negotiate the trade agreement while Congress can only approve or disapprove the final deal. Such authority would strip Congress's ability to amend or filibuster what the president sends them to vote on.

Secrecy surrounding the TPP trade negotiations and the living history of NAFTA has left many Americans doubtful about the benefits of such a trade agreement.

During a 2008 Democratic primary debate, then-Senator Obama said, "... it is absolutely true that NAFTA was a mistake." Yet early in Obama's presidency, he reversed a campaign promise to renegotiate NAFTA because of global economic instability. Perhaps now that the economy is on better footing, the president should worry less about fast-tracking the TPP and more on fixing existing trade agreements. The NAFTA trade agreement is between three nations. The TPP involves four times as many nations. One can only hope and pray the problems NAFTA is facing won't be four times worse if the TPP is fast-tracked and ratified.

As the president draws closer to requesting fast-track authority, centrist think tanks such as Third Way are trying to distance the TPP from NAFTA by comparing the TPP to 'more successful' trade deals since 2000. Third Way even admits NAFTA hurt some blue collar workers. Third Way and other proponents of the TPP claim they've learned from past free-trade mistakes. I find that very hard to believe.

It's difficult to believe because good intentions and assurances don't guarantee good results. As Pope Francis wrote in Evangelii Gaudium, "Each meaningful economic decision made in one part of the world has repercussions everywhere else; consequently, no government can act without regard for shared responsibility." The repercussions of such a massive trade deal calls for an inclusive and transparent debate between the president and Congress.

If the president is confident the TPP trade agreement is in the best interest of the United States, then he should have no concern about letting Congress propose amendments that can be shared with partner nations during negotiations. I understand that in any kind of negotiation there must be compromises. Yet as far as I can see, the American people don't have a seat at the table during discussions. The closest thing to representation is Congress -- which through fast-tracking is poised to surrender its voice to the president.

There are too many controversial provisions of the TPP left unresolved for to it be fast-tracked through Congress. With the history of NAFTA as our guide, it should be abundantly clear to the American people and Congress the president and his administration have a lot more work to do until the TPP can be seriously considered for ratification, let alone fast track.