NEW YORK -- The latest jobs report is a reminder of something that's been easy to forget these past few years: America is slowly getting back to work.

Job growth is occurring, but it isn't yet evenly distributed. So, using Bureau of Labor Statistics data, HuffPost created a graphic of the fastest-growing job sectors of the economy. Another graphic shows which regions are observing job gains or losses in a variety of critical sectors.

The data cover a three-year period from June 2009 (when the recovery officially began) to June 2012, several months before the September jobs report. Some of the numbers will be unsurprising. Mining jobs, for example, have experienced explosive growth as a result of the oil and natural gas boom. Employment in the industry went up 24 percent over the first three years of the recovery.

But there are also some surprising nuggets buried within the data. The overall growth of the health care sector has been widely reported -- less well-known is the explosive, 19 percent job growth in outpatient care centers, which accounted for more than 100,000 new positions. Retail as a whole has generally fared well -- but it has been car dealers, perhaps buoyed by the auto industry rescue, that have made out the best.

On the negative side of the balance sheet, state and local government jobs like teaching lead losses in many parts of the country. California lost an astounding 112,700 positions in city halls and classrooms. Michigan has a far smaller population, but it also lost nearly 40,000 local government jobs. More of those jobs would be around today had Congress passed President Barack Obama's American Jobs Act.

The Golden State also bled 32,400 manufacturing jobs. Real estate looks bad in the vast majority of states -- with the surprising exception of Florida (it had a low floor to start, though). 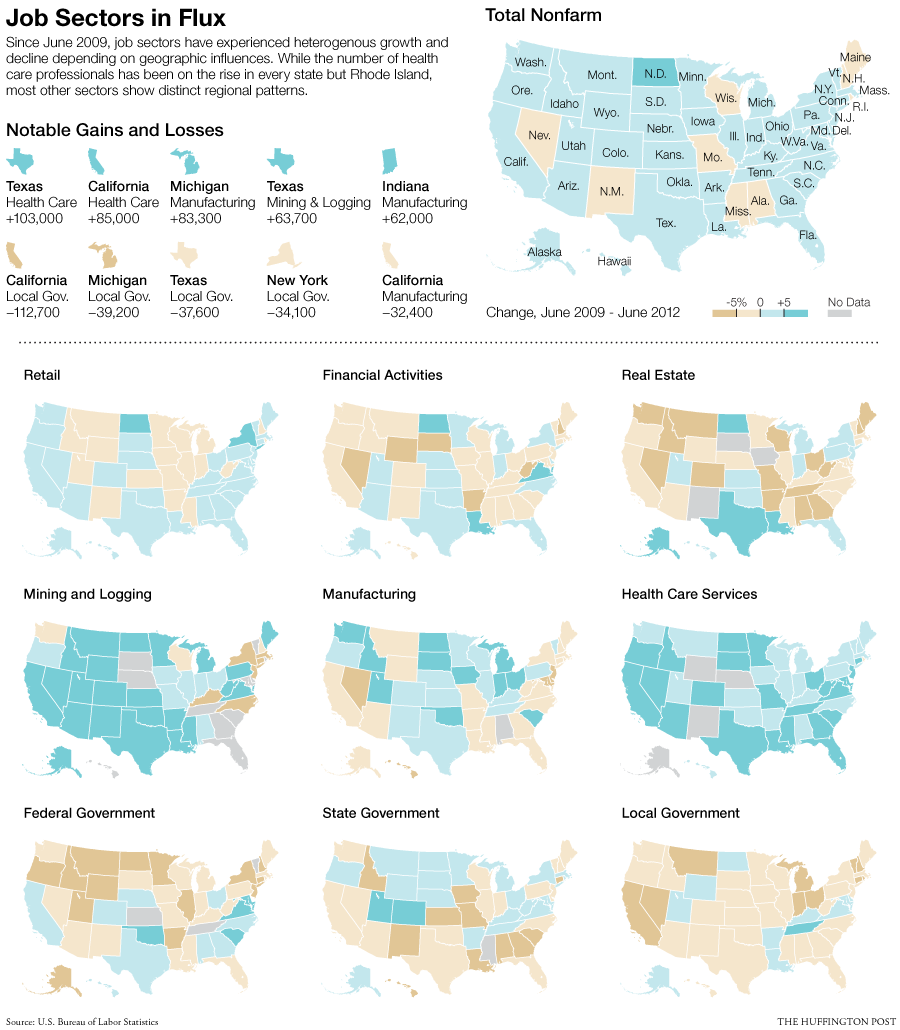 One very important thing to keep in mind: while President Obama said the September jobs report showed "we are moving forward again," there is a very real question about what kind of forward we're considering. Much of the growth, a recent report from the National Employment Law Project found, is in low-wage occupations. Waiters and waitresses, for instance, are paid miserably -- and there are 200,000 more of them since the recovery.

"This is a story of a long-term increase in inequality colliding with one of the steepest recessions on record, and it's a recession that has disproportionately hit better-paying jobs," said Annette Bernhardt, policy co-director at the NELP. "The result is that low-wage jobs are coming back the fastest, and in the labor market, job seekers are therefore being hit on two fronts: They're competing for a smaller number of jobs, and many of those jobs don't pay a living wage."

For someone who's just getting into the labor market right now, Bernhardt said, the best bet for a well-paying job in a growing sector might lie in health care.

"Better-paying industries have been lagging far behind, in particular the construction sector, the finance and real estate sector, and state and local government jobs," Bernhardt said. "If those three industries had grown at the rate of the rest of the economy, we would have seen a much more balanced recovery."