I happen to live in Los Angeles, where being over a size 8 is almost a felony. As a plus-size woman, this can be depressing when I am searching for a cute bathing suit or a stylish pair of jeans in a city that considers the "norm" a size 2. At those times, I like to remind myself that the average dress size for women across America and the UK is a size 14, and that a size 2 is much less common than the norm. However, it's disappointing to note that at size 14, those "average women" are also considered "plus-size," a term that relegates them to a category that, in this media-driven age, sends women to the back of the proverbial bus.

So, it follows that because of societal standards, no matter what we look like, women are always first to dismiss themselves from the dating game by chastising their perceived physical shortcomings. This kind of dysmorphic thinking doesn't discriminate. Women of all shapes and sizes believe they have some sort of a tangible flaw that renders them unattractive, undesirable and therefore unworthy. Though being a plus-sized woman has its challenges, dating shouldn't be one of them. In fact, as a plus-sized woman myself, I date more now than I did when I was thinner.

A few years ago, when I made the decision to start dating again after my divorce, I had to examine my relationship with how I saw my body. For my entire teen and adult life, I was lead to believe -- through the media, other women and some really immature boys -- that my body (and therefore, I) wasn't desirable, because it had more lumps, bumps and curves than the "ideal women" coveted by society. I thought about all the women this kind of conditioning affects. Most women do not have a movie star body, and some spend a fortune trying to attain it. It was interesting to me that regardless of size, all the women I knew loathed portions, if not all of their bodies. All of them. I was no different.

So, when I left my husband at age 40 and entered into a very passionate affair with a new man, I ran headfirst into a thick and impervious wall of shame and self-hatred. Though emotionally I felt that he wanted me, intellectually, I couldn't understand why. I couldn't get my head around the idea that he found me sexually attractive; after all, I wasn't built like Jennifer Aniston.

When we first became intimate, I was so ashamed of my physique that I kept my slip on, thinking, maybe he won't notice my fat. Though the voice in my head told me I was disgusting and should be ashamed to think he wants me, my lover couldn't have been more effusive and complimentary about how seduced he was by my body. But it didn't matter; the shame and the humiliation I felt from other people's opinions of how I should look took over. I recalled the stares shot surreptitiously my way when I enjoyed an ice cream cone, and the disapproving glances I received when I dared to wear a bathing suit to the beach. These memories enforced my fears. My lover continued to sincerely voice how attracted to me he was, yet I continued dismissing him, and kept that slip on for the next three months.

When I was finally able to relax enough to be naked in front of him, I wanted to understand why he wasn't disgusted by me. I brought up the subject of a woman's body type and asked him if he had always been attracted to plus-sized women.

For me, his answer was revolutionary.

My lover explained that body shape or size had nothing to do with his attraction to a woman. To him, a woman's physical appeal (among other things like; sense of humor, chemistry, intelligence, etc.) was based on how she embodied her sexuality. He said that when a woman knows she's a sensual being and is confident about her natural sexuality, it drove him wild.

I thought back to when I was praying he wouldn't notice my fat, and how it got in the way of me being in the moment and enjoying the connection and physicality we shared. His answer challenged the way I believed all people picked a sexual partner. I could no longer go back and operate under the same beliefs. I needed to redefine, for myself, what it meant for me to be a sexually desirable woman. While I needed to start the work of being able to accept my body as it is in any given moment, I also needed to learn how to accept and integrate my sexuality and sexual desire into what it meant for me to be the woman I want to be.

What I've come to believe is that a person's sexuality is part of the human experience. It exists whether we like it or not, like our eye color or the shape of our hands. We can ignore it, cover it up or make excuses for it, but we can't deny its existence. The fact that I'm fat -- yes, I said "fat," because it's an accurate adjective and not an insult -- does nothing to add or detract from my value as a person and as a woman of great worth. I am a human being first, a woman next, and after that, many, many things that have nothing to do with my physical features.

My acceptance of being a sexually desirable woman projects from me even on days where I hate the way I look. Only now have I come to know that sexual pleasure is not just meant for the "beautiful" and the "hard-bodied"; it's a natural endowment and enjoyment that is everyone's right as a human being. Thank goodness that now, in middle age, I can look forward to a happy, healthy and enjoyable sex life. 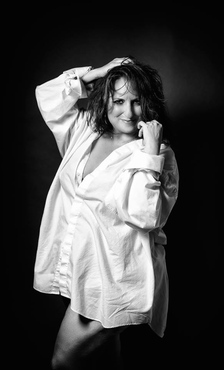