"Well, with middle-aged women, it gets easier to put it on and harder to take it off." At the ripe not-so-old age of 34, Betty (Draper) Francis is sitting in her doctor's office facing two of her worst nightmares -- she's "old" and "fat."

Last night's episode of "Mad Men" brought Betty back into the spotlight after she was noticeably left out of the season premiere. And though her storyline included a cancer scare and an almost-touching phone call with ex-husband Don, all anyone could talk about -- including Betty herself -- was her very noticeable weight gain. The opening sequence starkly contrasted Betty struggling to get into her party clothes and ultimately faking sick to get out of going to an event, with the thinner and younger Megan, who had no trouble at all getting zipped into her mod mini-dress for a meeting with Don and a Heinz executive. The aspirational Betty Draper that every fashion blogger felt compelled to write about during the show's first few seasons is officially a thing of the past. Just as Don is facing the prospect of getting older and therefore irrelevant, so too is former-model Betty.

Betty's fear of permanently losing her lithe figure is compounded by a visit from her mother-in-law, Pauline. The elder Mrs. Francis tells Betty that she has a wifely duty to lose the weight in order to keep her husband attracted to her. "Honey, I know how it happens. You get comfortable and you give up a little bit, and then it just gets out of control," Pauline, a larger woman herself, tells Betty. Then she advises her daughter-in-law, "There are things you can do about this, there are pills you can take."

Henry, Betty's politician husband, to his credit, never once shames her for her changing looks. I can't say the same for "Mad Men" viewers, many of whom appear to see Betty's weight gain as a reason in and of itself to dislike her. (Personally, I find her generally cold and selfish demeanor to be a far more compelling one.)

Viewers' reactions to seeing January Jones in a fat suit, on top of the weight she has gained from her real-life pregnancy, ranged from supportive ("@erin gee: I'm so into fat betty #madmen"), to joking ("@neitherandboth Betty doesn't have cancer (TFG!) she's just fat #whitegirlproblemsof1960") to outright disgust. Unfortunately, there was a lot of the latter:

After seeing what fat Betty Draper looks like, I kind of want to starve myself...

Betty (Draper) Francis really needs to die. Can't stand her and now that she is fat, she serves no purpose

My motivation to hit the gym today is chubby Betty Draper

Betty Draper you fat bitch. No offense to January #madmen

As Sady Doyle pointed out on Twitter, making Betty gain weight was a great way to tap into her anxieties about aging and "losing her looks," which she's so heavily traded on in the past. Julia Roberts' character in the recently released "Mirror Mirror," also grappled with these concerns, as do many women entering middle age. Unfortunately, Betty's extra pounds also awakened those anxieties -- and an explicit animosity toward overweight people -- among "Mad Men" viewers. Since the episode, two Fat Betty Francis-themed Twitter accounts that have popped up, as well as a meme that includes lines like "I got 99 problems, but one fat ex-wife."

Fat Betty Draper: Why Do We Care So Much?
Mad Men Photos 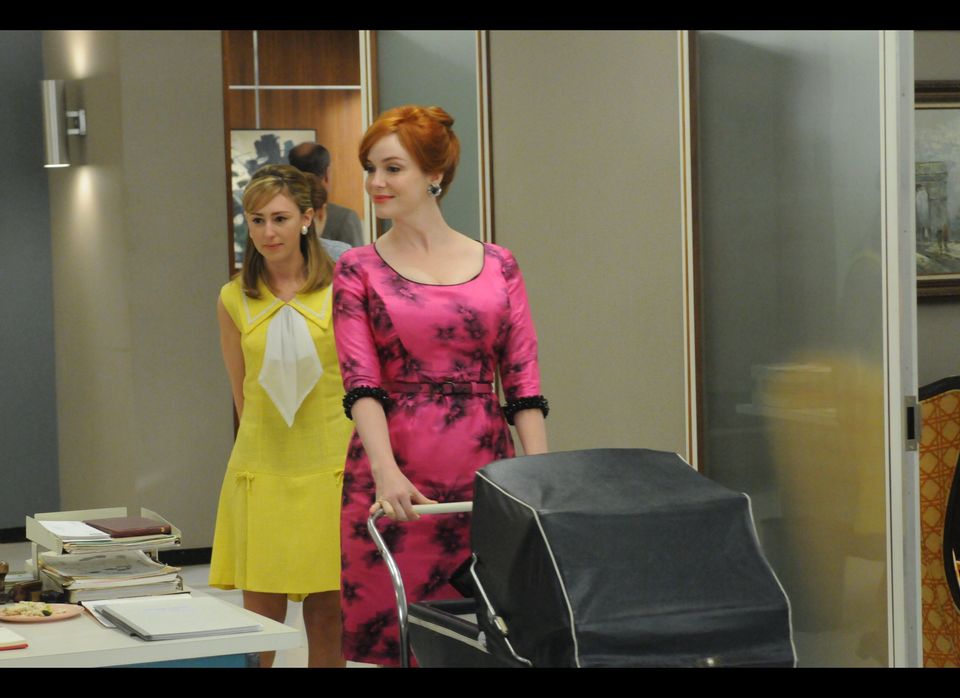