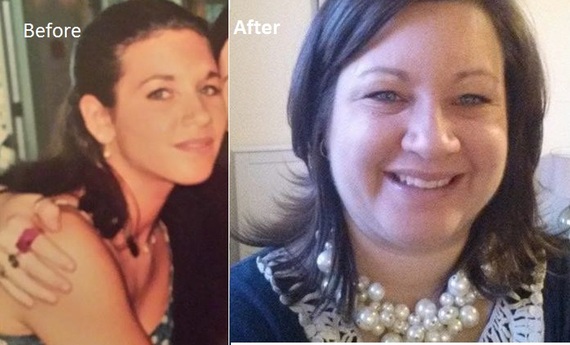 "Don't you LOVE your body? I'm so jealous of you," a classmate asked me in dance class. I smiled but didn't answer. She was one of the popular girls and she had just made my day. I think any young girl in my situation would have felt good getting that sort of compliment. But, looking back, I know that there was something extremely wrong with what she had said, and here it was: I was about 13, and I weighed the same thing that I had weighed at age 10 (70 pounds). I wasn't done growing, I had just figured out how to "diet." Quite honestly, it was not a diet, it was starvation.

Yet, becoming a teenager in the mid-90's, during the age of Kate Moss and other waif models meant that a standard of beauty had been set, and that standard was that women should not just be thin--they should look emaciated. This, along with the pressures of wanting to fit in in a community where quite frankly, "thin was in" caused me to develop a certain lens through which I would view my life; I wasn't successful or lovable if I wasn't bone-thin.

Life has a funny way of giving us the lessons that we need, however. And my lesson would come in the form of a 100 pound weight-gain in my late 20s. It happened because I was put on a medication to manage my bipolar disorder that a) didn't work, and b) caused my eating disorder to go in the other direction. Now, instead of starving to "control" my life and emotions, I was binging. It was horrible. I didn't want to leave the house, but when I did, I had to face people constantly asking me if I was pregnant. I fell into a depression so deep and dark that I contemplated suicide, and even made one thankfully unsuccessful attempt at ending my life.

Well, I conquered both the depression and bipolar as a whole. While I know I have to manage bipolar disorder for my whole life, I haven't had symptoms since the period after my weight gain. In addition to this success, I have had many others, both personally and professionally. I work at an Ivy League university, where I train mental health professionals, including psychiatrists, on how to work with young people experiencing their first "break" with mental illness. I have a Master's Degree from that very same school. I have a successful private life coaching practice. I start my PhD in mental health this coming fall. I have wonderful relationships with my family and friends.

Yet I know that if my "before" and "after" photos were placed on social media without the back story, the judgement would be something like "she really let herself go." Gaining weight in our culture, especially for women is synonymous with being lazy, unmotivated, unsuccessful, and unlovable. Yet in my case, nothing could be farther from the truth. The truth is that I have a mental illness which requires me to take medications that have a side effect of weight gain, and I have an eating disorder.

So how do we get our society to give obese people a chance, and to look beyond the physical? I think it starts from the inside. I can't change anyone's perception of me, but I certainly can change my own. My fat has a story to tell, and it's a story of a young woman fighting for her life to overcome the sometimes fatal disease of bipolar disorder. It's the story of doing whatever I could to manage overwhelmingly intense emotions, and learning how to be a successful member of society, even after some doctors told me that I didn't have a chance at recovery. The truth is, "fat-shaming" starts within. This is why I am working extra hard on learning to love myself regardless of my size.

Please don't get me wrong--this doesn't mean that I'm not committed to getting my eating disorder under control and losing weight. For my health and well-being, I am working extremely hard at this. But, I'm also committed to loving myself in the process.

I have read many stories of late about brave women and men who are speaking up about body image and fat-shaming. And I think that we need each and every one of these voices to de-stigmatize obesity. But I also think that if women and men are able to internally change the dialogue that goes in in their heads about their weight and self-worth, things will really start to change. If people universally stop believing the myth that thin equals successful and fat equals lazy and undesirable, a societal transformation will happen. Magazines that idealize being skinny or give you the next great way to lose weight won't litter our newsstands. Actors and actresses who are icons only because of their bodies and looks won't be the only ones getting parts in movies. And slowly, the pendulum will swing to a more objective and accepting way of looking at bodies.

It starts with each of us. It starts with me. So, I'm here to tell you that I'm Emily Grossman, I am 5'3," and weigh 190 pounds as of today. I love myself and I think I'm beautiful both on the outside, which is what you see, and on the inside, where it counts.