Children in a North Dakota neighborhood may be slated to get an awful surprise this Halloween: A local woman is reportedly planning to hand out "fat letters," instead of candy, to kids she thinks are "moderately obese."

Valley News Live reported a local Fargo woman called into Y-94 radio recently and revealed her plan to take on childhood obesity by handing out letters targeting trick-or-treaters whom she considers obese.

"I just want to send a message to the parents of kids that are really overweight," she told the station. "I think it's just really irresponsible of parents to send them out looking for free candy just 'cause all the other kids are doing it."

Valley News Live obtained a copy of the letter, in which the woman, who is only identified as Cheryl, writes, in part:

You [sic] child is, in my opinion, moderately obese and should not be consuming sugar and treats to the extent of some children this Halloween season. My hope is that you will step up as a parent and ration candy this Halloween and not allow your child to continue these unhealthy eating habits.

A screengrab of a copy of the "fat letter." Story continues below. 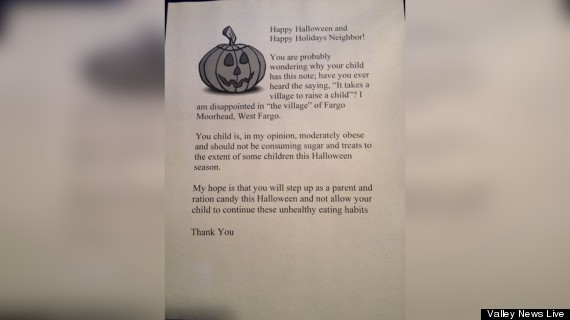 Obviously, some have taken issue with this.

"I can understand if you are that weird and concerned about kid’s weight maybe handing out boxes of raisins or bags of carrot sticks or something," wrote Eve Vawter of Mommyish. "I can see MAYBE hanging a sign on your door that reads 'I will not be handing out candy this year.' But to fat-shame little kids who come to your door trick or treating? That’s a whole other level of evil. Way to make all the kids feel like garbage, lady."

The Centers for Disease Control and Prevention (CDC) reports childhood obesity has more than doubled in the past 30 years. In 2010, more than one-third of children and adolescents in the U.S. were considered overweight or obese. The CDC acknowledges many societal sectors can influence a child's lifestyle habits and recommends combating this issue by promoting healthy eating and physical activity, while fostering a supportive environment.

"Fat-shaming" is not one of those recommendations.

The practice made headlines last year when the Strong4Life campaign and Children's Healthcare of Atlanta released a series of "Stop Childhood Obesity" ads featuring overweight children. A study published in July proved fat-shaming has adverse effects and actually increases the risk for obesity.

While this is just about one of the worst things we can think of to do to a hopeful trick-or-treater, Jezebel does raise the possibility that the whole "fat letter" thing is just a radio stunt.

We can only hope.

More:
ParentsVideoChildhood Obesity
Newsletter Sign Up
Raise the kind of person you'd like to know
Subscribe to our parenting newsletter.
Successfully Subscribed!
Realness delivered to your inbox