It's encouraging that we, as a society, are getting less and less tolerant of abusive behaviors, from domestic violence to discrimination against gays and lesbians to racial and ethnic slurs. Bullying is finally being recognized for the deeply destructive force it is. Seemingly, progress is being made toward a world where, legally and socially, it's understood that all people have a right to be respected.

Except, perhaps, those who are overweight. Sadly there are still many people who make fun of, shame or otherwise mistreat others who weigh more than they do. Somehow, discrimination against people who are obese remains socially acceptable. But it shouldn't be -- it's hurtful and, more to the point, quite harmful.

In a recent study, a group of obese women were asked to keep a daily journal recording instances where others made them feel bad about themselves. It was all too common for women in the study to report experiencing insults and humiliations every day. Imagine -- every day. They were shamed by strangers as well as colleagues, friends, family members and loved ones. (1)

Another study examined jokes about obesity. Have you heard some funny ones? Then consider this -- the researchers found that people who find them humorous are also more likely to discriminate against obesity -- to not hire an overweight person, for instance, or to exclude an overweight friend or acquaintance from social gatherings. (2) 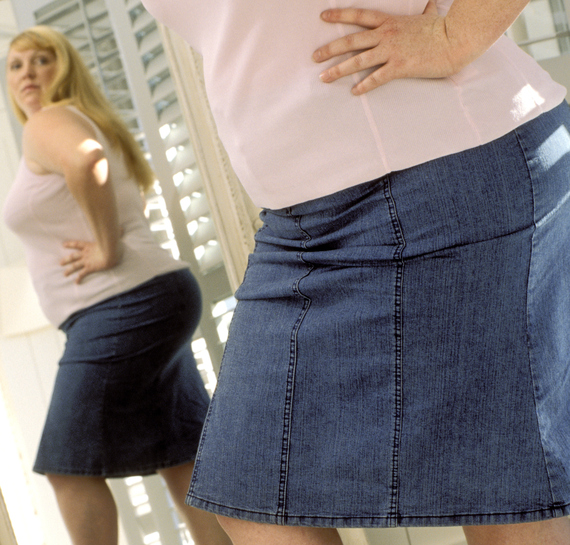 Isn't it time that we stopped being okay with this? Just like people now often speak up when someone says something demeaning about a person of a different skin color, gender (or gender preference or identity), religion and so on, we need to start calling people out for making remarks about people's weight. Don't allow people around you to make fun of, judge, make assumptions about, withhold opportunities from, and otherwise stigmatize people whose weight doesn't match your vision of what it should be.

If you're about to argue that this particular type of discrimination is different because being overweight or obese is a sign of poor character -- of sloth or laziness or gluttony, for instance -- then you need to know that this is simply not the case. Research shows that food addiction is as real as drug and alcohol addiction -- for example, a Harvard study demonstrated that when people with food addiction eat high-glycemic foods (which is what highly processed, rapidly digested foods are), their brains react exactly the same way as when substance abusers drink or take drugs. (3) For them, eating activates the region of the brain that is associated with rewards and cravings but, of course, those with food addiction can't just not eat. Instead they have to change their relationship with food. Picture an alcoholic who must have beer or vodka to survive, but only a bit. Even those of us who've tried to lose a few pounds but don't actually have an addiction to food can attest -- it's very, very difficult to do.

Yes, food choices and exercise habits are relevant to obesity and must be recognized and addressed -- but those are only two of the many factors that influence our weight. Many others are both indirect and, I think you'll agree, surprising. For instance, here are three research-verified examples of risk factors for obesity that are absolutely out of an individual's control:

1. Where your mother lived when you were conceived and born. Men and women born during the 1940s famine in the Netherlands are more likely to be obese as adults -- and so are their children. Scientists point to this as evidence that "epigenetic factors" (genetic changes influenced by the environment) can be passed from one generation to the next. (4)

2. Things that happened while your mother was pregnant. Children whose mothers experienced great stress (like bereavement) in pregnancy are more likely to become obese and women who are exposed to certain types of air pollution while pregnant also give birth to children at higher risk for being obese. (5, 6)

3. Food and drink containers. Drinking from plastic bottles or eating canned foods can also raise the odds you'll become overweight or obese. The higher levels of BPA (a manufactured chemical found in many consumer products, including plastics and the linings of cans) in a person's urine, the greater likelihood that he or she is overweight or obese. (7)

There are many other factors to list, but it shouldn't be necessary. Fat-shaming is wrong and if you do it or allow someone to do it in your presence, it says a lot more about you than the person you are judging. It would seem that our relationships to both food and our bodies is far more complicated than it needs to be. Health and happiness for all should be the goal. Yes, being overweight can be harmful to a person's health whatever the cause, though it is also possible to be overweight and quite fit in many cases. But let's continue to learn all we can about how to help ourselves and others get and stay healthy by being positive, supportive and non-judgmental.