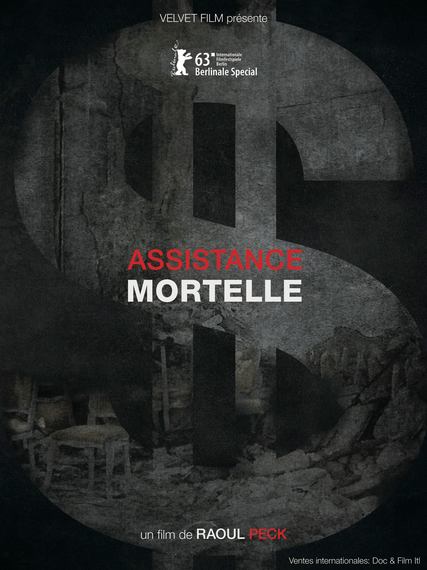 With unintentional understated irony, senior housing advisor Priscilla Phelps of Bill Clinton's Interim Haiti Recovery Commission (IHRC) becomes the conscience of Haitian filmmaker Raoul Peck's Fatal Assistance (Assistance Mortelle), which opened Friday at the Lincoln Center for a one-week run before moving on to Miami and other cities. Peck meticulously revisits the timeline, from the first seconds of the monstrous Jan. 12, 2010 earthquake through almost three years of "recovery" efforts by the international community.

Fatal Assistance opens and closes with frightening footage of a man and a woman caught on security cameras during the initial moments of the quake. The man runs for his life as structures implode around him in a burst of dust and debris. He disappears off-camera and we do not learn his fate.

The woman, running into an open courtyard, literally falls to the ground and embraces the earth. Both are Haiti, running for its collective life and having no hope of rescue, dependent completely upon the population's bond with an island that has been it's only hope and sustenance since the days of slavery.

Fatal Assistance ably demonstrates the folly and damage caused by swarms of NGO's and Hollywood do-gooders that completely ignored the root causes of Haiti's problems pre and post earthquake. The immoral transformation of a floodplain into a showcase of IDP housing named Camp Corail-Cesselesse is the centerpiece in a cautionary tale of NGO incompetence. This flagship camp is the ship that sank the optimism of Phelps, who calls for a "mea culpa from the international community" after viewing the 107 one-room square foot plywood shacks with no water or sanitary facilities, let alone kitchen facilities, that now serve as exemplary housing for the third world.

Americans would not consider Camp Corail fit for livestock in the first world. Corail was originally organized for about 5,000 people evacuated from the Pétion-ville Club, run by actor Sean Penn. It now houses over 10,000 and has been completely abandoned by the aid agencies.

(For more background on Corail and adjacent camps Canaan and Jerusalem, see the series offered by Haiti Grassroots Watch).

Peck offers an ambitious film. The Clintons, and Hollywood in the personas of Sean Penn, Angelina Jolie, and George Clooney are all implicated in the myopia of reconstruction. Thankfully, the film avoids showing bodies falling out of dump trucks and front end loaders as they were moved to a mass burial ground, but hundreds of wooden crosses pounded into the rocky burial site serve as stand-ins and silent sentinels to malfeasance. The location is an almost unnoticeable spot on the maps called Lafiteau. It is also the site of mass graves filled with the bodies of victims of the Duvalier regime.

This is a very difficult film to critique, in large part because all of the sites and sounds are familiar and stir deep emotion.

The film stumbles when it veers from its laser focus on the billions of dollars that were promised, never materialized, or were completely wasted, and the narrative raises more questions than it answers. The fraudulent elections of 2012-2013 are introduced but not fully examined, as is the attempted coup to fly retiring President Rene Préval out of the country. United Nations' Edmond Mulet denies he was instrumental in the failed coup, but we now know from OAS representative Ricardo Seitenfus that Mulet, Haitian Prime Minister Jean-Max Bellerive, and US Ambassador Ken Merten were behind the effort to oust Préval during the election cycle.

Most troubling was the use of Bellerive as a primary narrator in the film. Serving as Bill Clinton's co-chair of the HIRC, Bellerive would be a logical choice to discuss reconstruction, but the veracity of his commentary must be scrutinized given his behind the scenes machinations. Bellerive and Clinton were obligated to oversee the spending of billions of dollars of international assistance that never fully materialized.

The introduction of cholera into the water systems by the United Nations is not mentioned at all and should have been, since its speaks directly to international cover-ups, denials and the lack of focus on providing much-needed infrastructure in Haiti. Cholera is the poster-child of development failure in what Peck's narrative terms the parallel world of the "humanitarian bubble."

Past President Préval asks the seminal question. "Why fly bottled water" to Haiti at tremendous costs when Haiti can bottle its own water?

One of the most embarrassing moments in the film is a meeting between Préval and an executive from Coca Cola. Préval was at the UN and a donors conference to discuss the whereabouts of promised aid monies that had not materialized. In the meeting with Coke, Préval is treated like a child, glad-handed, and dismissed by a literal wave of the hand by the executive who wants to use Haitian mangoes as a humanitarian project.

How one views Fatal Assistance, depends upon prior knowledge the viewer brings to the film. For the casual observer of Haiti, Peck offers a kaleidoscope of what went wrong. It is obvious that Clinton's IHRC missed the boat and operated in a vacuum with no institutional memory of what it means to be Haitian. Meeting after meeting ends with a failure of leadership and a staff that does little more than "stir air."

Those steeped in Haitian minutiae post quake will hunger for more. I really wanted to like this film. In some ways I did, but we need more scrutiny. It is unfair to ask Peck to offer solutions in 99 minutes, and it is obvious he tried to take the middle ground in this film.

Perhaps the best outcome would be that Fatal Assistance spurs more soul-searching from the international community. We are literally killing Haiti with our misguided aid efforts and lack of trust in Haitians to manage their destiny.

Someone needs to take a closer look at the stolen elections, and cholera needs to be front and center in present and future discussions.

One film cannot possibly save Haiti.

Fatal Assistance originally screened at the 2013 Human Rights Watch Film Festival. Peck was the recipient of the Irene Diamond Award presented by Human Rights Watch, for his body of work. He is now Chairman of the Board of the film school La Fémis in France.

The film screens March 20 at O Cinema Miami Shores, Florida. Check for updates and future screenings on the Facebook Page.

Recommended with a few caveats, especially the veracity of Jean-Max Bellerive as a secondary narrator.