When most 20-somethings have dating questions, they call a single friend. A few might call their moms. But what if your "person" is a 60+ guy who also happens to be your dad?

When I first moved to New York, I was that girl who checked in with Mom back at home most nights; she was hilarious and witty and always interested in my day. Plus, she had stage IV cancer, and therefore a lot of mother-daughter wisdom to impart. Those calls were among the most open of my life. With time against us, we were oddly free with our stories and advice.

The phone calls stopped a few weeks after my 23rd birthday, when my mother died of breast cancer at the age of 56. She left behind two daughters... and her husband of more than 30 years.

For a while, neither Dad nor I felt much like picking up the phone.

Then, two years after we lost Mom, I was home for Christmas and saw Match.com installed on Dad's phone.

That conversation was among the least open of my life.

A few days later, though, I caught him sitting in the living room, laughing at something on his iPad.

Seriously? What is it?

You have to see this pic.

Dear reader, it was not pretty. While I was not prepared for this dark glimpse into online dating profile pics for the 60+ set (let's just say there were some, uh, questionable props involved), a strange question formed in my brain:

A beer (or three) later, we had revamped his profile pictures (puppy photo, yes; woman with her arm around you in profile pic; no) and "about me" section (yes, Dad, using the wrong "their" is a deal breaker at any age). I returned from Christmas break feeling like I had helped Dad get closer to moving on with his life... and with the realization that I needed to reexamine certain parts of mine.

Slowly, Dad began calling me with online dating updates. At first, I was appalled. Then, fascinated. Then -- horror of horrors -- I found myself calling him for advice. When I got over the initial mental terror, I realized he was kind of perfect for the job:

Not every man I go out with gets the Dad treatment (and because I know you're thinking it, no, my sex life is off-limits). But here's the thing: My dad found the love of his life, lost her, and was able to put himself out there again after 30 years, a good deal of pain and allow himself to love again. Here are seven things my father taught me about love:

1. Be friends first.
My parents met on a blind date arranged by friends. Dad said when he saw Mom, his jaw dropped. The attraction was instantaneous, mutual... and then the blizzard of '78 happened, blanketing the highways that ran from Mom's home in upstate New York to Dad's outside of Boston in snow. Since they couldn't see each other, they wrote letters. In them, they offered one another support; Mom encouraged Dad's fledging career as a public defender, and Dad was a shoulder to lean on during Mom's search for her brother, who went missing during the Vietnam War.

I met one former boyfriend through mutual friends. The attraction was instantaneous, mutual... and so we jumped right over the friend zone and into exclusivity. Five months later, I realized that while my heart still beat faster every time I looked at him, there were certain topics I'd stopped bringing up around him -- namely, things about my family and feelings -- because he didn't share those parts of his life with me.

"So much of a relationship is mental," Dad told me. "You need someone to keep you positive, who believes that what you do and care about in life is good."

Pick someone you can talk to after a hard day or a happy day. Someone who supports you, no matter what.

2. It's OK to take your time -- the good ones are worth the wait.
Grief is complicated. We had both lost someone we loved, and anyone we'd welcome into our lives was going to have to be OK with taking it slow.

Against the advice of my father (and many friends), I rushed into a new relationship shortly after a long-term one ended, and not long after losing Mom. Spoiler alert: It didn't last.

Dad told a woman he liked he wasn't ready to settle down yet, and the craziest thing happened... she gave him space. They're still together and really, really happy. The time apart let them both realize what they meant to each other and showed them that they could be happy alone -- a crucial first step toward being happy with someone else.

3. Pick someone who makes you laugh.
Let me tell you something: Chemo sucks. But even on her darkest days, Mom would crack jokes about how odd it was that her orthopedist was named Dr. Wack and her dentist Dr. Payne (now THAT is wack).

Given where I came from [see: above], I'm a bit of a sucker for bad puns. If you aren't willing to be silly with me in good times, what's going to keep us going when life gets less fun?

As Dad would say, think of those sleepover parties you had as a kid: Some nights you want to stay up late playing games, but most of the time you just want to laugh and talk until you fall asleep. Now, imagine you could only invite one friend over for a sleepover for the rest of your life. You better pick someone who can make you laugh. 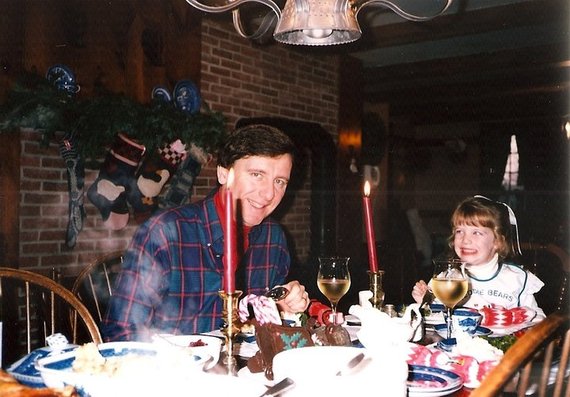 4. Make sure he/she loves you, not just the idea of you.
My dad was hesitant to list his profession as "attorney" on his online dating profile. He said women would contact him and he'd always wonder if they were attracted to him because his job title suggested success or wealth. He wanted to be loved for who he was (a rockin' Dad who also happens to be in a rock band), not the job he held.

I once dated someone who had just gotten out of a long-term relationship and was looking for someone who was "wife material." On paper, I fit everything he was looking for: Ivy League degree, solid job... and blonde hair and blue eyes, just like his ex. He was handsome, successful and charming; I liked saying I was his girlfriend. But when we were alone, we'd have these awful fights where I realized we had very different views on very basic things... like what it means to be in a relationship. We looked good together on paper (and, after some Instagram filtering, I'd argue, in photos), but we weren't good together in real life.

Make sure you are dating a person, not "the person you are supposed to be with."

5. How do they treat you when disaster strikes?
My dad and mom shared a bed for more than 30 years. They made me in it when they were young (ew), they let their two daughters crawl in and watch TV with them in it when they were a bit older, and it became the place my dad would carry my mom to after trips to and from the bathroom after multiple cancer-related surgeries that robbed her of her femur, breast, lymph nodes and dignity.

When Mom died, my boyfriend at the time rushed from New York to Boston and spent his birthday in a funeral home at her viewing. While the relationship didn't work out in the long run, he's still a trusted friend today.

The good ones don't run away when it's hard; they stand by your side and carry you, if necessary.

6. Sometimes (but not always), wisdom comes with age.
I recently dated someone who was... well, let's just say he was significantly younger than I am. My dad offered me the following advice: "At his age, I was dating my college girlfriend. She was great, but I wasn't ready to get married or be serious, so I ended it. Then I met your mother, and everything clicked."

Sometimes, you just aren't at the right stage of your life to be the partner someone else needs. And letting them go means they'll eventually find that right person... which -- bonus -- can lead to some awesome kids.

7. Know when to let go.
"You can go." My dad whispered that to Mom minutes before she stopped breathing, her organs giving out after a three-year battle with inflammatory breast cancer. He wasn't ready. It hurt. But she was in pain and he loved her enough to let her go.

My longest relationship lasted seven years. My ex-boyfriend is a kind, accomplished man, but we weren't right for each other. Since we spent most of our 20s together -- in many ways, grew up together -- the separation was difficult, but we cared enough about each other to want the other person to be happy, and realized the best way to do that was to part ways.

Hard stuff, but if my dad can do it, so can his daughter.

Dating can be exhilarating, and it can be demoralizing. But I have a pretty good role model to remind me that no matter how bad or boring the date, the good guys are out there... somewhere.