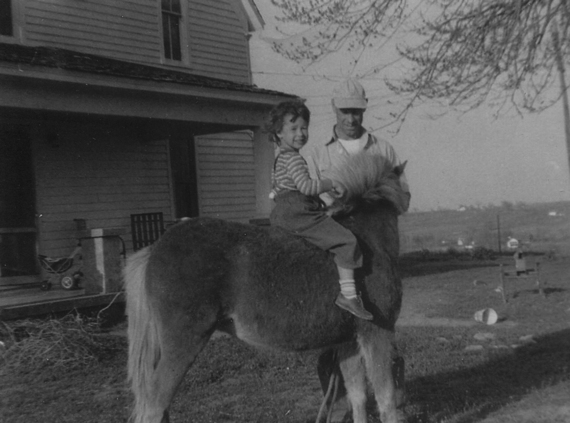 In 1972, just before I turned 21, my father, a pilot for TWA, invited me to accompany him on his new international route. Having just embarked on a new life in the wake of my turbulent upbringing in an alcoholic household, I was reluctant to risk my newfound stability. "It's your last chance before you lose your free passes," Joe pleaded. At last, betting on his "no drinking on the job" rule, I agreed to one last father-daughter adventure.

As it turned out, I made the right decision. Not just because of the places I visited -- among them Mumbai, Hong Kong and Jerusalem -- but because of the opportunity to see my father at work. Because my father's job was literally "up in the air," most of what I'd seen of him in the years before I left home had been his tottering back retreating into his bedroom. But from the moment we took off from the Kansas City airport, I was drawn into Joe's aviation world of weather conditions, airplanes and airports in distant places.

After the seat belt sign flashed off, the hostess with her signature TWA red lipstick led me up the aisle. Poking my head into the cockpit, my father swiveled around proudly from his position behind the panel of knobs, levers, and gauges. His TWA hat pushed back, he greeted me with a jaunty smile. Momentarily turning their heads, the captain and co-pilot nodded hello. I'd be traveling with the same crew the whole way, and they were all in on Joe's father-daughter bonding adventure. "Can't believe you'd want to come on board with Joe Carroll at the controls!" they joked. The camaraderie continued, and by the end of the trip, an unexpected sensation of joy warmed me from within. It was a feeling I hadn't associated with my father since girlhood.

Only years later, working on a memoir about my father's American life, did I realize just how important that father-daughter journey had been. Observing my father in his work environment, I could be rightfully proud of Joe's skills as an airman. I could respect the discipline, concentration, and attention to detail required of his craft. I could admire his ability to work within a team in a small cabin to keep a plane of passengers safe and aloft through good and bad weather. I could emulate his devotion to his chosen profession. Most important, I could treasure the normalcy of the quiet, focused, undramatic way he went about his job -- so different a man from the father I saw at home.

I could even begin to claim those qualities as my own. Especially for women of my baby boomer generation and earlier, fathers traditionally represented mastery in the outside world. For most of those fathers, it was to their sons that they passed the torch of their worldly power. I well remember my father opining against those working women who "stole" jobs away from men.

I also vividly remember my father confronting me whenever I dared express my own power. "Who do you think you are?" he said to me in one charged scene, after I'd confronted him over smacking my little brother in the face. Lowering his face to meet mine, his eyes narrowed into steel slits, Joe's words spit out at me like bullets. Reduced to quivering fear before the sheer force of his physical strength, I turned and ran to my bedroom. Who, indeed, did I think I was?

My father's words, falling as they did onto my young psyche, never really left me. Even today, when confronted by a situation that demands I stand up for myself, they rise up to haunt me. Indeed, as psychologists tell us, and as I learned during my own long hours of therapy, we are internally constituted of our two parents. And when a father neglects or even smashes in his daughter those critical qualities of agency and authority, those girls are at risk for growing up into women who lack the personal power to defend themselves, or to claim their dreams and the life they want.

"This is not about gender. It's not specific to men or women," explains Jungian analyst Michael Conforti. "Many women have played the father role for their children. But when you find somebody who doesn't have a sense of how to enter the world in a meaningful way, or how to bring their gifts to bear fruit, you can usually pinpoint that to an afflicted father-relationship."

As psychoanalyst Jessica Benjamin points out in The Bonds of Love: Psychoanalysis, Feminism, and the Problem of Domination, biological sameness can make it easier for fathers to instill these qualities in their sons. By saying "yes, you are like me," writes Benjamin, the father ignites his son's ambition, imbuing him with a sense of agency in the world. For daughters, however, this process is more complicated. Because men -- particularly of my father's generation -- had to achieve their masculinity by dis-identifying with their mothers and women in general, it was harder for a father to see himself in his daughter. Deprived of this early affirmation, girls grew up to become women who not only were unable to reach for the goals they dreamed of achieving, they lacked even the desire to feel what it is they wanted in the first place. Clinicians today, writes Benjamin, recognize the need for girls to be able to identify with their father as a vehicle for being able to individuate. Girls, she says, should get what boys ideally get from their fathers. Likewise, boys should get it from their mothers, too.

For me, the work of forging an authentic inner authority began with reaching back into my past, re-constructing both the bad and the good of my father's life and our relationship. Retrieving the warm memory of him on the job and our trip helped to expand the contracted images I'd formed of the man who'd so callously ruled over our family into a more complex person with a genuinely interesting, sober, sane, and professional side. This paternal figure was someone I could even begin to incorporate as a role model in my own working life as a writer, staying grounded while flying high in the world of ideas.

It also helped me to achieve the psychologically healthy task of integrating the wildly conflicting sides of my father into what psychologists call a "whole object." This opened the door for other, more positive memories: How, at a young age, for example, my father taught me to overcome my fear and catch and ride my own horse. Or those precious times in later life when, as a young mother struggling to write and get published, he finally accepted what to him was a strange and unworldly calling, exhorting me to hang in and "show 'em!" what I could do.

No more inspiring example exists of a father's role in forging his daughter's personal empowerment than that of the young Pakistani activist for girls' education, Malala, and her father Ziauddin Yousafzai. Together with public father-daughter duos like the Yousafzais and the huge cultural gains women have made over the past four decades, my personal inner work, I hope, will carry forward. Even now, as I watch my son with my small granddaughter -- see him patiently teach her how to stand on her feet and reach for things with her own hands -- I see a new, more positive family story around women and power taking shape.

Pythia Peay is the author of the forthcoming "American Icarus: A Memoir of Father and Country" and "America on the Couch: Psychological Perspectives on American Politics and Culture" (Lantern Books).

Pythia Peay is a journalist and author on the American psyche.