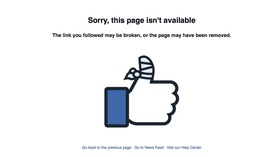 Back in the 20th Century, Bell Telephone was often referred to as Ma Bell because, in the words of Urban Dictionary, it was "the entire national telephone network." It's true. Many people can recall a time when Ma Bell was the only telephone service in the country. Lily Tomlin's career got a big lift with her snarky telephone operator character named Ernestine who captured completely the arrogance of the telephone behemoth with lines such as, "We're the phone company. We don't care; we don't have to."

Well, there may be a new character out there for an aspiring comic. This one could have a field day with Facebook's growing reputation for arbitrary censorship. Huffington Post has already published a couple dozen articles on the topic over the past five years. Father Facebook has deleted photographs from pages devoted to breast cancer research and advocacy because, you guessed it, the photographs were of breasts. Photographs of some of the world's great art works have been censored because they show nude forms.

Mary's Medicinals is headquartered in Denver, Colorado and makes nutraceutical products from cannabis. Despite the continuing federal ban on cannabis, it is legal for medical purposes in Colorado and at least 22 other states (some claim the number is 40 by including CBD-only laws). There are four states, including Colorado, which have legal adult-use-only cannabis sales. Mary's has been in business for three years and is best known for its transdermal cannabis patch.

Like every business entity these days, Mary's Medicinals had a Facebook page that was first launched in 2013. It had 20,000 followers and many reviews of its products. All of that was obliterated in late January when Facebook pulled the plug on Mary's page leaving its community of medical cannabis users in the dark.

Facebook always clings to the high ground when it takes these actions, citing its "Community Standards" where they declare, "Our mission is to give people the power to share and make the world open and connected." It then goes on to list four broad topics which have numerous sub-topic links to drill down into the crux of the policy. These topics include things such as: Bullying and Harassment, Sexual Violence and Exploitation, Hate Speech, and, of course, Nudity.

It would seem that Mary's Medicinals falls under the "Regulated Goods" sub-topic which states: "We prohibit any attempts by unauthorized dealers to purchase, sell, or trade prescription drugs, marijuana, or firearms." Except that Mary's wasn't selling anything on Facebook. The site was strictly informational. Of course their products were featured but Mary's Medicinals is NOT the only legal cannabis company on Facebook that features their product. (And, by the way, type in "Guns for sale" in Father Facebook's search bar and you might find, as this author did, that more than 80,000 people were "talking" about those regulated goods.)

The action against Mary's Medicinals appears to be totally arbitrary and capricious. In the email to Mary's announcing the removal of its page, Facebook states, "We remove any promotion or encouragement of drug use." Yet Merck Pharmaceuticals (with 36k followers) and Pfizer Pharmaceuticals (with 196k followers), among other drug companies, seem to be immune to Father Facebook's interpretive idea of "promotion or encouragement of drug use."

Graham Sorkin, Mary's director of business development, is understandably livid about the actions of Father Facebook. In an open letter to the social media giant Sorkin wrote, "It is unfortunate that you choose to align with decades of racist, regressive policies and ban (with HIGHLY selectively enforcement) any information about 'marijuana.'"

Sorkin feels the real culprit in this case may be the underhanded action of a competitor. He told Ganjapreneur, "There are thousands of other product manufacturers not being shut down. It just takes one competitor to report your page."

If it is true, if just one voice can shut down a page that was servicing a medical cannabis community of 20,000 followers, then Facebook has indeed moved to the level of Ma Bell's arrogance, captured so brilliantly by Lily Tomlin's "Ernestine." The snorting phone operator could paraphrase one of her classic lines to fit this situation, "You're dealing with Facebook, Mr. Sorkin. We are not bound by city, state, or federal regulations. We are omnipotent," followed, of course, by a wicked chortle.