On June 29th, I became the father of a beautiful baby girl. And like many of my fellow new daddies, when I saw my daughter suckling contentedly at my wife's swollen, life-nurturing bosom, I thought, I want to get in on that action, too. But warm milk on its own, even coming from the nipples of my betrothed, leaves a little something to be desired in the taste department for me if not for the baby.

My over-achieving spouse produces far more than the 30 or so ounces a day our baby requires. To prevent her breasts from becoming engorged and painful, she pumps out any excess into small plastic baggies designed for just such an activity. I don't know exactly how much milk she makes each day, but those baggies have filled both our freezer AND my in-laws' freezer, leaving room for nary a container of ice cream or a microwave pizza. The milk comes in handy; I'm a stay-at-home dad, and while I love my little girl very much, one thing I can't do for her is lactate. But the more she drinks, the more my wife seems to make. And the freezer fills up a little further.

In retrospect, it was only a matter of time before the proverbial light bulb lit up. It happened one day while I was hunting for a veggie burger amidst all the baggies. Why not put breast milk in cocktails? Mother's milk has been used, in at least one notorious case, to make cheese, but never, as far as I know, as a mixer. If this topic makes you somewhat squeamish, remember that we drink milk that comes out of the udders of cows every day. We eat cheese made from the milk of sheep and goats. God knows what chemicals are pumped into these poor animals. And you're going to tell me that a cocktail made with milk from the hooters of my wife -- an extremely attractive woman, empirically speaking -- is more revolting than that? As far as I'm concerned, if it's good enough for my baby girl, then it's good enough for me. And if it's got some booze and ice in there, all the better.

Mother's milk, or at least my wife's milk, since I haven't had the opportunity to try anyone else's, is slightly sweeter than your regular pasteurized cow's milk, and it's also got a very slight malty, yeasty edge to it. With that in mind, I started searching the Internet and my cocktail books for some noteworthy milky recipes. I immediately discounted the Breast Milk cocktail (you can find the recipe in less discerning bar books) on the grounds that it uses butterscotch schnapps. Thanks, but I'm not in high school or at a bar in a suburban chain restaurant.

There aren't a ton of milk-based cocktails, but there are some darned good ones. Perhaps the best known is the White Russian, a drink that gained iconic status in the film The Big Lebowski. There are a bunch of different recipes for the drink; for a baseline, I used one I found in a Big Lebowski fan site, and then tweaked it a bit to allow for the difference in flavor and texture between cream, which is normally used, and milk.

The Boob Abides, as I dubbed it, goes a little something like this: 2 parts vodka (I used Russian Standard), 1 part each Kahlua and milk. I threw in a little extra milk to make it thicker, and a little extra vodka to give it more bite and cut the sweetness of the boob milk. I actually preferred the missus' milk over cream, which I find a little on the heavy side, not to mention the extra filmy residue it leaves on your tongue.

A good chunk of the milk cocktail recipes I found were punches, and they all hew to the same basic recipe: vanilla extract, sugar, nutmeg, milk, ice and the spirit of your choosing. I tried a bunch of 'em -- in the name of research, of course -- and here are two of my favorites. 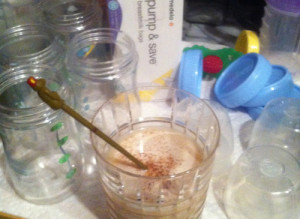 The "Taking Brandy From A Baby" Milk Punch is adapted from a recipe gleaned from the legendary cocktail historian David Wondrich. I used 2 ounces of brandy (Curvoisier), 1 ounce aged rum (Zaya Gran Reserva 12 Year), and 1/2 tablespoon of Scrappy's gomme syrup, and plenty of shaved ice. The recipe says to "top off" with milk, a rather vague instruction. I added a couple of ounces, sprinkled a pinch of grated nutmeg on top, and hoped for the best. The result was eye-poppingly strong, with the brandy dominating, but the rum added a little sweet edge and mixed well with the nutmeg. The milk was very creamy thanks to being shaken vigorously with the shaved ice, but in retrospect I probably should have added a little more. Instead, I poured in a little more simple syrup and... voila, everything was in harmony. Except for me. That drink knocked me on my ass!

Somewhat more tame was the bourbon variation on the milk punch, or as I like to call it, the Bourbon & Bosom Milk Punch. The recipe called for 2 ounces of bourbon (I used Four Roses), 1/4 teaspoon vanilla extract, 1/2 teaspoon honey, and 1/2 teaspoon grated nutmeg, along with 4 ounces of milk. Actually, the recipe uses half and half, which surprised me, because when shaken, the breast milk was nice and creamy -- I think it would be too thick otherwise. The libation was much drier than I thought it would be, and the honey gave it a nice tang that sugar or simple syrup wouldn't. My beloved's milk reminded me a little of Carnation powdered milk in this context, with a slight malty aftertaste to go along with that soy milk sweetness.

I also decided to come up with an original breast milk cocktail. Now, normally, when you say the word "cocktail" to spirits publicists, they'll brainstorm with you for days, call every craft bartender they know, and generally do whatever it takes to get you to use their brand in your drink. Not so in this case. All the PR folks I spoke with said, "Hey, great idea! But don't use my brands -- I like my job too much." All except one, that is. He gave me the germ for what I've elegantly dubbed the Medela Tequila Punch (Medela being the brand of my wife's breast pump). I salute you, my brother. Here's the recipe:

This one is complex and lovely -- the tequila hits you right up front but then segues quickly into the coffee/chocolate/cinnamon combo. I wasn't sure how tequila was going to combine with milk, and a drier blanco probably wouldn't have worked well. But Inocente is on the sweet side (in a good, non-cloying way), so it complements the sweetness of the milk. This drink is so good, in fact, that I'm already dreading having to wean the baby -- which means my milk supply drying up -- even though it won't happen for several months, if not longer.

In the meantime, however, a toast. To my daughter, who lets me share what's rightfully hers. To my wife, whose understanding and sense of humor are bottomless -- she now tells me before she goes to bed, "If you're making cocktails, I left six ounces in the fridge for you." And to the delicious drinks they've both inspired. Thanks for the mammaries!