By now you've likely heard the story of how this past Saturday morning, at Saint John Neumann Catholic Church in Maryland, Barbara Johnson was denied holy communion by the priest officiating at the funeral of her beloved mother.

At the crucial, deeply personal moment in the Mass when Barbara, a life-long Catholic, expected Father Marcel Guarnizo to utter "the body of Christ" as he offered her the communal host, Fr. Marcel instead covered with his hand the communal bowl, and offered Barbara a quick lecture on why she is an abomination before God.

"I cannot give you communion," he said, "because you live with a woman. And that is a sin according to the church."

Fr. Marcel was made aware that Barbara is gay when she and her partner of 19 years met with him that morning well before the service began. It was his ecclesiastic responsibility at that meeting offer to take Barbara's confession and then grant her absolution; this would have allowed him to then in good conscience offer her communion later. And Barbara would have certainly been pleased to do a confession with Fr. Guarnizo.

"Obviously, I don't think being gay is a sin," she told me. "But this wasn't about me. This was about about my wonderful mother having the beautiful funeral that she deserved. So yes, I would have let Father Marcel grant me absolution."

But Fr. Marcel failed to offer Barbara that rite.

Then he denied Barbara communion.

Then, at the moment Barbara began delivering her mother's eulogy, he made a point of rising from his seat and walking off the alter.

Then, after the funeral service, Father Knows Worst hid in his chambers, and after 15 minutes sent out word that he would not be accompanying the grieving party to the cemetery, leaving no one to properly bury Barbara's mother, a life-long devout Catholic.

Yikes, man. Could this guy be more of a disaster?

I spoke with Barbara on the phone the day before this story hit. She is an intelligent, kind, sensitive woman. She was extremely close to her mother, who fully accepted and loved Barbara's partner as if she were another daughter.

Barbara and her brothers, all raised deeply Catholic, are still reeling by what Fr. Marcel did at the funeral.

And the Internet, of course, was on this story like Brylcreem on the head of Fr. Guarnizo: 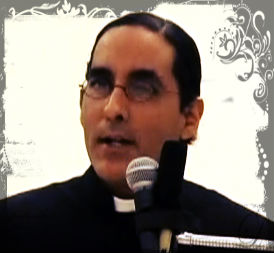 The story of what happened at the funeral of Mrs. Johnson is tailor-made for people eager to prove that religion or Catholicism is evil. It's like a 10-pound steak thrown into a dog pound.

And if you know me, you know I don't exactly have a problem with denouncing aspects of religion and/or theology that in any way promulgate the condemnation of LGBT people. If the steak is right, I'm happy to belly right up with the other dogs.

But there's meat on this steak upon which so far no one's been chewing. (Wow. Best metaphor ever!) And that meat is this: While there's no question that Father No Communion For You! picked a spectacularly horrendous time to bare his bigoted fangs, he is also the sole villainous Catholic in a story starring a great many Catholic heroes.

Yes, Fr. Guarnizo essentially shunned Barbara. But directly following the service (and to a necessarily lesser degree during the service), Barbara was also surrounded and hugged by fellow Catholics who made a point of telling her that Fr. Marcel in no way represented the love of the Church.

Yes, Fr. Guarnizo shamelessly refused to go to the cemetery. But immediately thereupon the funeral director ("an angel," says Barbara) comforted Barbara with assurances that he would quickly secure a priest to perform the burial. He then turned to Fr. Peter Sweeney, who wasted no time at all stepping right out of his retirement, and right into the Johnson funeral service.

"Father Sweeney was perfect," says Barbara. "We couldn't have asked for a kinder, more loving priest. Both Father Sweeney and the funeral director acted as soothing balms on our very scarred hearts."

When the head of Saint John Neumann's, Fr. LaHood, was made aware of what had happened at the Johnson funeral, he phoned Barbara to apologize. Barbara played for me Fr. LaHood's message. It left nothing on the table: his apology was sincere, obviously heartfelt and accompanied by every last means to reach him, including his personal cell and home phone number.

After Barbara later met with Fr. LaHood, she reported that, "He was very kind, compassionate and apologetic."

Even the Archdiocese of Washington rushed to repudiate Fr. Guarnizo's actions via this statement released Monday:

In matters of faith and morals, the Church has the responsibility of teaching and of bringing the light of the Gospel message to the circumstances of our day. When questions arise about whether or not an individual should present themselves for communion, it is not the policy of the Archdiocese of Washington to publicly reprimand the person. Any issues regarding the suitability of an individual to receive communion should be addressed by the priest with that person in a private, pastoral setting.

The archdiocese is looking into the incident at a funeral Mass that was celebrated by Fr. Marcel Guarnizo and will handle this as a personnel issue.

What else could they have said so early on? They're looking into it. That's only fair.

"Before we will feel resolution," Barbara told me, "my family wants a public apology from Father Marcel, and to see him removed from parish life. Our purpose is that he never be allowed to harm another family in this way again."

And in our thinking about this we of course also want to be fair. So then let us not fail to appreciate that in this matter, for this family, on this hallowed occasion, it was their religion, and their fellow adherents to that religion, that provided the peace, succor and communion that served to bless all present. Fr. Guarnizo's hatred of some people failed to eclipse God's love for all people, and if anything highlighted people's capacity for loving and comforting one another. Neither the Johnson family, nor the spirit of Barbara's mother, lost in this affair. The loss is entirely Fr. Guarnizo's.