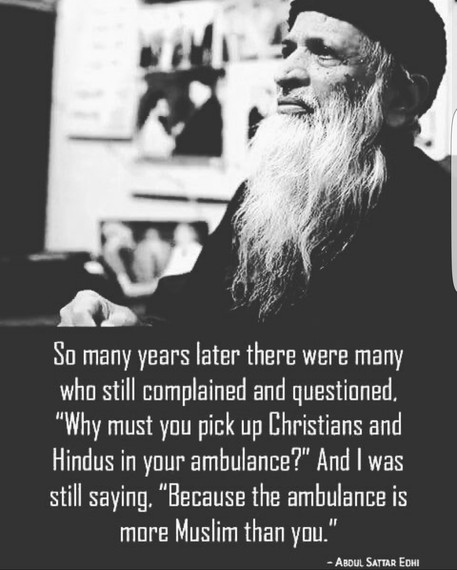 Abdul Sattar Edhi -- a man widely dubbed as "Father Teresa" -- recently lost his hard-fought battle against renal failure. Revered as a national and international hero, Edhi established an empire of heartfelt philanthropy from scratch. In 2013, Take Part stated that Edhi might be the world's greatest living humanitarian based on his remarkable efforts to alleviate the strains plaguing the mendicants along with many other hopeless widows, orphan children, and other needy people for whom nothing but grave clouds of oblivion seemed to hover over their futures. But what is astounding is that Edhi established this eon of prosperity out of nothing. A man with exceedingly humble means -- but a passion to help that knew no bounds -- Edhi conceived and gave shape to the Edhi foundation, which is now Pakistan's largest welfare organization. Since its inception, the Edhi foundation has rescued over 20,000 abandoned infants, rehabilitated over 50,000 orphans and has trained over 40,000 nurses. The foundation also actively runs 330 help centers, no less, in remote areas of Pakistan. But with that said, how exactly do Edhi's mind-boggling struggles affect us as individuals?

Pakistan has been undergoing turmoil since a long time now. Target killings are now a most commonly feared and known phenomena in Pakistan, from whose mischievous aftermath not even the celebrities are exempt. Recently, Pakistan's internet sensation -- Qandeel Baloch -- was heartlessly killed in cold blood by no one other than her brother. No assailant, no critic, and no nemesis sought revenge against Qandeel; instead, her own brother -- with whom she must have kicked pebbles in her childhood days -- strangled her to death in the name of "honor." I might not be well aware of such a patriarchal, bigoted and biased mentality personally, but which honor do these ruthless, depraved and obtuse-minded goons talk about, dare I ask? Is it the honor that leads them to slut-shame women who express their personal opinions regarding who they love and who they marry? Or is it the honor that has, without a single shadow of doubt, orchestrated what now seems to be inveterate fear and apprehension in women of pursuing their ambitions?

I will not go into all the know-how-why-and-what of "honor" killings in Pakistan for now -- that's for another time. But why I highlight this topic today is to acknowledge that in these gloomy times of illiteracy, intolerance and elusive self-righteousness, Edhi was a ray of hope, a rabbit-hole to a thousand smiles. For women like Qandeel, for brave, strong girls like Malala, and for million other hopeless orphans that no one cares enough about, Edhi was a father figure, a role model, and an ultimate source of glittering hope. And Edhi's contributions do not end just here. Be it a bomb-blast or be it a funeral in a local, obscure village in a forsaken corner of Pakistan, Edhi's and Edhi foundation's pristine efforts to ameliorate the almost non-existent welfare system in Pakistan are all to be lauded. In today's world, where not even our blood-relatives come to our rescue in times of dire need, Edhi's selfless demeanour, his wide, congenial smile, and his myriad contributions strike as even more noteworthy.

All of this is to say that for Edhi, religion was humanity, and humanity was his religion. A self-made man, who took to his grave merely a single shalwar kameez that he wore daily, Edhi is our true hero. Edhi's demise, although it has elicited innumerable tears, cries, wallow, and sorrow, also sheds light on a flickering possibility of improvement. But mind you, this improvement will be all but ubiquitous until and unless humanity becomes our unblemished priority rather than choice. Until and unless Edhi's religion of humanity binds us as one, until and unless we retreat from a war that has no enemy but intolerance and provinciality, until and unless we, rather than succumbing to our godforsaken "honor" and self-righteous rationale, emerge as compassionate, tolerant and empathetic people, we will remain tied under bloodshed and oblivion.

Edhi's death may be the end of a legend, a phenomenon that was Edhi. But Edhi's uncountable efforts and establishments -- both palpable ones such as Edhi foundation and impalpable ones such as the evocation of a need for tolerance and compassion -- continue to grow and burgeon seamlessly. Edhi's death is, therefore, the beginning of a challenge to change ourselves in light of acceptance that each of us must accept to stay true to Edhi's beneficence on us. It is the beginning of a new era of change, emulation of Edhi's idles, and the incorporation of these idles and morals in our daily lives.