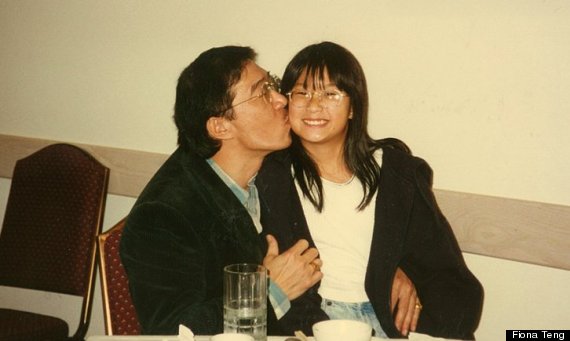 With a convincing mirage of confidence, a charming dose of wit, and a dash of overpowering cologne, my dad welcomes (more like demands) me for a scratchy moustache-kiss on the lips. My memory of dad is like my memory of my motherland Hong Kong -- a narrow, child's view, forever stuck at age ten -- the year when my family and I migrated to California without him.

Etched in my ten-year-old memory is my dad as the family philosopher with teachings and lessons suitable for all scenarios. He stayed out late for work just about every night and often missed dinner with the family. We would save him a plate many times just to find the plate untouched the next morning. Sometimes he'd join us for weekend adventures, but most times he wouldn't. I quickly grew out of a childish admiration for dad and into a confusing mix of intimidation, longing, and distance from this strange man.

After we moved to California and he stayed behind, I dreaded even more those prickly kisses when he visited or those long-distance chats when he called. I had nothing to say to this stranger. Visits turned into phone calls, phone calls turned into emails. Then, my parents' divorce became finalized and soon after he formally announced his abandonment of the family. We have not heard from him since. None of the momentary shock or emptiness could have prepared me for what would later come -- the sense of unworthiness that would rear its ugly head in future romances that indelibly marks the day my dad departed.

The history of my romantic relationships mirrored a common pattern. An infatuation that often started with curiosity and lightness inevitably became engulfed in a murky and confusing web of complexities woven into my past. Sooner or later, deep-rooted and inexplicable insecurities surfaced and unapologetically vanquished the realities of my otherwise happy relationships. Underneath petty fights, these insecurities were derived from a common place -- a belief that my romantic partner would abandon me because I am not worthy of his love. Underneath what felt like absolute, visceral truths, the emphatic side of me intuited a profound need for exploration and introspection.

I can't quite recall the exact ah-ha moment when I realized I wasn't "crazy" in my relationships. That there was a logically-sound explanation behind the recurring fears of being abandoned and periodic defeat from unworthiness. The reason, as it turned out, eluded me for a decade of confusing relationships and countless journal pages.

Jonetta Rose Barras writes in her book Whatever Happened to Daddy's Little Girl? about her experience and research with a condition dubbed the Fatherless Woman Syndrome. She practically opens the book with what I would consider the summary of my own revelation, "A girl abandoned by the first man in her life forever entertains powerful feelings of being unworthy or incapable of receiving any man's love." Slippery to grasp at first, the concept gradually took form as I began to understand the powerful yet simple human tendency to project -- as a child, I learned my unworthiness when my dad left; as an adult, I projected the same belief that romantic partners would leave just the same. The most dangerous thing about feeling unworthy is that I deprived myself of the most important love of all -- self-love.

Fatherlessness can impact daughters differently depending on its nature. Barras explains that a voluntary departure (i.e. divorce or abandonment) versus an involuntary departure (i.e. death) impact a daughter's psyche differently, where voluntary departures often result in the daughter's self-blame and feelings of unworthiness. From a macro perspective, fatherlessness on girls can have a detrimental impact on society as fatherless daughters have higher rates of teen pregnancy, greater sensitivity to stimulant drugs than fatherless boys, and in turn become mothers with low self-esteem.

How could I unpack such destructive and deep-rooted beliefs in myself? I recall confessing after a break up that "the best thing I can do now is learn to love myself." In a process much like a baby learning to walk for the first time, I defined what it means to give myself love:

This story of conscious awakening from fatherlessness, though painful, was the only way to beget healing. If anyone skirts away from fear or shame of exploring their childhood, I would posit this: The long-term dividends of a healthier you and subsequent relationships far outweigh the momentary difficulties of unpacking one's childhood. I owe it to the people that I love -- and to myself -- to bring my truest self to the table (childhood scars and all).

Father's Day is particularly moving for me as I celebrate with those who get to brunch with their dads. Personally, the day is a reminder of the deep gratitude I hold for my dad's presence in my life. I'm sure his lessons in soccer and wisdom in dating would have been plenty, but his teaching in self-love? I'll never grow out of that.