The bell rang. And what was one of the most anticipated fights of 1948 had begun. The Cuban Hawk, "Kid" Gavalan who had bolo-punched his way to be a top contender in the welterweight division, was going up against the Brooklyn born favorite, Rocco Rossano, known as much for his movie star good looks as he was for his quick hands.

Both were upcoming, yet accomplished (each with over 40 wins), though the two styles could not have been more different. Gavalan was a brawler with unpredictable moves and sledgehammer fists. Rossano was crafty and shrewd with the footwork of a flyweight and a rapid-fire jab that always seemed to find its mark. The sportswriters would say that by the time you threw a punch at Rossano he was somewhere else. It was the terrorizer against the technician. This was going to be good. Or at least it should have been.

As it turned out, it was all over in a matter of moments. Gavalan knocked out Rossano after only two minutes and four seconds of the first round and went on to become champion. As for Rossano ... he was through. Like so many fighters from the Golden Age of boxing, Rocco, who rose to meteoric heights of recognition, just as abruptly finished out of the top spot and out of the public's consciousness.

In boxing, anyone who isn't champ, no matter how highly ranked, is just on the short list of losers. That's what makes boxing the perfect metaphor for life itself. It's a microcosm of blue-collar existentialism -- harsh, unforgiving, brutally tangible and with the daunting reality of an inevitable fall from grace. Eventually, the cruelest of all enemies will get you -- age. Then there are the other variables. In the case of the Gavalan/Rossano bout, it's an example of how two men's destinies were decided by a series of circumstances that are both curious and contradictory.

That fight may be just a blurb in the record books, but to me, it means more. There's a history behind it that has not been told -- because it's known to very few people. I'm one of them. Rocco Rossano was my father.

Rossano's real name was Montanino. He used the alias as a form of I.D. to begin fighting professionally while still under age, dropping out of school in order to pursue his training. You see, in the post depression years, if you were one of nine children of immigrants, work opportunities were limited. Everyone labored at whatever they could get and wherever they could get it. And there wasn't much. Boxing was enormously popular and the tougher men got into the game for some quick money. Most didn't make it past a few club fights. The better ones made a few bucks (sometimes at the expense of their faculties), and the best went on to have a career, albeit a short one. Rocco was the youngest of the three Montanino boys who made it to the big time, and it was he who achieved the most success. He was a prospect, a "contender" and, ultimately, an also-ran.

By the time I was born, those days of glory and gore were all behind him and he didn't talk much about it. My dad never cared for the limelight and despised the phonies or, as he called them, the "hangers-on" who just wanted to bask in the temporary limelight until the next sensation came along. He dismissed his ex-celebrity status as a fleeting phase of youth. But the Gavalan fight ... that was the proverbial bitter pill that he never did swallow. 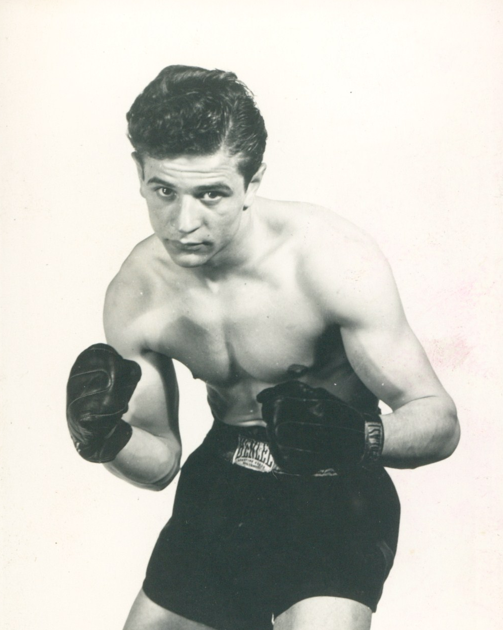 I'd watch his eyes as he grasped for the memories of the night that decreed his future. He'd play it down, but I knew... there's no way that can't hurt. He wasn't one for making excuses but until his final years he always claimed he was set up. He swore he was drugged and didn't even remember stepping into the ring that night. He assumed it was someone at the restaurant where he ate that afternoon who had a bet down on Gavalan. My mom suspected it was one or more of the shady characters in the inner circle who owed too much money to too many of the wrong people. It's the old cliché -- "he wuz robbed." His skills were exploited and eventually sold out by those in control who were greedy and corrupt. Things haven't changed much in the last half-century or so.

Throughout the years I often wondered how accurate that assessment was. Many fighters claim they don't remember getting KO'd, so my dad's recollection could hardly be considered accurate. Was his loss a rationalization that he just didn't have what it took to make it to the title? After all, Gavalan was one of the all time greats. Maybe his recollection was akin to the Christian Bale interpretation in The Fighter of Dickie Ekland whose claim to fame was that he knocked down Sugar Ray Leonard, though it was more of a slip. There were slight variations on the Gavalan/Rossano story, depending on who was telling it, but the consensus among friends and family members was that something was off that night, though no one had any more evidence beyond their own speculation. It's only natural that they would be biased.

I've come to accept the fact that people need to blur the memory of their failures and the boxing game is fraught with them. My dad did make some money, all of which he invested in a business that went bust within a year. He spent the rest of his life working on the docks in lower New York. After several years of hard labor, he managed to relocate the family to the suburban town of Elmont, Long Island -- quite a step from the streets of Brooklyn. Yet, all he had to show for those battles in Madison Square Garden and the St. Nicks arena were a broken nose and a tattered scrapbook. There's also a video, compiled of some film footage of a few of his fights. In one scene he's shown fighting Philly favorite Eddie Giosa, who had a piece written on him a few years back that appeared in The New York Times as one of the forgotten masters of the game in the "best ever" era of welterweight boxing. The video clip shows my dad knocking him out.

Rocco Montanino, aka Rocco Rossano, passed some time ago, and the controversy was set to rest for good, or so we thought. Just recently, when my brother Michael and I were going through some old furniture that had been in storage for years, we discovered some discarded memorabilia from dad's fighting days. Amongst the old clippings and faded photographs was an article in the May 29, 1948 edition of the New York Journal-American by famed sports writer Bill Corum titled "The Strange Night of Rip Van Winkle. What happened to Rocco Rossano?" In the piece he spoke of meeting Rocco in the dressing room minutes before the fight with Gavalan, expecting him to be warmed up and raring to go. He was asleep -- out cold in his robe on the table. No one else was in the room. It was Corum who woke him. He writes: "Rossano, just grunted ... looking like he'd give anything to just go back to sleep. He got dressed, but like a fellow who'd been waked in the middle of the night and had to go out on some unwelcome nocturnal errand."


Just as the announcement came on for the main event, Rossano's manager barged in and said "Let's go Rocky, you're on!" His eyes were glazed and he was laggard in his movements as he walked through the arena. Corum continues: "When Rossano got into the ring he was shaking his head as if he were trying to get himself fully awake."


Once in the ring, my dad was known to jump and fidget and throw blinding combinations in preparation to the encounter. Instead, his hands were at his side, which is where they stayed as he walked across the ring, defenseless. Within seconds he was down. Still, he rose to his feet, just to get floored a moment later. And again he got up. Finally, Gavalan gave his infamous windup and lethal overhead right hand and Rossano went down for the final count.


After reading that piece, something became very obvious to me. The stories and the claims that I presumed were exaggerations and justifications were indeed true. It was a set up for Rocco to lose. They knew he'd never throw a fight, so they made sure of it by drugging him.


It's taken a long time, but I see this as a vindication. My dad was a man who showed insight, integrity and surprising artistic ability (he drew and painted and did woodwork), but he grew up at a time when people of that social status didn't have the luxury of having their creativity encouraged or even recognized. So he brought that raw, innate talent into the ring and took it as far as it could take him in a field that most people can't imagine venturing into. But sometimes fate has other plans. At least I now know that, besides being one of the best in the world, maybe ... just maybe ... he could have gone all the way.

What was rightfully his was never fully realized, but now I know the truth. And I can see my father's legacy in a different light. The mystery is solved and along with it is the acceptance of both the tragedy and the triumph. The bell has rung. But this time, he's still standing.