The Father's Day offerings in most greeting card stores reveal a painful dearth of imagination and shockingly old-school views of men. It borders on being physically painful for me to cruise the racks in search of a card I might actually be able to give to my husband, the other father of my child.

For starters, there's the obvious issue that if I want a card that says "to my husband," it likely also says, "from your loving wife." Loving though I may be, wife I am not -- we're not exactly The Birdcage. But that's just the tip of the iceberg, for while I can live quite happily without any gendered marital lingo, it's harder to avoid the ridiculously butch iconography of cards for men in general.

It doesn't take being a gay guy to feel like the folks who create greeting cards aren't thinking of you. I know plenty of straight dudes for whom a card about huntin' and fishin' would be laughable (unless the hunting was at Whole Foods and the fishing was for compliments), and more than a few whose eyes glaze over at the mere mention of golf (which I think of as the Ambien of athletics). For anyone in love with a guy who doesn't embody the most classic hetero stereotypes, finding a non-sexist Father's Day card without a cigar, sports paraphernalia, or sailboat is like an annual quest for the grail.

I admit, it got a little easier for me to shop for a card when mustaches became a popular hipster motif, since my husband rocked a full-on handlebar at the time, but what to do now that it's shaved? And what about my interests? Good luck finding the card that shows Papa's Broadway tickets or Papa watching So You Think You Can Dance. My husband can always find yet another card with a tie on it for me -- I do love a cool tie after all -- but probably not a card that shows a dad meticulously color-coordinating his tie to his cute shoes or patterned socks.

Some clever capitalist somewhere ought to seize the day now and start cranking out a wide array of Father's Day Cards for the less macho. My daughter is just one of many thousands of kids who could make this genius rich. And because I'm so thoughtful, I'm happy to provide a few starter greetings for inspiration. (See slideshow below for the list.) 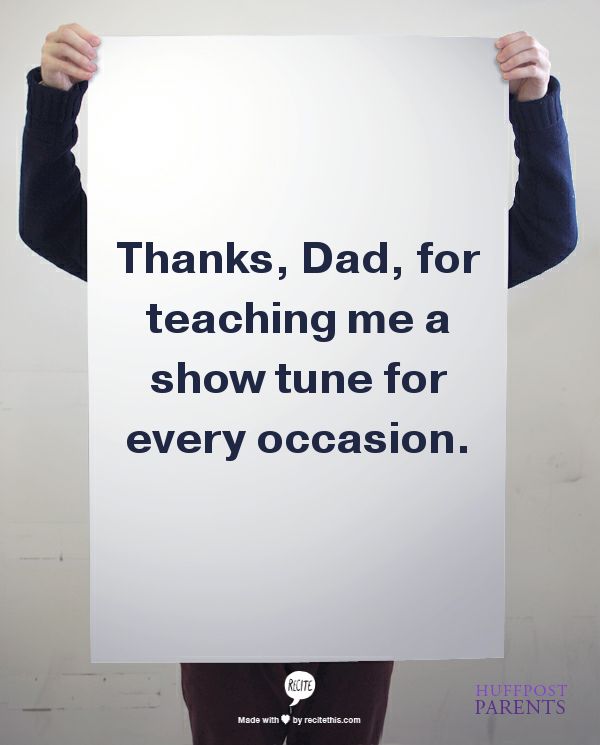 Ok, so maybe those aren't entirely universal sentiments either. I suppose, upon closer inspection, they conform to stereotypes, too -- if ones less common in the greeting card aisle (where, really, any change would count as progress).

I guess that's why we encourage our daughter to just make us cards from scratch. The results not only save her precious allowance money but, more importantly, better reflect her and both her dads -- not a golf club in sight.