Another holiday is upon us. Father's Day. It rolls around every year at the same time. Just as summer is off and running. Normally a gorgeous day spent poolside, grilling awesome food. The drinks are usually flowing. It has the makings for the perfect Sunday, except for one minor detail. My dad is dead.

Now for me, Father's Day isn't as big a deal as Mother's Day. It was always way more laid back. Just hanging out with dad. I'm assuming it's like this for most people because I have heard that Mother's Day is the biggest day for florists and Father's Day is the biggest day for collect calls. So I think it's safe to say that dads generally take a backseat to moms. And let's be real, they're not the ones who grew you inside of them for nine months and gave birth to you. I assume it stems from that, but I could be wrong. All that being said, Father's Day still really sucks when your dad is not here to celebrate.

My dad was diagnosed with terminal cancer a few months after my husband Beau and I got engaged. The doctors gave him three months to live (he was dead 74 days later). So we knew he would not make it to the wedding. And I was pissed. My mom was already dead and now my dad would be too. We decided to have a little ceremony at my dad's house so he could officially give me away. But that's not what I wanted. I wanted to have a freaking wedding like I had always dreamed of. I wanted both my parents to be there like everyone else in the freaking world. But that's not how it happened.

"Little" isn't a word used often in my family. There is nothing "little" about us or anything we do. Ever. So why I thought this would be any different is beyond me. Before I knew it, my dad had invited pretty much everyone. We had about 150 people in my dad's backyard. Under a tent. With a DJ and food and drinks aplenty. And it was awesome. It was the most amazing day of my life. It was the greatest party I have ever been at. My dad gave me away to Beau and we got to share our father/daughter dance. I can remember every second of it. I wish I could go back and relive that night. The only thing I regret about it is that my dad weighed less then me. You know, with him all dying of cancer. I was jealous. It's not polite to weigh less than the bride on her big day. It's just poor etiquette. But at least I was tanner. Way tanner.

My dad was an awesome guy. He was so full of life. Until he died. Then he wasn't. But he was really funny. Always making fun of someone in what he thought was a whisper. He loved a good nickname. I think he had one for every person he ever met. He also loved to cut the grass in his polyester softball pants sans a shirt. Being an orphan, there are so many unanswered questions, but that one would be at the top of my list. Why the polyester softball pants? I'll never know. 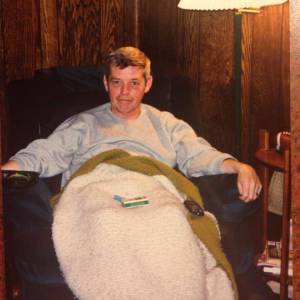 One of my favorite stories about my dad happened about five years before he died. My cousin Shelly and I were in Florida and somehow managed to miss our flight home. So we had to rent a car and drive from Florida to Chicago. But we only had enough money, between the two of us, to pay for the rental car for one day, so we had to drive straight through. My dad was waiting by the phone to hear from us every so often to know that we were still alive. I'm pretty sure no one in our entire family really thought Shelly and I were capable of finding our way home from Florida, including me and Shelly. So my dad had to run to the hardware store but he's waiting to hear from us. Then a light bulb goes off and he remembers that he has a portable phone. His problems are solved! He puts that five pound bad boy right in his back pocket and goes to the store. When he gets home the answering machine is blinking. It's me saying we're getting closer. Now how in the hell did he miss the call? He had the phone right there in his pocket the entire time. He was pissed. None of us could keep it together when he relayed the story later. The poor guy.

The thing that makes me happiest is that my dad really got to know Beau and loved him. Beau even got two nicknames. His highest honor. The first was Sparks. Hey, why don't you give Sparks a call and see if he wants to come for dinner. I bought a bamboozler of a roast that I know he'll appreciate. The name Sparks came to be because my dad claimed he never saw anyone who was so quick with a knife and fork. It actually produced sparks. A real term of endearment. The second nickname was The Biscuit. Now this came to be from the above said roast. One night as we all gathered around the dinner table to dine, Beau went ahead and split his biscuit down the center and put his meat on it and had a little sandwich for himself. This had never been done in my house. We were all amazed. We just stared. My dad couldn't get enough. He was in love.

My dad wasn't one for giving advice or telling you what to do with your life, which would explain why it took me eight years to graduate college. But he did tell me something the night I got engaged that was amazing. He said no matter what you want to do, just always make Beau think it was his idea. Every time I get what I want by doing this I picture high-fiving my dad. It's the reason we are still married.

So as Father's Day approaches again this year, I will try to prepare myself. I'll spend the day with my brothers and we'll have a few drinks and tell stories about our dad. It's really all you can do when you're trying to get through another Unhappy Fatherless Day.

Eileen O'Connor is an amazingly talented woman, wife, and mother living on the mean streets of Chicago's south side with her equally adorable family.