In honor of Father's Day, here is a sneak peek at part of the first chapter of Rising Son, about a 67-day, 2,500-mile bicycle adventure across Japan with my 8-year-old son Sho. The book will come out in fall 2012 and is intended as a reminder of the most precious gift a parent can give a child: time.

Three weeks is too long to be apart from your wife and infant son. After bounding through Asia with my boss -- presenting products to demanding customers in eight countries over 20 days -- I was back. Jet lag weighed on me like a monkey perched on my shoulders pounding at my head. My wife, our 6-month-old son cradled in her arms, waved enthusiastically as I entered the crowded airport arrivals lobby. I kissed her and looked down at my son. "Sho has changed. I can already see a difference in him from when I left."

"He's happy to see you back," she said with a smile, bobbing him several times, which drew a giggle. His eyes, excited brown lights atop puffed up cheeks, searched mine for a moment. Then he reached out with his fat arms, fingers splayed open.

As I pulled him to my chest, I whispered, "I won't stay away from you that long again." 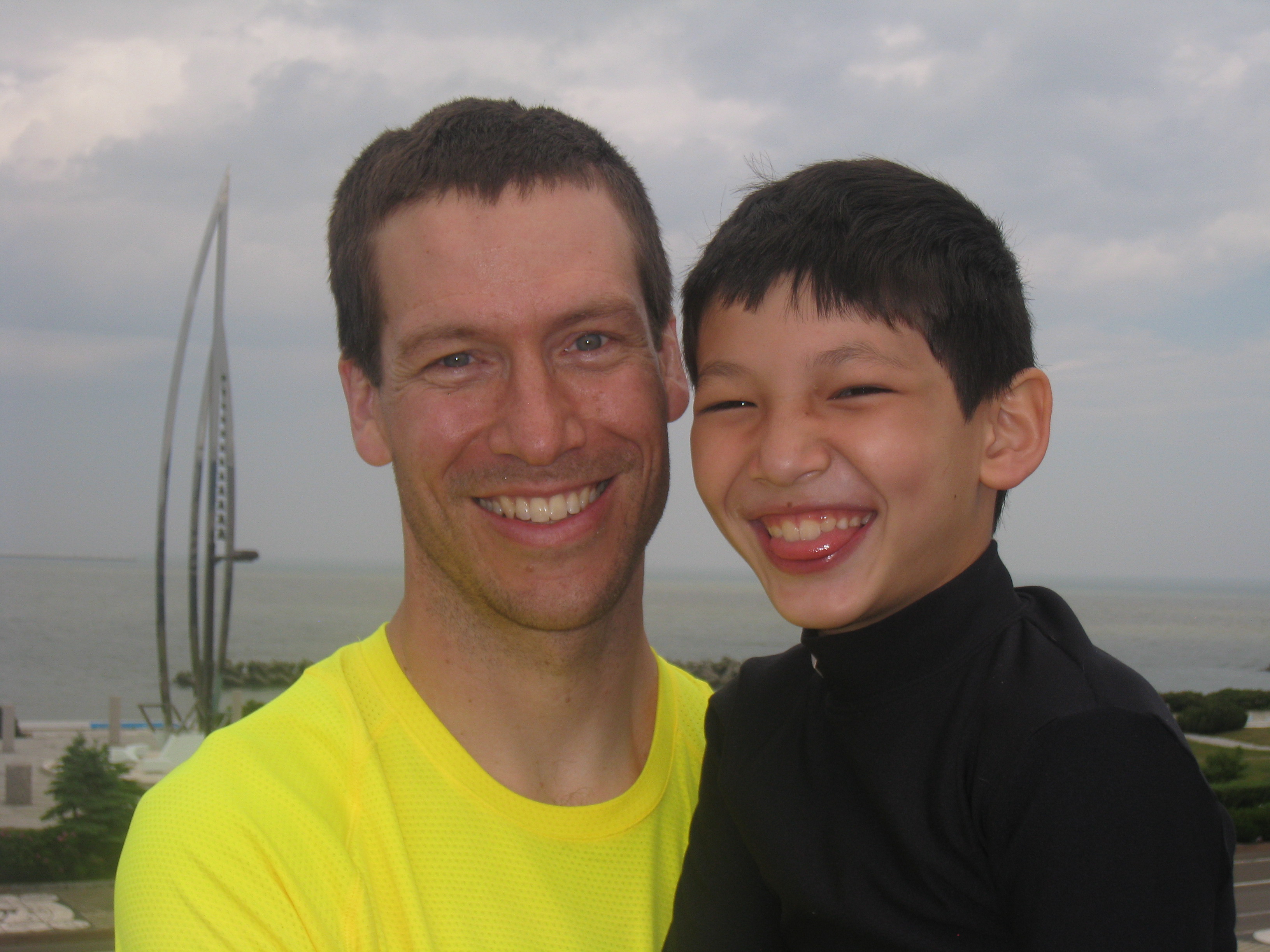 Seven years later, Sho and I were settled next to one another on a couch in our seventh-floor apartment in New York City, Pokémon cards spread all around. It was after his bedtime, but I had acquiesced to his plea for a few more minutes to play. I was making a list of life goals and didn't mind spending a little more time on it before putting him to bed.

Frowning over my list, I wrote, "Run a sub-three hour marathon." Then, "Create something of lasting value and social significance." I paused, considering what else to add. I was 40 years old, married, with two kids and a cat. I had worked at Intel Corporation for 11 years, and my wife was in her thirteenth year at the United Nations. We owned two cars, a 3,100-square-foot house in Westchester County and rented an apartment in New York City next to our son's private international school. Our financial commitments were high, a never-ending treadmill, but our incomes, as long as we both remained employed, were enough to meet the demands. Thanks to years of study, professional focus, and good fortune, we were stable, happy and secure.

And yet, I could feel some barely discernible psychic movement. Not exactly dissatisfaction, but a kind of push or call. As if I had been unconscious and needed to wake up. I had felt this for some time -- years, really -- but turning 40 prompted me to re-evaluate the hectic cycle of my work and family commitments. I decided to create a list of goals that reflected who I wanted to be and what I hoped to accomplish in the rest of my life.

The seven years since Sho's birth had passed quickly. When I held him on his first day of life, he fit the length of my forearm, his puffy, squinting, unfocused eyes staring up toward me, his mouth puckered as if he were trying to make a spit bubble. Soon, he was a boy actually making spit bubbles for me, playfully showing off how long he could keep one formed before it burst. I often sang Harry Chapin's "Cats in the Cradle" to him as he fell asleep, a song that laments how quickly a child grows, told from the perspective of a busy father who realizes too late what he missed. I knew that the next decade would disappear in an accelerating blur of business trips and rushed mornings. And then my son would fly away.

Tapping the pen against my chin, I wondered if there might not be a way to interrupt the hectic routine of our daily lives, create a space to slow down and appreciate more fully the precious and fleeting moments of Sho's brief childhood. I saw how easily I could spend the next 10 years of my life settled into a kind of status quo existence -- comfortable, but resigned to the limits created by our many financial commitments and the self-perceived need to maintain the accoutrements of successful professionals. Somehow, that path did not feel quite right.

I wanted to spend less time responding to an overwhelming flow of work and family demands and more time creating lasting memories. I wanted to seek out experiences that encouraged in my son a love of adventure and a fearless openness to challenge and growth. I wanted him to gain an orientation toward life as something to nurture and savor, and to consider each day something to treasure, not just to get through.

Finally, I wrote, "Dream up adventures with Sho." Staring at the list, I said, "Now that's a good one."

"What, Daddy?" Sho asked, not looking up from the Dialga card he studied.

"We need to come up with an adventure to do together."

"What kind of adventure?" he responded, looking up from his cards.

"Let's do something in Japan!" he replied. Since he was a baby, we had visited my wife's family in Tokyo annually for New Year's celebrations. Our trips lasted a week or two at most and were filled with socializing, visits to game rooms, Tokyo Disneyland and other family destinations. Sho's relatives treated him like a rock star whenever he came to town. No wonder he loved Japan.

"I'm fine with Japan. But it can't be the same old stuff we usually do. It's got to include some kind of challenge."

"We could ride our bikes to new places. I'm really good at riding now."

I liked where he was going. I thought he was too young to ride the streets of Japan on his own, but I recalled a friend telling me about an attachment that allowed a child to ride safely behind his parent. If I remembered correctly, he'd called it a "trailer cycle." It looked like a kid's bike, but instead of a front wheel, a curved bar extended out the front, connecting to the adult's seat post. The child could change gears and, unlike a tandem bike, pedal at his own pace. I could imagine cycling with Sho like that through Japan's countryside. With enough advanced planning, I could easily take off a week or two from work for such an adventure.

A week or two would be fun, but why not make it something more challenging?

I felt a surge of vitality at the idea of a long bike ride in Japan with Sho. What a great way to slow down time and create lasting memories. I thought about the internal push that had become more insistent recently. I did not want simply a challenging vacation with my son. I wanted an extended break and some breathing room to reflect on whether corporate life was still right for me. I appreciated the prestige and salary, but I felt that something was amiss. I was often exhausted and irritable from business travel and work demands. I didn't seem to have enough time and energy left over for my kids, my wife and my interests outside of work. I had no right to complain about my job, which was interesting and rewarding, but somehow it did not feel like a fit anymore. I hoped that getting away for two months might give me a chance to analyze this more deeply. Did I simply need a break or was it time to make a professional change?

"You know what would be really cool?" I asked, excitement growing in my voice. "We could cycle from one end of the country to the other. You could ride a trailer cycle attached to my bike to stay safe and help with the pedaling."

"Sounds great. Let's do it!" Sho said with a nod of his head, as if it were as simple as that.

I tapped my pen on the list, mulling over what we had just decided. I'd never attempted anything like it. No one I knew had. My family and friends would certainly consider it foolhardy, potentially dangerous and probably a sign of a midlife crisis. I didn't know how many miles it would be or how long it would take. But I knew a trip like that would last more than my four weeks of annual vacation. It was possible that I would be fired. What if my son were hurt or killed in an accident? Or declared that he wanted to quit one week into the trip? What if the bikes broke down in the middle of nowhere, or if I injured my knee and couldn't continue? The "what if's" kept coming but could not dampen the excitement I felt at the prospect of doing something so crazy and challenging with my son....

To receive an email when the book is available, send a note to icelandbikeadventure[at]gmail.com.

Adventure Speaker and author of "Daunted Courage: A Family's Bicycle Adventure on the Lewis and Clark Trail"