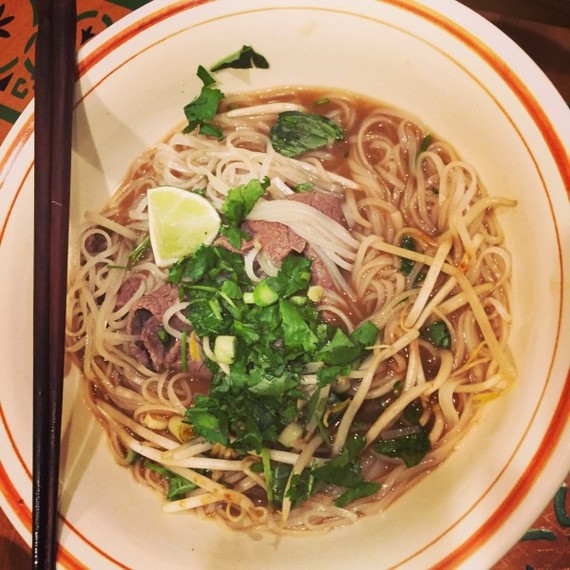 In the beginning, there was only chicken soup. It was the answer to most questions involving the common cold, inclement weather and general well-being. Then, the world became a smaller place and Vietnamese pho became as American as chicken soup.

The long-simmering, aromatic beef broth to which thinly sliced beef, rice noodles and condiments are added, has become, to some, a suitable alternative to the Mr. Fixitness of chicken soup.

While the initial waves of Vietnamese immigration were refugees, subsequent groups consist mainly of Vietnamese coming to be with relatives in the U.S., according to the migration institute.

During these four decades, Vietnamese immigrants brought with them their foods as well as their belongings. Americans were introduced to meat and herbs wrapped in lettuce leaves, spring rolls made in translucent rice noodles, the flavor of fish sauce and lots and lots of pho. There are Chinese and French accents in Vietnamese dishes, a reference to years of dominion by other countries.

Today, fish sauce and lemon grass are supermarket staples, and pho (pronounced FUH) is commonly available. My husband and I have it practically every Sunday night. Until recently, all that entailed was a phone call to the neighborhood Vietnamese restaurant for carryout. Then a friend came back from a trip to Vietnam where, she said, the food was a highlight. She and her husband were going to tell us and other friends about their trip at a pho dinner at a Vietnamese restaurant. (In Vietnam, like in other parts of Asia, pho and other soups are generally served at breakfast and lunch.)

I had long wanted to try making pho at home and volunteered to experiment for the travel dinner. I figured if it didn't work out we could go to the local pho restaurant for carryout.

Let me cut to the chase: It was delicious. And fun. And not hard.

For the recipe and technique, visit American Food Roots.