Adriana Kertzer is a multifaceted author who earned an M.A. in the History of Decorative Arts and Design from Parsons, The New School For Design, a J.D. from Georgetown University and a B.A. from Brown University. She is currently a member of the curatorial team of the Museum of Arts and Design focusing on the upcoming exhibit: New Territories: Laboratories of Design, Art and Craft in Latin America. Adriana just published her first book called Favelization: The Imaginary Brazil in Contemporary Film, Fashion and Design in partnership with The Smithsonian's Cooper-Hewitt, National Design Museum. Adriana's book is part of "DesignFile," a line of e-books on design writing and research published by the museum in consortium with academic and institutional partners. Adriana based part of her extensive research on case studies that look at the films Waste Land (Vik Muniz) and City of God (Fernando Meirelles), shirts designed by Fernando and Humberto Campana for Lacoste and furniture designed by Brunno Jahara and David El.

I read the book cover to cover and believe that Adriana has her finger on the pulse of a very interesting trend that hasn't yet been explored with the depth that she has. I went looking for favelization examples in the items or art pieces that I have either incorporated in my clients' projects or collected myself and found quite a few. I interviewed Adriana, and because I grew up in South America and know firsthand what she is talking about, I asked her my most acute questions. Here is what we both have to say about favelization: 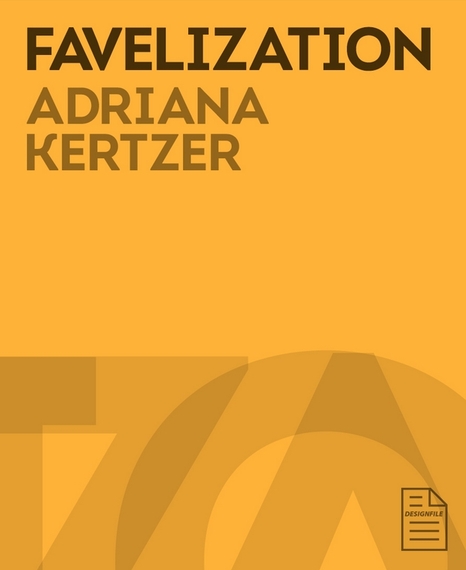 Maria Brito: I really love your book, and it's so smart and amazingly well-written and impressively supported with so many facts. I respect your point of view, but may not share it all the time. In my opinion, it's horrifying and perverse to market luxury goods or even exotic experiences based on the idea of life in the favelas. I'm Latin too and have seen favelas up close in a bunch of different cities and they are scary, sad places. However, at times, when I was reading your book, I felt that as an author, you may have been criticizing an artist, filmmaker or designer for glamorizing something so that isn't glamorous. But also, the way I see it, is that the designers and artists are byproducts of something that already existed, and that is in part the inheritance of corrupt and inefficient governments. Who let people build slums around the big cities because they were unable to provide decent housing, potable water, jobs, infrastructure and education? Was it a lack of resources that prevented proper urbanization and employment or the embezzlement and mismanagement of the public funds? At the end of the day, in my point of view, I see the governments of Brazil in the past 40 years to be guilty as charged for many of the failures of Brazil. Sadly, favelas are a social, urban and economic failure for any country that claims to be "developing." What are your thoughts on this?

Adriana Kertzer: I like how your question immediately connects my research on favelization to larger social, political and economic issues. A discussion about favelization (which I define as the use of references to Brazilian slums to brand luxury items as "Brazilian") requires that we address the difference between the meanings attached to favelas in Brazil and those employed by companies and individuals using references to favelas in the marketing of high-end products. Favelization also raises questions about the myths of racial democracy and intersocial class cordiality common in mainstream discourse about Brazil. Discrimination based on race, socioeconomic background, and place of residence are a reality in Brazil, as well as government inaction, mismanagement and corruption.

What intrigues me about references to favelas, in the context of luxury goods, is the disconnect between how I experienced (or not) favelas growing up in São Paulo and the frequency with which it is referenced in the marketing of design projects aimed at a non-Brazilian audience. My research focuses on the question: How did a symbol of Brazil's poverty, much maligned by the Brazilian press and often feared by inhabitants of the formal city, come to signify Brazilianness and attached value?

As a design academic, I recognize the limits of my awareness of the realities of favela life and the numerous government decisions (or inaction) that may have led to their growth in Brazil. What I do choose to speak forcefully about is the circulation of stereotypes in the context of the international luxury market. I am fascinated by the persistent need for the "exotic" among makers and consumers. 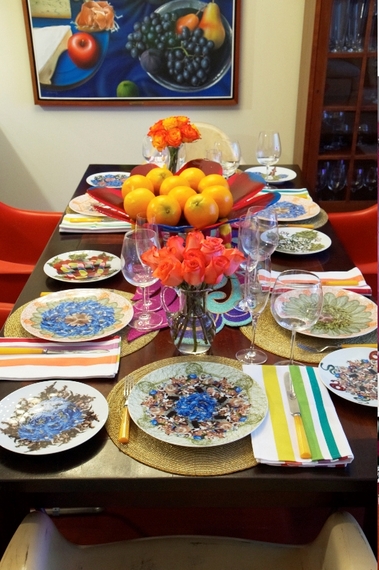 A "favelization" example of my own: The plates designed by the Campana Brothers in collaboration with Bernardaud displaying a collage of some of the brothers' most popular designs, including the favela chair.

MB: I went to the favela Mangueira many years ago to see the samba school rehearsing and to partake of their summer festivities. We didn't have to go super deep inside the favela, but what I saw was enough indication that life there isn't good at all. Yet it is very exotic, and I think that a lot of designers, filmmakers, artists and fashion people are toying with the following duality: On the one hand, is the idea of the edgy, borderline dangerous, a place hard to get in, but that could be very cool, and on the other hand is the quasi-altruist concept to bring awareness to the favelas and the poverty; it's almost like a part of them feels guilty of exploiting the favela concept to market luxury goods. Why don't you elaborate more on that duality? I want to hear your take on that.

AK: In the book I pose a series of questions: Is favelization evidence of a deeper cultural shift in which Brazil's poverty is repositioned as part of its national brand? Or is something else at stake in these endeavors that makes favelization a patronizing and opportunistic way of portraying the reality of a certain segment of the Brazilian population, fetishizing a space and its inhabitants, to brand products as Brazilian? In other words, are producers of contemporary Brazilian culture referencing an example of what "isn't very glamorous" in their projects because it is part of Brazilian reality? Or is their "quasi-altruistic" language evidence of a more problematic power dynamic? I bring in historical examples that show how other peoples and places regarded as "exotic" and "primitive" have been characterized as a desirable "other".

I try to make it very clear that my objective is not to measure intention (e.g. do designers intend to be altruistic). My focus is on objects and the storytelling, marketing and language used in connection with certain objects. This is a distinction that some of the critics of my book seemed to have overlooked, arguing that if only I knew (on a personal level) certain people better, my conclusions would be different. As a researcher of material culture, my focus is things and I follow the literature about them. It is not about intention.

MB: From a practical standpoint, it's only normal, I think, that artists like Vik Muniz and the Campana Brothers somehow use the favelas as a point of reference for their creations since the modern favela, as we know it, is a consequence of the Brazilian rural exodus of the 1970s. The gigantic, mega expansive favela didn't exist before that. So these contemporary artists who are more or less around 50-years-old have to be socially impacted by the favelas because they all grew up at the same time and in the same cities with them (the favelas) Don't you think? 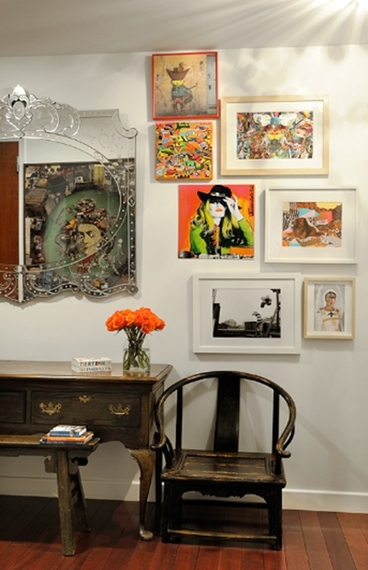 A Vik Muniz piece "Medusa After Caravaggio" from the "junk" series reflects on the mirror. The junk of this series was in many cases collected by the pickers of Jardin Gramacho in Rio or gotten straight from junkyards close to the favelas.

MB: I know that you refrain from giving any judgment or conclusion of what's good or bad from the favelization trend, but I'm sure you have to have an opinion and I really want to know it.

AK: Does favelization benefit favelas? I believe it is impossible to say. What methods would we use to measure impact? How do we draw a connection between movies, fashion and furniture design and actual favelas? Perhaps it is the difficulty of measuring the impact of favelization -- both positive and negative -- that makes it such an interesting issue. While I allow for the possibility that favelization may entail some positive impact, my research does not attempt to measure it.

I am optimistic about a number of things. I think it is fantastic that Brazilian design is receiving significant attention abroad. When I first submitted my thesis topic for approval at Parsons The New School For Design, I was told I could not write about contemporary Brazilian design because there were no professors on the staff that were experts on the topic. Now we have three major New York institutions preparing exhibitions for 2014 that include Brazilian design (the Museum of Arts and Design, MoMA and the Americas Society). Progress is being made in terms of how design history is taught: design from regions until recently regarded as peripheral is making its way into "the canon." This all means that producers of contemporary Brazilian culture will increasingly have their work discussed, analysed and potentially critiqued. Design studies is still a young field of study globally, and a robust tradition of design criticism does not exist in certain countries. After all, not all magazine articles and blog posts about design are design criticism. One designer featured in my book recently told me that he recognizes that being written about (even in ways he did not expect -- or like?) was important to design history and recognition of his work.

I am also optimistic about the impact my book can have on how designers craft their storytelling and describe their projects in the future, whether they agree with my arguments or not. Language matters and design is political. I hope that references to favelas will be made with greater awareness in the future.