A rhetorical debate, uneducated politicians, and a couple of religious extremists, flanked by a coalition of folks determined to see equality, set the stage for some very harmful journalism last night in Charlotte, North Carolina.

Many groups, including Equality North Carolina and The Human Rights Campaign hope that lawmakers in Charlotte will adopt several new protected classes on the books, to include nondiscrimination related to: sexual orientation, gender identity, gender expression and marital or family status.

Currently a transgender man or woman can be arrested and charged with a misdemeanor if their sexual organs do not match the gender label on the bathroom door. Cab drivers can throw you out of a cab for being gay. As a LGBT person you can be denied housing because of who you love and with which gender you identify.

In each of these areas, LGBT people in Charlotte can still be discriminated against, despite the arrival of marriage equality. Last night, Charlotte's city council continued a conversation to change that. A final vote could come as soon as Feb. 23.

The debate is a meaty one, so there's no excuse for inaccuracies or falsehoods.

However, instead of getting the news coverage it deserved, a very important and historic code being proposed by the HRC, Equality NC and many others was reduced to who ought not be able to use a women's commode.

Comer does not shy away from taking a stance against religious ideologues or the Press when they get a story wrong; especially as it pertains to our community.

Yesterday, when Comer phoned ABC's Charlotte affiliate WSOC to let Executive Producer Randy Wardell know that their coverage was sopping with slanted, incorrect and potentially harmful journalism, he was told:

"The station was simply expressing the main concerns as they emanated from the night's main point of debate," according to Comer. "Wardell said they were being 'Right down the middle,'" he continued.

Comer also reports that, "Wardell dug in his heels and disagreed with my assertion that the post (a) ignores completely the reality of who transgender people are and (b) insinuates, though slightly, that transgender women, in particular, are merely men in dresses using the women's restroom (one of the most common stereotypes)." 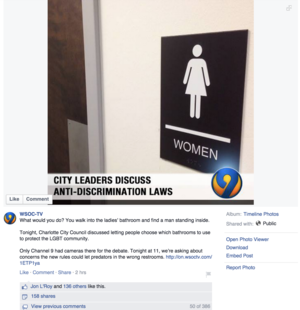 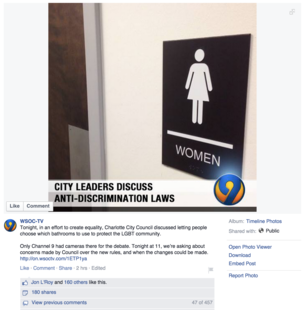 Their Facebook post and their news coverage "Portrays transgender people as potential predators and completely, utterly ignoring the reality of what was truly under debate by City Council, a mistake they repeated when they aired their newscast," he says.

The last time I checked there is not a force field keeping predators out of women's restrooms. Nor have I ever read where the transgender or gender queer community is known for preying on people.

Janice Covington Allison, North Carolina's first transgender delegate to the Democratic National Convention and the first transgender woman to be a voting member of the NC Democratic Women asked me, "Where does Charlotte's city council want me to pee? In the men's room where I can be remembered during the Transgender Day of Remembrance candle light vigil?"

Much like the Civil Rights Movement of the 1960s, we queer folk have celebrated every inch of equal rights we have been granted, while knowing we have a long way to go before being equal citizens under the law.

With each small victory, we realize that we have to push to come out the other side with equality.

Unfortunately for the transgender community, their need for rights are only now able to come to the forefront. They have always been there but have been misunderstood by almost everyone with whom they come in contact. Those rights are the easiest to deny, and it is shameful for a news station to attack the minority.

Chris Sgro, director of Equality North Carolina, says there is much more than where a person uses the bathroom that is in play here. He says that the coalition is "very eager to pass these very necessary protections."

Sgro touched on what the news coverage has not, that being LGBT in North Carolina is difficult.

"As members of the LGBT population we have been groomed to be more understanding of different folks. In other words, we have a strong understanding of what our population has lacked in rights. In this state you can legally be married and be denied (or fired) from jobs for being a member of the LGBT community. These protections are needed now more than ever," says Sgro.

Sgro related that the apparent lack of education regarding transgender needs is what causes most transphobia, even from the LGBT community.

Paige Dula, a transgender activist and member of the coalition, says that the misrepresented bathroom issue aligns itself with violence against transgender humans.

"People were commenting they had conceal and carry permits and if they ever came across a man in the women's room they'd be sorry," Dula says.

We entrust our news stations to report on political theater, not propel it. In this case WSOC owes an entire population an apology. Comer has gone further, telling the station to apologize for the stories, retract them and re-air a more accurate and nuanced piece.

WSOC does not seem to want to budge. Despite ongoing criticism, WSOC aired inaccurate reports and news teasers in their noon and 5 p.m. broadcasts on Tuesday, though the later version was slightly re-worked.

"WSOC continues to air inaccurate reports filled with transphobia, even after extensive conversations and concerns aired by LGBT community members and leaders," Comer wrote on his blog on Tuesday evening. "Is the station intentionally misinforming the public and intentionally stirring anti-LGBT and transphobic sentiment? At this point, the answer can only be yes."